10 Ways All The Cooking Shows Are Lying To You

I taught myself how to cook as a matter of frugality. And I do a lot of it. I’m the person who makes waffles on a Tuesday morning, and whose husband is the subject of officemate envy when he opens up his homemade lunch. I make my own chicken stock and salad dressings. I make entire dinners from scratch most nights of the week. I consider myself a reasonably competent, half-assed “home cook” (my favorite pejorative used by the judges on The Taste, which I watch solely because of my favorite living human being, Nigella Lawson, who loves the home cooks and that’s why her teams always get shut down first).

Cookbooks are fine, but when a task needs to be performed, I have to see that task demonstrated before I can replicate it. So I watch a lot of cooking shows. And the very important lesson – the most important lesson – I have learned from those shows is that they are dense with falsehood. 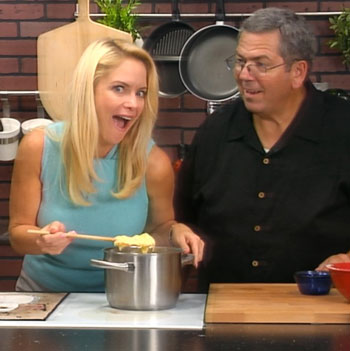 1. It’s fine if you measure everything incorrectly.

“Saute the onions in two tablespoons of olive oil,” says The TV Chef, as s/he pours a third of a cup of oil into the pan. I would name names here, I’m not trying to protect anyone, but this applies to almost every single person making food on television.

The other extreme is when they tell you to add ¼ teaspoon of vanilla extract or cinnamon or some other flavoring, and then they really do add that exact amount. Do you know what happens to that ingredient? Nothing. You will never taste it. It’s meaningless. Double it. Triple it. Especially cinnamon, if the recipe calls for it. Cinnamon the fuck out of whatever it is. You will not regret that.

Exception to this problem: Martha Stewart, who would never not have everything measured to the milliliter by a team of terrified assistants, who then go the extra mile by labeling the little prep bowls with the name and amounts of every single ingredient she’s using. I’m actually watching her right now as I write this and she’s explaining the history of some incredibly expensive mushrooms. God, I love her.

2. It’s fine if you don’t measure anything.

It’s all very millennial and cool and useless because the screen is full of close-ups of ingredients flying into a food processor while a club remix of a Florence and The Machine song bumps hard out of her kitchen, with little chyrons announcing “basil” and “pine nuts” and “olive oil.” But no measurements, whatsoever. Just various amounts, you know? Just whatever you like. In any quantity. Just throw food around. It’ll all land somewhere and get mixed up and be aces, mate.

I tried this. The end product resembled a meatball made of lawn trimmings.

3. You can chop up those vegetables in a heartbeat.

No, you can’t. Remember that part in Julie and Julia where Meryl Streep chops a metric ton of onions just to learn how to do it right? Guess what you’re never going to do unless you quit your job and go to culinary school? That’s right, learn to fucking chop like these people.

Instead, you will be like me, chopping slowly, badly, and stupidly, routinely slicing off tiny parts of your fingers.

A companion rule to this injury truism is that you are also going to scorch your own flesh off your hands at least once a week from accidentally touching a variety of hot metal pans and dishes. At this point, I don’t have nerve endings anymore. It’s an okay life. 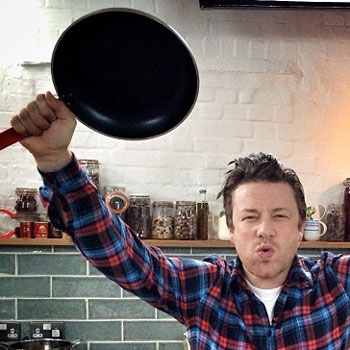 Oh, you don’t? Well, then, you don’t get to eat beautiful foods, I guess.

Look, just go drop $100 on a nice Le Creuset model. Then sign up for Amazon Prime for $72 and you can get free shipping. Two hundred dollars later you’re ready to make a crepe. NO PROBLEM.

5. You have harissa in your refrigerator. Also gochujang.

See crepe pan situation above. If, like me, you live in a big city, these ingredients are available, just not in grocery stores. You have to go to the Korean or Middle Eastern markets, which is fine, or to a fancy specialty market, which is not fine, because awful people are always crowding the latter.

Also, Kelis is there, too, buying out the store, but that’s not a problem, really, because she’s beautiful and cool and you forgive her because she sang “Milkshake” and was with Nas for a long time, and she has a fun cooking show of her own on TV, where there are very few lies being told, at least from what I can see.

Anyway, if you don’t live in a big city, you have to buy this stuff online and wait around for days and just eat Hamburger Helper until it shows up in the mail. 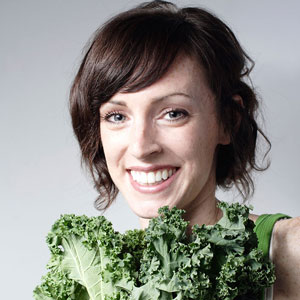 6. Kale is a delicious, healthy substitute.

That pesto I mentioned earlier? With the basil and pine nuts and stuff? That turned into a lawn meatball? I was told by the TV person to substitute kale for a healthier alternative. So tasty in its own way, she said. So I did that. Guess what it tasted like? Fucking kale.

Jamie Oliver is the main perpetrator of this one. Dude has his own show actually called Jamie’s 15-Minute Meals. There’s a little timer at the bottom of the screen and everything. His team of sous chefs and kitchen servants pre-wash his produce, open his containers, measure his ingredients, chop everything up and prep his presentational boards – he serves everything on colorful wooden boards, don’t ask me why, it’s stupid – and then he glides through the recipe, juggling aubergines, shouting, “Oi!” and jamming to “Buffalo Stance.”

I have made recipes from his show. They take an hour. At least. Usually longer. They are delicious. I serve them on plates. I don’t own colorful boards. Where would I put them, in my colorful board cupboard in my 36 square-foot apartment kitchen? Oliver is a blond guy, and blond lies are the worst lies. 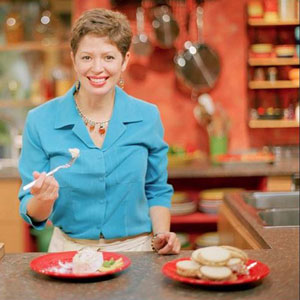 The legit chefs call this mise en place. It means keeping a neat work area, having everything at the ready, and wiping up spills and messes as you proceed. If President Stewart is guilty of anything, it’s this one.

There’s no such thing as cleaning as you go. My kitchen is a constant disaster. Currently it looks like the aftermath of a fight scene on Banshee, a Cinemax series I love that’s about people beating the shit out of each other. I’m looking at my kitchen from my dining room writing “office” right now and I see two forks lying on the floor, victims of last night’s meal. I had my hands full of stuff, so I just kicked them into a corner and figured I’d pick them up and wash them later. I will… I just haven’t yet.

9. Anyone can make food beautifully presentational.

I am reminded of the Super Bowl. Every cooking segment on every talk show that week involved shaping food into footballs. Roll that cheese log in pretzels and shape it into a football. Shape your meatloaf into a football. Decorate it with little chopped chives to resemble football laces. Cut your paninis into little football shapes. THIS MATTERS SO MUCH TO YOUR MOUTH. YOU CAN’T FUCKING EAT ANYTHING ON SUPER BOWL SUNDAY UNLESS IT IS FUCKING FOOTBALL-SHAPED. FOR SECRETARY’S DAY YOU WILL DYE AND SHAPE THAT COOKIE INTO A RED SWINGLINE STAPLER OR YOUR ENTIRE LIFE WILL BECOME ABOUT DEATH.

10. You can totally enjoy your own dinner party and still pop back into the kitchen to quickly whip up a beautiful chocolate mousse dessert, which you will then serve in a set of gorgeous matching martini glasses-as-bowls.

Hornet Users Tell Us About Their Best (and Worst) Valentine's Day Ever — in Exactly 10 Words
On a Very Special AITA: “Am I Wrong for Putting My Penis in a Jar of Peanut Butter?"
This All-Queer 'Legally Blonde' Table Read Celebrates Pride Month and the Film's 20th Anniversary
Super Nintendo World Is Now Open! Here's Everything We Know About the Theme Park
English