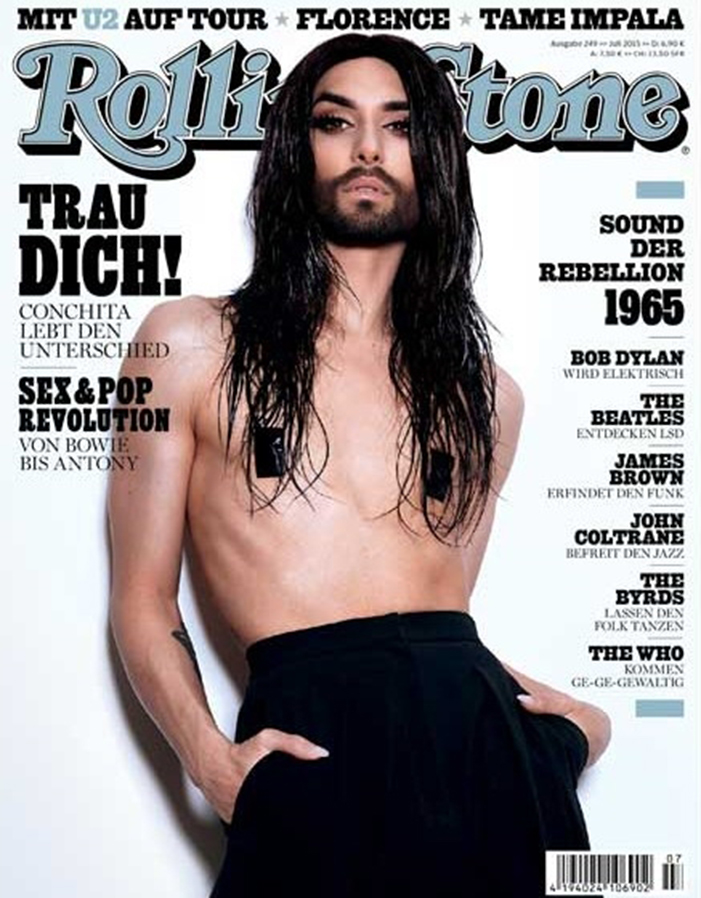 Conchita Wurst — the bearded, openly gay, Austrian drag queen who won the Eurovision singing contest in 2014 — has been chosen to grace the cover of Germany’s Rolling Stone in a topless shoot. All I have to say is, “Yassssss bitch you better werque!!!!”

In the article, Wurst discusses the many obstacles that the LGBT, queer, and intersex communities are facing nowadays and how some of these boundaries are being broken down.

“I think there are many people who have internalized tolerance, who want to understand how other people live,” said Wurst. “But it’s a still a long way until we arrive.”

In another portion of the interview, she states that she believes many do not have connections to “the lesbian-gay-transgender-community” and that the resulting ignorance and non-acquaintance are the “root for insecurities and aggressiveness.”

Wurst’s 2014 Eurovision victory irked the notorious anti-gay Russia who emptily threatened to hold their own anti-gay version of Eurovision in retaliation. Since her win, Wurst has performed at Pride events across Western Europe and in the European Parliament and Vienna’s United Nations Office in Vienna — she has kinda become a symbol of inspiration for LGBT Europeans. And did we mention that she also recently released a self-titled pop album? Gurl is on FIRE!

It’s amazing the impact that Conchita still has on the European world and it goes to show that you can use Eurovision for other formats besides just singing really cheesy songs.

These 5 Video Game Characters Illustrate the Evolution of Trans Representation in Gaming
Drinking Beer Can Be Healthy: A Dietician, a Counselor and Two Brewers Tell Us Why
7 Times TV Got HIV-Positive Characters Right (and One Series That Never Bothered)
And the Academy Award Goes To: Kristen Stewart's Transformative Princess Diana
English