Written by Kevin Farrell on March 4, 2011
Be first to like this.

The Pew Research Center for the People & the Press has released a buttload of new statistics and demographic information about the American people, as it does each year.

Among the findings, Americans are untrusting of the federal government, Americans have an unfavorable view of Congress, and over half of the country believes abortions should be made legal for all women no matter the circumstance.

The real meat of the study though is the fact that 45% of Americans now favor allowing gays and lesbians to legally marry, while 46% oppose the matter. While we’re still outnumbered (just barely), the swelling in our ranks is nothing short of momentous. Just last year only 42% approved of gay married, and in 2009 only 37% of the country supported us. In just two years, we’ve managed to convince 8% of the country that we are constitutionally guaranteed equality just as they are. That’s 24 million people! 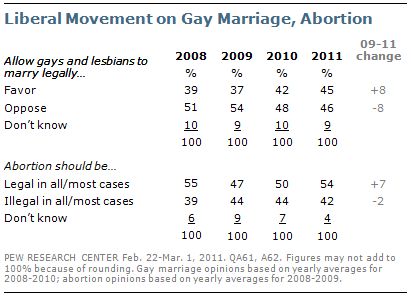 All of this means of course that this time next year, the majority of Americans will support marriage equality. Again, the majority of the country will support gays and lesbians right to legally wed. Don’t be dismayed when you hear anti-gay politicians speak out against us. 2011 is the tipping point in our great struggle. From here on out, we’ve won. The American people are with us in ever-growing numbers. Marriage equality is on the horizon.

Are you stoked to see these figures or what?

Virtual Human Rights Event to Screen Film About Indonesian, Russian and Kenyan LGBTQ Families
Farewell Ellen! Here Are 5 LGBTQ Celebrities We'd Love to See Take Over Daytime TV
ACT UP Was Unofficially Founded 34 Years Ago, Changing the Face of Queer Activism
Under the Cover of Night: 10 of America's Most Famous Gay Cruising Spots, Past and Present
English