5 Problems Besides Whitewashing in the Film “Stonewall”

Written by Daniel Villarreal on September 28, 2015
Be first to like this.

The forecast was correct. Roland Emmerich’s Stonewall was a whitewashed mess and it tanked in its opening weekend. So seeing as you’ve either already seen it or aren’t going to, we spoke with our film writer Johnny Gayzmonic (who saw the film) and listed out five other problems it has beyond white-washing (as well as one good thing it has going for it):

None of the film’s sex is positive, joyous or revolutionary. Sex is always portrayed as something that’s secret and shameful or forced with horrible repercussions afterwards.

Danny hooks up with the high school quarterback and gets disowned by his family; after arriving in New York City, Danny gets pimped out to frightening old dudes and twice we see him crying while a guy blows him for money. Ray, a flamboyant hustler, gets beaten up by a trick (which actually happens sometimes, although it’s a definitely a tired film cliche). The one time the sex is consensual and not for cash, it’s between Danny and an arrogant, sleazy, smooth operator named Trevor (played by Jonathan Rhys-Meyers), and even then, the film shows them under the covers with Trevor kissing Danny’s chest and then fades to black before we can see any actual enjoyment or butts.

While self-loathing, predation, danger, and punishment still go hand-in-hand with gay sex around the world, Emmerich’s decision to focus on gay sex as seedy, coercive and shameful reflects a wholly negative and rather conservative idea of how gay sex operates: It’s predatory, desperate, dangerous and denigrating rather than joyous, loving or revolutionary. Wouldn’t it have been great if Danny got revolutionized after having amazing sex with a person somewhat unlike him?

Also, considering the recent federal raids on Rentboy.com, the film seems to support a growing conservative view of sex work as dangerous and shameful — an opinion echoed by the uninformed, wealthy white female celebrities who opposed Amnesty International’s call to decriminalize sex work.

2) The film reduces the Stonewall Riots to a white kid’s coming-out experience and exalts him as “the way to be.”

Sure, police violence and familial rejection surround the Stonewall’s patrons, but the police decide to conduct the raid only after they get wind of Danny being pimped out by the bar’s mafia owners. Only then do the cops decide IT’S GOT TO STOP… even though lots of other hustlers pimped out by the same bar have been getting beaten up and even murdered for god knows how long.

Let’s be clear, Danny’s situation in Stonewall is temporary. Before coming to New York City, he has a super-supportive sister and semi-loving, middle-class family (compared to the flamboyant Ray whose family is in jail or missing), he has a scholarship to an Ivy League school, good health and has only been subject to New York’s abuses for barely three months whereas the other characters have been down-and-out their entire lives. They get regularly harassed by the police for wearing women’s clothing and acting flamboyant (unlike the “straight-acting” Danny). And all the time, the other hustlers compliment Danny on being so good looking and having so much potential, in a seeming desire for his life and potency.

Because Emmerich does such a poor job showing Danny’s transformation from midwestern farm boy to quasi-gay activist and a similarly bad job showing how bad the queer community at large has it, it seems like Danny kicks off the Stonewall riots just to spite an old hookup.

Right before the riots, Danny takes a brick away from another hustler, discouraging them from starting trouble. It’s only after viewing the sleazy, suit-and-tie, assimilationist activist (Trevor) who broke his naive little heart earlier in the film that Danny goes apeshit. Trevor sees the brick in Danny’s hand, shakes his head and says, “No Danny, that’s not the way,” to which Danny responds, “No! It’s the only way!” and then he hurls the brick declaring “Gay power!”

The real-life riot was started by those who had suffered lifetimes of abuse and had nothing to lose by revolting compared to Danny; compared to them, Danny had everything. Granted, this follows a loooooong tired trope of the white-outsider saviors rescuing the native outcasts a la Dances with Wolves, The Last Samurai, and Avatar.

Since he’s the hero of the film beloved by all the other characters — and one who escapes sex work and street living — Danny becomes an aspirational figure while unwittingly diminishing the lives of queer people of color without college educations, familial support, porn-star good looks, or the experience of being cared for and sheltered by sugar daddies. 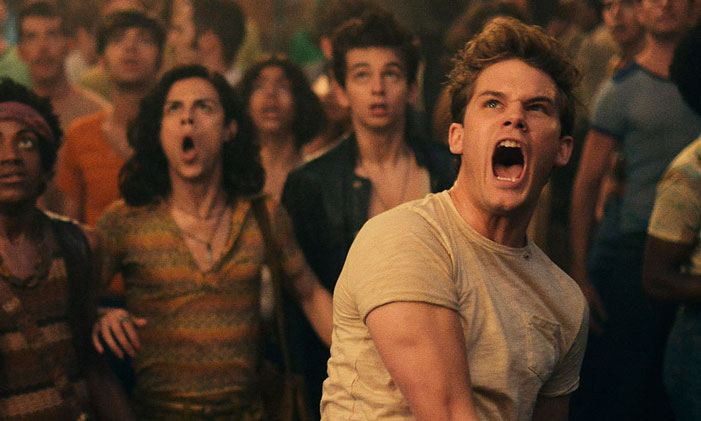 3) It’s about a white guy who starts shit with the cops and leaves poor, queer people of color to clean up the mess.

Remember: The actual Stonewall Riots lasted for days. But in the film, after just one day of rioting, Danny decides he’s had enough and decides to climb into the Ivory Tower of Columbia University and he doesn’t come back to the Stonewall UNTIL A FULL YEAR LATER.

That’s right: he starts a riot that destroys the goddamned neighborhood and leaves the de-escalation, the community rebuilding, the activism and everything else to all the poor sex-workers, transgender folks and people of color. Then when he comes back, everyone’s happy to see him; no hard feelings for starting a violent, days-long riot and abandoning them.

Even better (or worse?), Danny gets to reap the rewards of his actions as his mom and sister attend the city’s first-ever Pride parade held a year after the riots, thus restoring his birth-family and his reintegration into wholesome Americana. Don’t worry, mom. Your son is no longer a smeggy, bedraggled street hustler; he’s a “respectable” academic with stable student housing; ambitious, well-educated peers and job prospects!

It’s basically a long, reductive “It Gets Better” commercial that ignores the ambitions and realities of the impoverished, homeless people and people of color who suffered the most and had the most to lose. 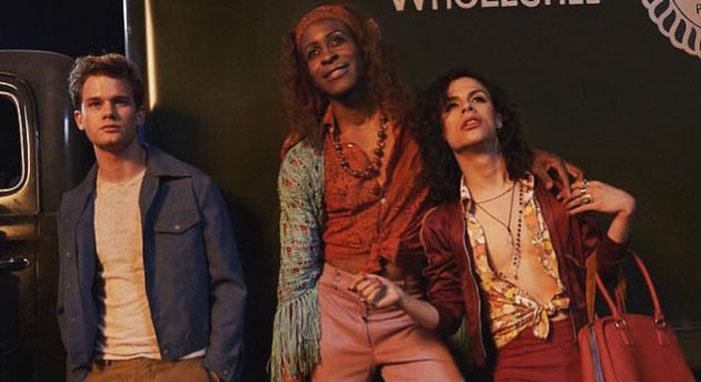 4) Emmerich could have made any movie he wanted, but he made cold oatmeal.

Emmerich largely financed the film with his own money and worked with a non-major studio. As a proven film veteran with wildly successful action blockbusters under his belt, it’s likely he had freedom to do as he wished. And yet, he placed a straight-acting white guy as the focal point because, as he said, “As a director you have to put yourself in your movies, and I’m white and gay.”

Before Stonewall, Emmerich had never directed a gay film or ever directed any gay characters. Even though he got a GLAAD award (ostensibly for being successful while gay), the only thing he has ever given the gay community in film is a 20-second slow panning shot of Jean-Claude Van Damme’s backside in Universal Soldier. He has also promised a gay character in the Independence Day sequel, but Lort knows how that’ll go. Perhaps a gaylien?

Truth of the matter is that Emmerich’s films are all largely shallow with super-flat cartoon characters lacking any complexity. He does the same in Stonewall by passing over the large number of real-life participants — including actual street hustlers, butch dykes and queer activists — and reducing their embodiments to one or two personality traits based on how they dress: One street hustler looks like James Dean, one looks like a Beatles member with a mop top, one looks like a dirty hippy. Even the character who plays real-life Stonewall instigator Marsha P. Johnson shows up halfway through and serves only as comic relief.

While the film largely excludes women and trans people, at the end a message appears on the screen saying “This film is dedicated to the unsung heroes of the Stonewall Riots.” At which point our film reviewer stood up in the theatre and screamed “Fuck you!” because Emmerich had two hours to tell those stories, but instead he pushed them aside in favor of a bland piece of Sean Cody white bread that didn’t even exist.

Emmerich said that straight audiences wouldn’t be able to understand the film or be sympathetic to the characters if Danny wasn’t a gateway character that they could relate to. That’s kinda bullshit when you have shows like Transparent winning Emmys, Laverne Cox on the cover of Time magazine, and massively popular shows like RuPaul’s Drag Race.

The film ends up being a collection of stale tropes without much emotion or new insights into the riots other than that they happened. Critics have agreed that it’s badly written and directed with almost no compelling emotional through line. So LGBTQ audiences won’t see the film because it doesn’t represent them or their history, and straight audiences won’t see it either because it’s crappy.

Meanwhile, Danny’s character is so bland compared to all his peers that it’s hard to imagine the audience feeling like him either.

The only good thing about the film…

Ray, played by Jonny Beauchamp who is given the role of Danny’s flamboyant hustler friend, is the only actualized and fully human character who doesn’t just serve as window dressing, but represents a person with a soul and a heart. Beauchamp recently portrayed a transgender sex-worker named Angelique in the last season of Showtime’s Victorian-horror series Penny Dreadful. Here’s hoping we see more of him in the future.

This Artist Is Giving Us The Sexy Pokémon Trainers We Never Knew We Needed
Austin Crute, a Quadruple Threat, Is Our Swoon-Worthy Guy of the Week
Chechnya's Horrific 'Gay Purge': A 4-Year Timeline of Abduction, Torture and Murder
Let Joan Collins Teach You How to Pack Like an Ass-Kicking Diva
English