Written by Hornet Staff on February 16, 2015
Be first to like this.

In its first eight hours the website Racists Getting Fired, a blog where internet vigilantes took screen shots of racist comments on Facebook and Twitter and “outed” these people to their employers, receiving over 15,000 submissions. In less than a week it amassed 40,000 followers.

Many companies received complaints about their employees as a result of the blog. AMC Theatres held its own internal investigation about Brianna Rivera, an employee who had allegedly posted a racist comment on Facebook calling Ferguson protestors “apes” and Africa “fucking dirty and Ebola ridden.” It turns out that the comments were falsified by her angry former boyfriend in an attempt to get her fired.

This illustrates why sites like Getting Racists Fired make horrible tools in the fight against racism. Allow me to explain:

THEY MAKE FRAMING OTHERS EASY: It’s easy to frame folks with false posts from fake accounts on social media — all you need is an e-mail address and a photo! In the case of the AMC employee, her ex-boyfriend simply changed the name on his Facebook account, put up some new photos and then submitted a screen grab of the comments directly to her employer. 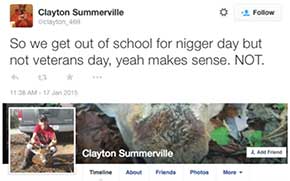 IT WON’T CHANGE MINDS & HEARTS: A website like Getting Racists Fired tries little more than to intimidate a group of people whose opinions are highly unlikely to change in the first place. Racist beliefs become entrenched over a lifetime and get dissolved by actually relating to people of other races. Sure some of the site’s offenders may have been contrite after getting reprimanded by their employers, but getting fired won’t likely change racist beliefs. In fact, it may well deepen them.

IT OVERSIMPLIFIES A COMPLEX ISSUE: The website also unfairly propagated the idea of racism as a white-versus-black issue which is a small (albeit significant) piece of a much larger and complex issue. In essence, this blog sought to finger a few offenders and punish them using the outrage of the African-American community as a scourge. 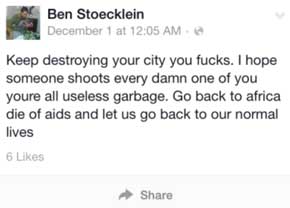 DOXXING IS WHAT THE BAD GUYS DO: Publishing other people’s personal information is called “doxxing,” and it’s a common tactic that’s also been used to intimidate progressive, non-racist folks.

For example, just last year actress Felicia Day had her home address posted online and began receiving rape and death threats just for speaking against the largely misogynist GamerGate movement. Similarly, anti-abortion activists like the Army Of God and Army Coalition of Life Activists (ACLA) have long published the names and addresses of doctors, nurses, feminists and pro-choice advocates fostering a dangerous climate for violence.

SOMEONE COULD GET HURT: Getting fired is one thing, but a violent web-surfer could easily use a person’s workplace address to stalk and hurt someone. In just two weeks, the individuals featured on the blog and the blog’s owner all received numerous death threats. But anyone who punishes social media users on their blog as a political lightning rod should know it’s only a matter of time before similarly threatening clouds appear on their horizon.