If there was an award handed out for the most hated group of all time (Nazis excluded), it would definitely have to go to members of the Westboro Baptist Church. For decades now, they’ve picketed funerals of fallen soldiers and protested against any modicum of LGBT equality using day-glo signs stating that OBAMA IS THE DEVIL!

But if we take a second to see beneath their vitriol, we’ll find something more beneficial. Aside from their hateful attempts to mock civil rights, the Church has done a damn good job starting a dialogue for important social issues. Don’t think so? Check these out:

Oh, free speech — one of America’s founding principles. Anyone can say anything the hell they want no matter how many people disagree. The WBC might say that FAG SEX is to blame for 9/11, Ebola, or the death of Mother Teresa, but I can come right back and tell them to stop shouting and start showering because they look like something found underneath Willie Nelson’s tour bus. It’s a two way street – and they’ve proven it in a court of law!

You see, in 2006, the Westboro peeps attended the funeral of Marine Matthew Snyder with their trademark “BITCH BURGER” and “SOLDIERS DIE, GOD LAUGHS” signs. Understandably, Snyder’s family was pretty ticked, so they sued to keep the WBC from protesting soldier funerals ever again. But, a federal appeals court eventually ruled that the church’s picketing fell under the constitution’s free speech protections. In 2011, the Supreme Court again ruled in their favor, stating that they were entitled to first amendment rights.

Margie Phelps, the daughter of the minister of Westboro, who also happens to be a lawyer, told the Associated Press in 2011, “We read the law. We follow the law. The only way for a different ruling is to shred the First Amendment. I think it’s pretty self-explanatory, but here’s the core point: the wrath of God is pouring onto this land. Rather than trying to shut us up, use your platforms to tell this nation to mourn for your sins.”

Ain’t that something? She wants everyone to have free speech, even people who like BITCH BURGERS! Well allow me to demonstrate a perfect example of this free speech. Check out Margie’s parody of Lady Gaga’s “Poker Face.” In it, she sings a beautiful rendition of the song with her daughters — she’s a regular Maria von Trapp! Don’t you just love the Bill of Rights?

When you’re dealing with a group as bonkers as the Westboro Baptist Church, you’re bound to see some equally passionate folks rebuking their hatred. From pissed-off grannies and guys dressed like Jesus to grown men in diapers, girls wrapped in bubble wrap, and dwarves dressed like Satan, it’s the greatest show you’ll ever see. Here are a few of my favorite counter protest signs: 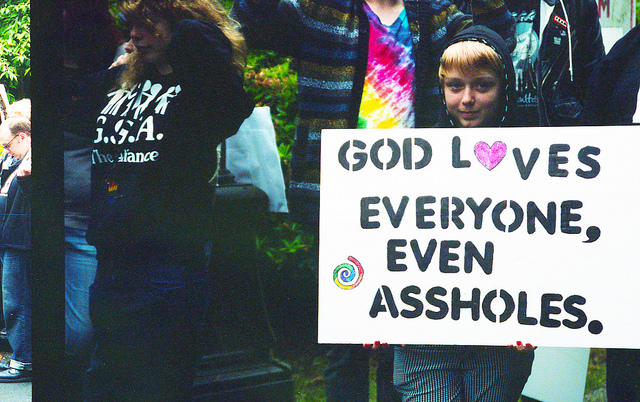 Despite the funny slogans, the most poignant counter protests have been those with no signs at all. At the military funeral for Sterling William Wyatt in Missouri, hundreds of friends, family, and community members surrounded the entire funeral so the family wouldn’t see the WBC’s signs.

At a memorial service in Aurora, Colorado for the victims of the 2012 mass movie theater shooting, counter-protesters created a “human chain” five miles long so drivers-by would see their messages of love rather than the hateful signs that the WBC threatened to bring. Fortunately, the church never showed up to the memorial.

Westboro eptomizes the word “radical”, even going to such extremes as to turn off even the the Ku Klux Klan, who counter-protested the church during a funeral in Arlington 2011.

Even the “extreme” hacker group Anonymous took them on. After the church threatened to picket funerals of the Sandy Hook Connecticut school shooting victims, Anonymous hacked into Westboro’s website and released its members’ personal information. They even hacked WBC’s Twitter accounts. Not soon after, the WBC website was taken down. When a group like Anonymous, whose targets tend to be big corporations, steps up, it starts a conversation on the limits and usefulness of free speech and radicalism.

#4) Their presence has helped raise money for pro-LGBT causes.

Westboro’s protests are so baseless they’re welcomed with not only counter-protests, but counter-fundraisers as well. When WBC protested a Panic! At The Disco’s concert last year, the band responded by giving money to pro-LGBT causes for every member of the church who showed up. They donated an even $1,000 plus 5 percent of merchandise proceeds from the show. In response, the Human Rights Campaign raised funds to match the band’s generosity. Other celebrities, like comedienne Lisa Lampinelli, have staged similar counter-actions which have accumulated into thousands of dollars for pro-LGBT to WBC’s extremism over the years.

#5) They’ve shed light on the dangers of ignorant thinking in a surprisingly peaceful way.

It’s hard to defend anything the Westboro Baptist Church says and does. For many people across the world, their actions speak multitudes about what happens when radicalism overrules logic. The United Kingdom and even the friendly country of Canada banned them, stopping them at the Niagara Falls border, according to CTV News.

Their very presence starts conversations, and whether we like to think so or not, they’ve became a prime example of how important it is to inspire our children to think critically. The young children holding their hateful protest signs have shown us the dangers of ignorance in powerful ways.

It’s clear they WBC has done more to hurt their side than help it. Unlike other hate groups though, they haven’t set houses on fire nor killed people. As loud and hateful as they are, they engage us in the public square rather than forcing entry into our homes. They appear on radio, TV, documentaries and all other media, which shows they at least have the courage to start a dialogue. I’d rather have that than the alternative.