6 Cool (and Cheap) Things To Do in Tel Aviv

Read the news and you might not expect it, but Tel Aviv is one of the world’s coolest cities. With amazing nightlife, trendy bars, great food and a unique beach-city culture, Tel Aviv has one of the most exciting and interesting atmospheres—just as cool, hip and trendy as bigger cities like London or New York. Tel Aviv, sometimes called the Miami of the Middle East, is actually more like a Shoreditch or Brooklyn with its bearded hipsters in tank tops, its craft beer bars and its 24-7 culture of hedonism.

6 COOL (AND CHEAP) THINGS TO DO IN TEL AVIV 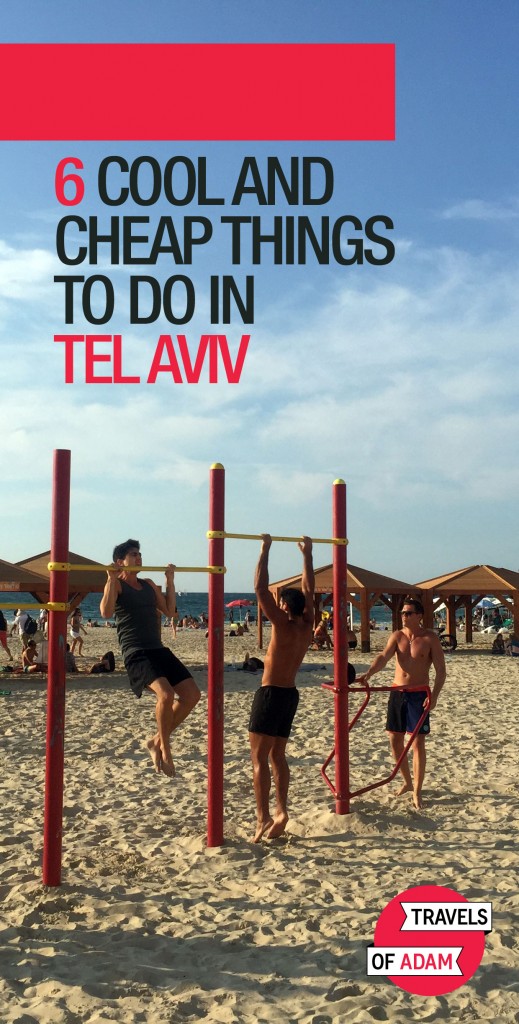 No true hipster city is complete without a network of bike paths. Tel Aviv’s bike paths run alongside the beach and through pedestrian-friendly areas like Rothschild Boulevard. Tel Aviv’s municipality runs a bike-share program, called Tel-o-Fun, making it easy to rent bikes by the day, week or month. For a single day, you can pay from 17 shekels and you can use the bike an unlimited number of times in 30-minute jaunts. It’s one of the best ways to get around the city when public transportation isn’t quite as reliable (especially on Shabbat).

In Tel Aviv, it’s all about the coffee—whether its the carefully crafted brews at trendy cafés like Cafelix (Levinsky Market, Merhavia 4), or just the fact that every restaurant and café in the city has outdoor patios meant solely for the joy of people-watching while enjoying cold coffee on a summer day. Coffee is a serious business in Tel Aviv. My personal favorite is the frappuccino style served by most coffee shops—maybe not the trendiest or the most artisan style you’ll find, but there’s no better way to stay cool. A popular coffee chain in Tel Aviv is Cofix which offers all their drinks at a fixed price of just 5 shekels—that’s just over 1€ for a small, delicious coffee!

Street food in Tel Aviv is some of the world’s best. There’s a thriving food scene in Tel Aviv, with top quality restaurants fighting for the same attention as the sidewalk street vendors, but some of the best food in Israel is surprisingly simple. Think falafel, hummus, fresh vegetables and grilled aubergine. And while shawarma and falafel are popular Middle Eastern food exports, in Tel Aviv you have to try the other local specialities, something like sabich. This popular Israeli sandwich is also stuffed into a pita, but with fried aubergine and a hard-boiled egg instead of fried chickpeas or meat. And it’s absolutely delicious. You’ll find it at many falafel stands, but there are some specific vendors who sell just it. Look for it near the Shuk Ha’Carmel food market in central Tel Aviv.

The counterculture and leftie liberal attitude of some Tel Avivians has made the city ripe for street art—plus the whitewashed Bauhaus architecture and rundown buildings lend themselves perfectly to a bit of graffiti and stencils. Some of Tel Aviv’s most famous street art murals are located in the Florentin neighborhood, just a short walk from the southern end of Rothschild Boulevard, on the way to Jaffa and Neve Tzedek neighborhoods. If you’re looking to get a better understanding of Tel Aviv’s street art, make your way to the Friday afternoon tour led by guide and linguist Guy Shareet, from the popular Streetwise Hebrew podcast. The tours operate both as a basic Hebrew lesson (zero experience required!) and as a tour of Florentin’s ever-changing graffiti and street art.

Enjoy the free books on the beach

There’s something special about the Tel Aviv beaches. Besides butting up right against the city (downtown, no less), there’s a beautiful promenade decked out with free exercise equipment, city bikes you can rent and countless beach bars and cafés. The boardwalk is often crowded with performers, buskers, skaters and music regularly fills the air—whether from topless guys blasting it out of their phones or from impromptu drum circles that pop up on the northern beaches during each sunset. But perhaps one one of the coolest things you’ll find on the beach are the mobile libraries—carts decked out with books (in Hebrew, English and other languages) available for free or to exchange. You’re meant to leave used books and take what you want, returning them if you can. And for those with kids, there are even some beaches (Hilton and Mezizim beaches) where the city offers sand toys for children—for free!

Related: Is it possible to visit Tel Aviv on a budget?

Located just off of Rothschild Boulevard, Tel Aviv’s newest hostel opened this spring.Abraham Hostel Tel Aviv is part of a popular backpacker and solo traveler brand operating also in Jerusalem and Nazareth with modern, social hostels. The hostel’s lounge doubles up as a bar with regular events and parties that often attract just as many locals as tourists. Dorm rooms in the hostel are surprisingly spacious, as are the private rooms. And really: the location can’t be beat! The hostel is located within walking distance to some of Tel Aviv’s best nightlife, including many of the city’s best gay and LGBT bars. And it’s still only a 20-minute walk or quick bus ride to the beach! Check rates for their dorm rooms or private rooms on their website —and mention TRAVELSOFADAM for a special discount!

The 'Golden Girls' Themed Cruise Is Back for Diehard Fans in 2023
The Gay Sex Circuit: 6 Exercises to Make You an Athlete in the Sheets
This New Six-Part Webseries Documents Andrea Mares's Yearlong Transition Journey
Way Before the Age of Social Media, Cuddle Parties Dominated Hookup Culture
English