A Connection Between Sesame Street and OSU’s Racist Frat Song?

Written by Daniel Villarreal on March 11, 2015
Be first to like this.

The video of tone-deaf Sigma Alpha Epsilon douchebags singing a racist song has resulted in nationwide condemnation, the fraternity’s banishment from the University of Oklahoma, and two student expulsions with more fraternal disgrace soon to follow.

But it may surprise you to know that the song’s origin lies close to Sesame Street. 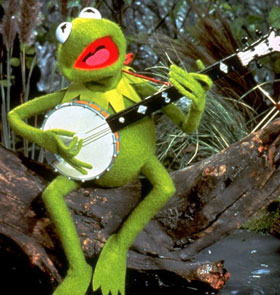 The melody closely resembles the 1971 children’s song “If You’re Happy and You Know it,” credited to Portuguese-American songwriter Joe Raposo. Better known for his Sesame Street hits “C is for Cookie” and “(It’s Not Easy) Bein’ Green,” Raposo was also a capable blue and jazz musician who incorporated ragtime, soul and funk stylings into his other Sesame Street and personal works.

How ironic that song maker with such deep respect for African-American music should have one of his children’s songs distorted into a racist sing-along.

Interesting side note though: Raposo was also a 1958 graduate of Harvard College and wrote several musical scores for Harvard’s Hasty Pudding shows, an annual burlesque crossdressing musical comedy that had been criticized in 1980 for racist depictions of Asians.

10 Film Actors Who Had the Balls to Go Full-Frontal On-Screen
These Hornet Users Had Our Favorite Posts of the Past Week
In the Late 1980s, Nintendo Revealed That Super Mario Has an Uncircumcised Penis
We Love These Disney Princes Reimagined as Adorable Queer Couples
English