Admit It: This Is The Worst Season of ‘RuPaul’s Drag Race’ Ever

Written by Daniel Villarreal on May 10, 2015
Be first to like this.

Am I the only one who doesn’t give a fugg about any of the queens on RuPaul’s Drag Race this season? In past seasons of the drag reality competition, I LOVED the winners and was consistently wowed by the competitors: Manila Luzon, Adore Delano, Nina Flowers, Pandora Boxx, Alaska Thunderfuck, BenDeLaCreme — gagging!

This season I can’t tell most of the queens apart and even the ones I do like, I couldn’t really give a crap about (yeah yeah Ginger Minj, yeah yeah Pearl) — none of them have really brought any style, flavor, or personality different from what we’ve seen in past seasons. No wonder Ru herself cussed some of them out for being sloppy, unprofessional queens.

When I shared this sentiment online, a friend of mine replied, “You’re 100% right. Vacuous and uninspired children with NO sense of history or culture take up most of the show, and it seems that’s the best it can do.”

Another friend echoed her sentiment, saying, “I know drag has its roots as a form of self-expression for poor kids who experienced a lot of discrimination. I understand and value that aspect of it. But one thing I liked about past seasons of RPDR is that they seemed to make an effort to bring in some queens who have more educated backgrounds and intellectual approaches. I think queens like Raja, Jinkx, DeLa, Bianca, Chad Michaels, etc. brought something to the show that this season is just missing.”

Then a final pal said, “It’s just so ‘blah’ and there is almost no diversity in this casting. It’s very clear more so than ever who Ru is keeping on for ratings purposes.” He’s right. You had only to watch the first episode to see through the show’s manufactured drama between ageist Kandy Ho and aging Tempest Dujour. They’re leaving inferior queens on the show in the name of drama. 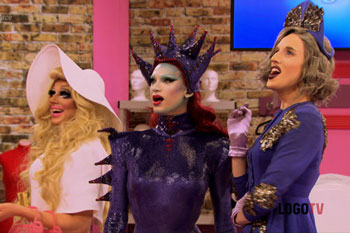 Truth is, I have a lot of respect for RuPaul and the show. Ru is an American drag ambassador who has done great work to raise HIV awareness and GBT performers on her show. She’s not so different from Andy Warhol, churning out multi-media stars in her Drag Race factory; stars who will continue her legacy after she passes. It’s a great idea.

But long-time fans of the show understand that this season is less about legacy and more about production. As we wade through the acting challenges — waiting for Snatch Game and the inevitable sewing competitions — we’ll have to hope for a more kick-ass season eight. In the meanwhile, here’s some changes Ru might wanna consider to keep things fresh:

1) Have a sewing challenge upfront: That’s right, let’s separate the wheat from the chaff, at the outset.

2) Have three queens lip-synch for their lives sometime: Often more than two queens deserve to be up for elimination; let’s see how Cerebus does onstage, eh? Then axe two or all three of ‘em — Ru doesn’t play!

3) Less acting challenges, puh-leaze: In this age of online media, Ru wants as many funny clips out of her queens as possible. But there’s equal drama, animated GIFs, and video outtakes to be had from backroom drama as the queens cut cloth and each other to pieces — let us see it! 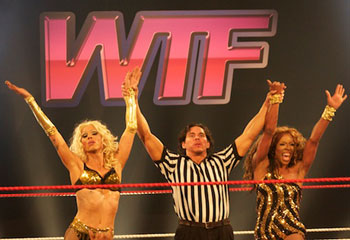 4) Have the mini-challenges actually benefit the winners: Remember when winning mini-challenges got you first crack at the materials, extra time to polish your work, or a supportive call home? These days, winning them often gets you saddled with burdensome leadership roles that earn you blame rather than fame.

5) Bring back drag queen wrestling: Season four episode two had us gagging with WTF!: Wrestling’s Trashiest Fighters. It had insane costumes, campy acting, physical comedy, and was a helluva lot of fun to watch. Bring it back. Hell, turn it into its own goddamned show!

And Carson Kressley, I wanna see you tear into a bitch (maybe Mitchell Visage, maybe one of the other queens… I don’t care which, just do it. Do it now.).