Every Thursday, the riders, roadies and volunteers on the AIDS/LifeCycle put on an extravagant show that both visually unites the riders and brings awareness to the forefront of that day’s ride.

Today also marked the first day that I wore a dress – a fabulous, shimmering kimono that I instantly Hulk’ed as I attempted to squeeze my frame into. 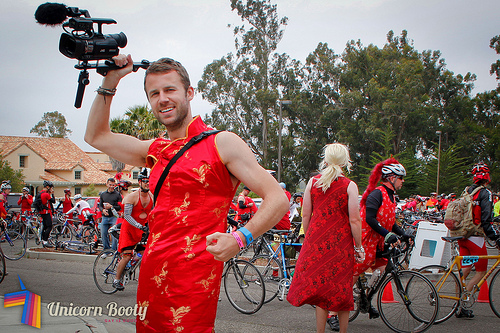 It was powerful to see the red ribbon of riders pedaling through the winding turns through the California hills; just like a long red ribbon, the riders were living and breathing vessels of awareness that brought the fight against HIV/AIDS to communities that might not have the enhanced awareness that urban dwellers enjoy. 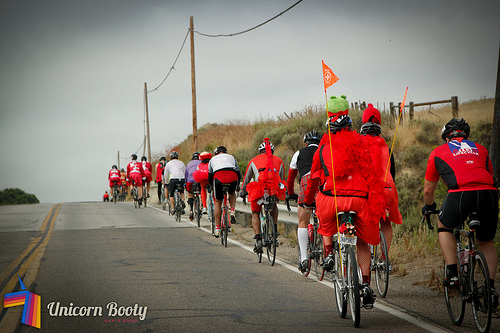 Awareness is an essential issue, because – as I reported earlier – one in five American gay males have HIV, and among those with the disease, half don’t even realize they have the disease.*

The ride takes many backroads, and goes through small towns that rarely see gay people. There are also many fundraising stops, where schools set up shop and sell food, coffee and flair (hand-made by students!), which in turn supports their year-long school budgets. Students are helping to sell the goods, and in turn are learning a valuable lesson in diversity and AIDS awareness.

*There were a couple of comments on Facebook regarding this story that I wanted to address. First, it is untrue that one in five humans in the United States has HIV. This statistic refers exclusively to gay males.

Secondly, to Jonathan Philip Batiste: I am not telling anyone what to do. I am sharing the intense awareness that has been growing during my time here on the AIDS/LifeCycle ride, and showing how vital it is that we are all tested and aware of how HIV is impacting our community. I am also a journalist; I tell stories. Sometimes they are my own, but mostly they are others’.

This is my job. I am simply sharing the stories that have affected me in my life, and I don’t think that my desire to keep my private life private diminishes the power of these stories in any way. How can we argue that we, as gay men, are ignoring a crisis that affects one in five in our community? Well, the fact that so many people have become infected means that people seem to not see this as an issue any more. Gay men need to be comfortable talking about HIV status – and insist on knowing the status of their partners.

Remember When Chumbawamba Worked With the Sisters of Perpetual Indulgence?
Juanita More, Legendary SF Activist, on the Legacy and Significance of Pride
Hornet Live Is Here! 5 Things to Know About Hornet's Latest Exciting Feature
Here Are 5 Different Flags You're Likely to See During Pride Month 2021
English