Democratic Sen. Al Franken Is the Latest to Stand Accused of Sexual Misconduct

This morning, Leeann Tweeden, the morning news anchor for Los Angeles radio station KABC 790 AM, accused Minnesota Senator Al Franken of sexual harassment. Tweeden says the Al Franken harassment incident happened during a USO Tour in December 2006. She says Franken repeatedly kissed her without consent and then then groped her while she was asleep.

In an essay posted to KABC’s site, Tweeden tells her story. She was on her ninth USO tour with Franken as well as country music artists Darryl Worley, Mark Wills and Keni Thomas. Some of the Dallas Cowboys cheerleaders also came on the tour.

At the time, Franken was not yet a senator and was best known as a comedian and former Saturday Night Live star. He’d written some sketches for the show and he asked Tweeden to take part in one:

When I saw the script, Franken had written a moment when his character comes at me for a ‘kiss.’ I suspected what he was after, but I figured I could turn my head at the last minute, or put my hand over his mouth, to get more laughs from the crowd.

He continued to insist, and I was beginning to get uncomfortable.

Tweeden says Franken wouldn’t let up about rehearsing the kiss, and she finally relented “so he would stop badgering me.” However, she says it wasn’t a chaste kiss:

He came at me, put his hand on the back of my head, mashed his lips against mine and aggressively stuck his tongue in my mouth.

I immediately pushed him away with both of my hands against his chest and told him if he ever did that to me again I wouldn’t be so nice about it the next time.

I walked away. All I could think about was getting to a bathroom as fast as possible to rinse the taste of him out of my mouth.

On stage, they performed the sketch as written where Tweeden turned her head so Franken couldn’t kiss her on the lips.

Tweeden says no one saw what had happened in the rehearsal. She says she didn’t report it at the time because she “didn’t want to cause trouble.” Though after the sketch, she says she avoided Franken as much as possible and made sure never to be alone with him for the rest of the tour. She says in retaliation Franken repeatedly insulted her and would sometimes draw devil horns on headshots she autographed for troops.

This wasn’t the end of it, however — she fell asleep on the plane home almost immediately. She didn’t realize anything had happened until she received a CD of photographs from the trip. One of the photos showed Franken groping her breasts through a flak jacket.

In 2014, Franken himself shared the same photo on Twitter as a joke: 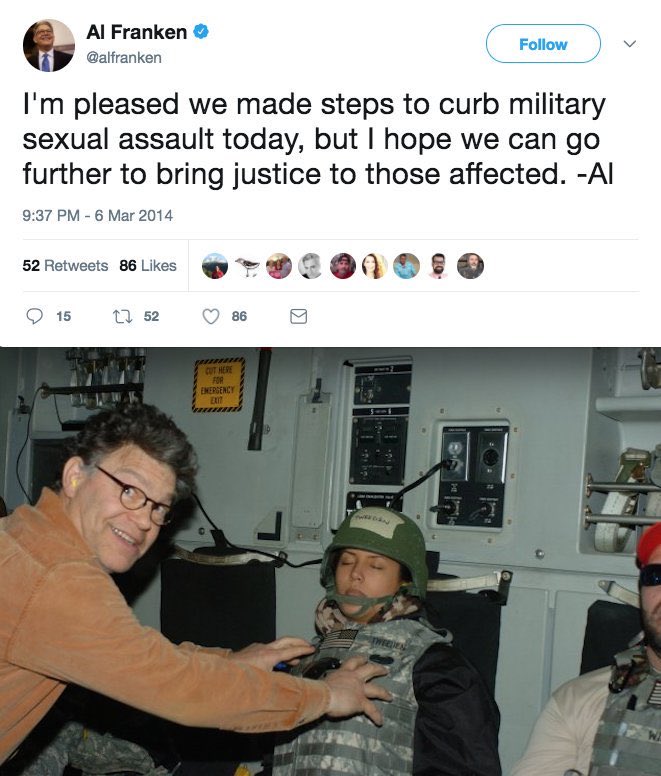 Franken released a number of statements today. The first was very brief, “I certainly don’t remember the rehearsal for the skit in the same way, but I send my sincerest apologies to Leeann. As to the photo, it was clearly intended to be funny but wasn’t. I shouldn’t have done it.”

He issued a second statement hours later, apologizing more fully and calling for an ethics investigation against himself. He wrote:

The first thing I want to do is apologize: to Leeann, to everyone else who was part of that tour, to everyone who has worked for me, to everyone I represent, and to everyone who counts on me to be an ally and supporter and champion of women.  There’s more I want to say, but the first and most important thing—and if it’s the only thing you care to hear, that’s fine — is: I’m sorry.

I don’t know what was in my head when I took that picture, and it doesn’t matter. There’s no excuse. I look at it now and I feel disgusted with myself. It isn’t funny. It’s completely inappropriate. It’s obvious how Leeann would feel violated by that picture. And, what’s more, I can see how millions of other women would feel violated by it—women who have had similar experiences in their own lives, women who fear having those experiences, women who look up to me, women who have counted on me.

Oh, Girl, No! The 10 Most Hideous Female Superhero Costumes in Comic Book History
That Should Have Been Gay: The Most Homoerotic Scenes on Film in the Last Decade
Behind the Scenes of 'Barbarella,' a Baffling Mess of a Movie That's Still Fun to Watch
Watch These 6 Native American Teens Tell the True Story of Thanksgiving
English