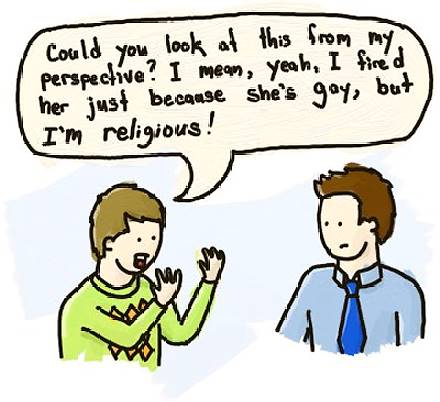 The conversation, in response to Holland, Michigan’s ordinance banning discrimination in the workplace based upon sexual orientation and gender, sparked these highlights:

“Herman Miller, which is a major employer and corporation in Holland, a furniture company, supported this so-called gay rights ordinance on the claim that it allowed them to attract the best and the brightest,” Glenn said.

“Here we go, yeah we heard that before,” Harvey added.

“What ridiculous folly to suggest that only those individuals who engage in homosexual behavior given all of its severe medical consequences constitute the best and the brightest. It’s not really bright to engage in behavior that puts you at dramatically higher risk of mental illness and substance abuse and AIDS and cancer and hepatitis, and according to various sources, premature death. So to suggest that engaging in that type of behavior defines someone as the best and brightest, which seems to be the line coming out of corporate America, is just ridiculous.”

Harvey agreed, adding that gay people are also more likely to be violent and unable to sustain long-term relationships: “You’re right. And higher rates of domestic violence and unstable relationships. I would not think of a homosexual person as a good employment risk, I just wouldn’t.”

“Gays: Mentally ill, hepatitis-ridden, HIV positive, wife-beating, cancerous employees from hell that are just going to die on you before they even complete their assignments at work.”

Kind of long for a bumper sticker, don’t you think?

Read This Heartbreaking Gay World War II Soldier's Love Letter
Secrets and Adorable Details Are Hidden in the Anime Classic 'My Neighbor Totoro'
10 Tips For Keeping Fit While Traveling
Poppers: A Quick and Dirty History of Your Favorite Inhalant
English