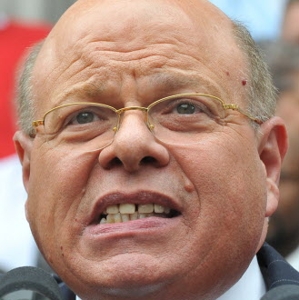 New York state Senator Carl Kruger has been arrested for accepting over $1 million in bribes over the past five years, in a sting that will see several high ranking New York politicians joining his ass in the slammer.

Kruger is no friend of the gay community, having repeatedly voted against extending marriage equality and LGBT rights, but it turns out he’s been a friend of Dorothy all along. Among the revelations outed in the sting, Kruger has been in a longtime relationship with NYC gynecologist Michael Turano. Oh heck yes!

Turano will be joining Kruger in jail, having been implicated in the laundering of said million dollars. The two apparently lived a lavish lifestyle in a Mill Basin mansion, drove Bentley, and had the audacity to be picked up from the police station in a limousine after making bail. These two can’t be put in prison fast enough, from the sounds of it.

“Kruger was closest with Michael Turano. The two men were in nearly daily contact, Kruger picked Turano up from work, and people even called Kruger’s cellphone in order to reach Turano,” Bharara noted. A source close to the investigation told The Post that Kruger — who voted against a state gay-marriage bill last year — was particularly “intimate” with Michael Turano.

Neighbors said that Kruger clearly lived in the massive Mill Basin home owned by Michael Turano, while neighbors of Kruger’s “official” residence in the Georgetown section of Brooklyn said either that they did not recognize him or that he was rarely, if ever, there. The feds, meanwhile, said Boyland accepted a no-show job that paid him $177,000 over five years from health-care provider MediSys in exchange for trying to secure millions of dollars in grants to its hospitals.

After Kruger and Turano were released without bail yesterday from Manhattan federal court, they got into a limousine.

The arrests of Kruger and Boyland for official corruption set off yet another shudder at the statehouse in Albany, where a slew of legislators have been busted for similar acts in recent years.

“Every single time we arrest a state senator or assemblyman, it should be a jarring wake-up call,” said US Attorney Bharara. “Instead, it seems that no matter how many times the alarm goes off, Albany just hits the snooze button.”

Kruger used his political power and gay shame to vote against extending equal rights to New York’s LGBT residents. Homeboy is a turncoat and a traitor to his community, and we hope he spends plenty of time in jail thinking about just how naughty he has been.

Why is it always the loudest homophobes that turn out to be the skeeviest secret gays?

The Police, Disguised as Patrons, Attacked Queer People at the Black Cat Tavern
When Did the Word 'Gay' Stop Meaning 'Happy' and Start Referring to Homosexuals?
Nearly 1.2 Million People in the United States Are Nonbinary Adults
A 1971 John Wayne Interview Reveals the On-Screen Cowboy to Be a Homophobic Racist
English