Bachmann Predicted the ‘End of Times’ in 2006 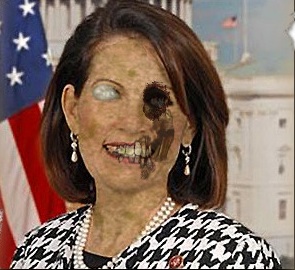 Michelle Bachmann is surging ahead in the polls, and it’s becoming clear that her increasing wackiness is directly correlated to her popularity – this is America after all!

Case in point: a new recording from 2006 has surfaced in which candidate Bachmann creepily declares that we are in “the last days” and that “the harvest is at hand.”

The recording, taken in 2006 but uploaded in 2008, was actually a prayer that Bachmann was giving to the notoriously anti-gay ministry You Can Run But You Can’t Hide run by zealot preacher Bradlee Dean.

Lord, the day is at hand. We are in the last days. You are a Jehovah God. We know that the times are in your hands. And we give them to you…The day is at hand, Lord, when your return will come nigh. Nothing is more important than bringing sheep into the fold. Than bringing new life into the kingdom…You have weeded that garden. The harvest is at hand.

The Rapture is the time when Christians believe that God is going to deliver Christians from Earth and leave non-believers behind for years of torment and hell-on-earth.

It’s not really that surprising that Bachmann has these evangelical beliefs, but it is disturbing that a potential Commander-in-Chief thinks that are days are numbered – and that the millions she would be serving as President are doomed to death soon anyway.

That’s not really a productive attitude for a head-of-state to have – she really shouldn’t be a proponent of the imminent Apocalypse while voting for defense bills, debt ceilings and health care!

Perhaps Bachmann’s severe migraines are a leading indicator that the Rapture is really at hand? Or perhaps its just another sign that this woman has some serious demons.