Back To The Future: Today’s PrEP Images Aren’t As Sexy Or Powerful As Old-School AIDS/HIV Protest Art

Written by Topher Williams on September 18, 2015
Be first to like this.

We’re proud to announce that the first article in this series has won the 2016 Excellence in HIV/AIDS Coverage Award from the National Lesbian & Gay Journalists Association!

This is the final installment of a three-part article examining how AIDS/HIV service and advocacy organizations are responding to — and perhaps shaping — the ways we visualize debates about pre-exposure prophylaxis (PrEP).  How can we imagine ourselves as part of this debate?  Or, based on what’s out there right now, do we really want to?

The first part tackles the AIDS Healthcare Foundation’s “Trust Him/Her?” billboard campaign, a controversial series of advertisements which confuse sexual responsibility with slut-shaming amidst high thread-count linens.  The second part takes PrEP Heroes (a multi-channel campaign by Housing Works aimed at demystifying PrEP usage) to the mat for crimes against both fashion and coherence.

Today, we’ll think about why the #TruvadaWhore meme might be the most radical (and problematic) image in this entire debate, while kicking it with some old-school activist images that advocated safe (but hot) sex.

Riding the PrEP Effect: Why is it so hard to imagine safer sex these days? — Part Three: How Soon Is Now?

I first saw it on Facebook, when a series of photographs began appearing on my newsfeed: men (always men!) wearing a pale blue t-shirt with the word “#TruvadaWhore” in a neutral white san-serif font.  Many of those posts outlined the reasons for taking PrEP and for being public about it. Several later reported that they had lost friends after the images began circulating.

The T-shirt was the brainchild of Adam Zeboski, created in 2013 as a subversive response to what he saw as needless slut-shaming by AIDS Healthcare Foundation President Michael Weinstein and others. The original color of the shirt reflects the color of the pill, while the hashtag and graphic simplicity encourage easily replication and dissemination.

A quick search on the Internet reveals how quickly the concept has spread and been adapted by people who use the treatment. As problematic as it is — who really wants to be seen as a shill for a pharmaceutical company? — the #TruvadaWhore meme has generated a fantastic amount of energy in a short time. 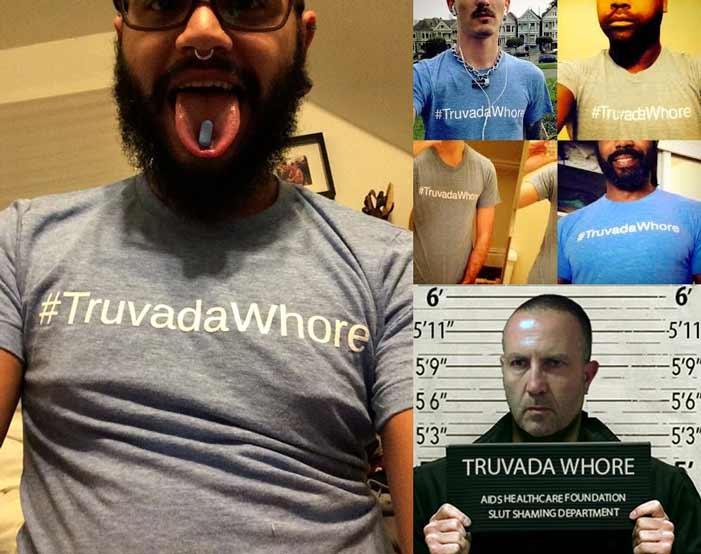 Housing Works has attempted to put that grassroots lightning in a bottle with their recent campaign.  People are invited to contribute by tweeting images of themselves using the hashtag #prepheroes.  While there have been a few photos of guys in masks holding blue pills, the campaign has yet to experience the sort of self-identification that marked the posting of #TruvadaWhore pics.

What would make an image resonate? Think about the words SILENCE = DEATH in white Gill sanserif type floating in black space below a pink triangle. Images and words like these — which were used by activist groups like ACT UP in posters, ads and artworks in early years of the AIDS crisis — have multiple purposes.

According to scholar Douglas Crimp, they should not only just suggest slogans or target opponents, but they also should define positions on an issue in order to encourage some kind of action or response from the viewer. That response can take the form of more images, more dialogue.

From this perspective, both the “Trust Him/Her?” and “PrEP Heroes” campaigns get a few things right. There is an impressive commitment to diversity within the images: many of the models are people of color. As well, the couplings in the AHF billboard campaign depict both same-sex and opposite-sex encounters. The proposed actions — get tested, know your status, take responsible precautions — appear to be common sense these days.

Yet, Crimp urges us to never forget that these sorts of images are aimed less at outsiders and the media and more at people within the community. Jason Baumann, the curator of LGBT historical materials at the New York Public Library, adds the following caveat: although it may have been created and distributed by individuals or an organization, a graphic like SILENCE=DEATH (which took six months to create) should belong most “to those who respond to its call.”

His point is that such images work best when they ask individuals to imagine themselves engaged in the hubbub of the public sphere. And, sometimes, that imagination leads to action. 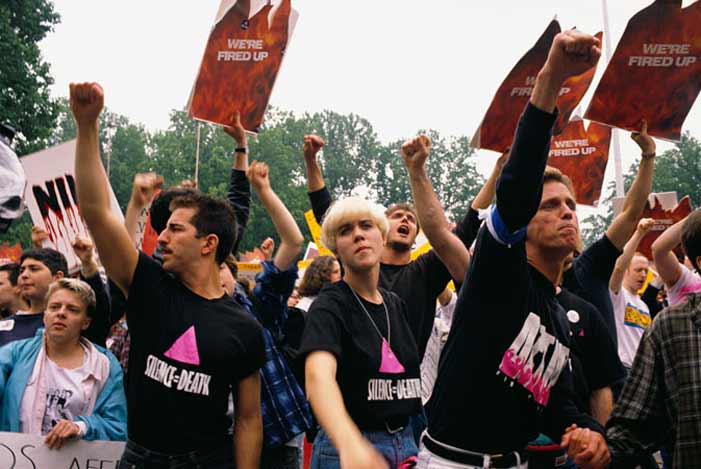 It’s not hard to see AHF’s billboards as the spiritual offspring of Kissing Doesn’t Kill: Greed and Indifference Do, a 1989 multi-channel HIV awareness campaign by the activist collective Gran Fury. Postcards which featured couples of different races and sexual orientations in the act of kissing — or just about to kiss — were mass-mailed across New York City. Those images, strung together in groups of three, soon began to appear on the sides of buses across the city.

The project caught national media attention for ways it cleverly subverted the bland-yet-utopic multiculturalism of advertisements by the United Colors of Benetton. At the time, ads by the Italian clothing manufacturer were ubiquitous. They were filled with multi-ethnic models draped in bright primary colors, presented against a stark white background.

One reporter for the Chicago Tribune suggested that their “netherworld quality” gave the viewer a sense that they were “glimpsing some fashionable heaven.” Cultural critic Henry Giroux has been more pointed in his criticism: the style of the Benetton ads transforms race into “a purely aesthetic category” that neatly ignores the history and prevalence of racism. 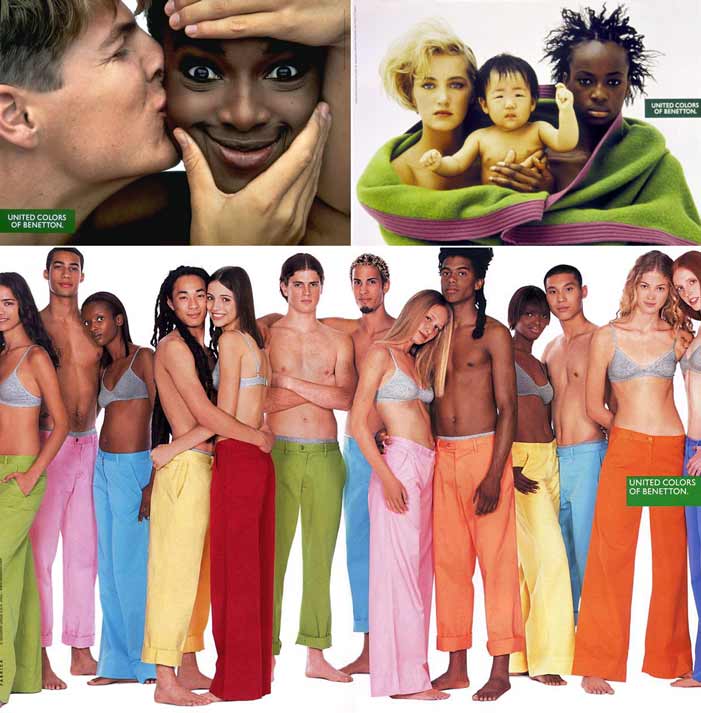 In co-opting the Bennetton ads, Kissing Doesn’t Kill transformed that fashionable multi-cultural blandness into something sexier and more dangerous (all those brown people aren’t just posing). When Gran Fury’s bus campaign was repeated in Chicago a year later, a group of Catholic priests sent a letter to the mayor demanding that he denounce the images as immoral. Several threatened to carry buckets of black paint and deface the couples themselves.

We’ve come a long way in terms of public sensitivities. No one has raised any complaints about men or women sharing a bed in the “Trust Him/Her?” ads. Yet, the eroticism of those earlier ads seems largely absent from the more recent one. It’s hard not to imagine those kissing couples from Gran Fury’s campaign waking up on the AHF billboards and thinking What the fuck did I just do?

It’s hard to picture exactly who PrEP is for. The few clues we have— These abs! Those sheets! That exposed brick! — don’t really ask us to think about treatment cost or who has access to it. Campaigns that explicitly address PrEP and Truvada haven’t yet made room for either women or female-identified bodies.

Perhaps part of the problem comes from the ways that safer sex is so often cast as a gay male concern.  Last year, the World Health Organization explicitly recommended oral PrEP as part of a comprehensive worldwide HIV prevention strategy for men who have sex with men, regardless of whether they identify as gay or not.

For Mitchell Warren, the executive director of the AIDS Vaccine Advocacy Coalition, this recognition is a double-edged sword.  “By inadvertently reinforcing perceptions that this option is just for gay men,” he warns, “the recommendation could slow efforts to deliver it to others.” Public health organizations need to conceive of PrEP as something that should be made more available to all populations who might benefit from it, regardless of gender identity, race or professed sexual orientation.

Advocacy groups need to make a compelling case, through text and image, about what safer sex should look like in 2015. Perhaps they might want to take a look back at Safe Sex is Hot Sex. Produced by the Red Hot Organization, an activist group that used pop culture to raise awareness and fight AIDS, the 1990 campaign worked hard to get viewers to think about their sexual practices while still remaining sex-positive.

The phrase “safe sex is hot sex” is plastered across each image in large red letters, while phrases like “Wear a Condom Every Time” and “You Are Not Immune” frame nude couples (and groups) of difference genders and ethnicities held in tight embraces. Shadow and twined limb mask and reveal their bodies. Thinking about your sexual choices — and acting accordingly — is as hot as it is necessary, the campaign says.

As I look at these older safer sex awareness campaigns, I am struck by the range of body types. The couples in Gran Fury’s bus ads look like people who might actually ride those buses. The hair of one woman is a little messy while her partner sports the kind of Mohawk that is just coming back in fashion. The clothing ranges from dowdy to quirky. One guy even has a cigarette (gasp) behind his ear.

Even the more toned models in the Red Hot Organization’s campaign look like people you might see at your local gym. You might even want to talk to some of these people. If you’re lucky, you might make out with one of them… but don’t tell me which one.  That’s a personal choice and some things should be hashed out between lovers.

By contrast, everyone seems so well-scrubbed and radiant in the current awareness campaigns. No hairs are out of place and everyone seems to have a gym membership. Everything is well-lit, revealing a netherworld of good-looking men and women. Who are these people? What is this world they live in? What do they want?  Do I even care?

All those irritable questions just seem like distractions from other, perhaps more important ones which have yet to be posed clearly by public awareness campaigns. Who is this treatment for? What does it mean to be on it? Who has access to it? Who can afford it? What does PrEP mean for people who cannot tolerate Truvada? How will this change the way we negotiate our personal happiness and public health?

We still crave imaginative responses to the epidemic. The current awareness campaigns somehow feel outdated in comparison to the earlier ones, recycling visual tropes that seem insufficient to the current debates about safer sex. If Be very afraid and Be very fabulous are the only options so far, then we need to demand or create a third, and fourth and fifth choice.

When we look back at the past, it should be for a reminder not just of who we were, but why we needed to have these debates in the first place. We never stopped having them, really. It would be wise for us to hold that simple truth in mind as we search for ways to insist on both personal responsibility and pleasure in this unpredictable transformative moment.

These Men Who Have Sex With Men Think Being Called Bisexual Is Too Gay
We're Loving the Push to Revive the Hanky Code for a New Queer Population
Social Media Censorship Is Costing Sex Workers and Adult Influencers Big Money
The Chinese Government Is Committed to Erasing LGBTQ People. Here Are 5 Ways It's Succeeding.
English