Last Thursday, Li Tingting and Teresa Xu got married in Beijing. Both of these people are women, and same-sex marriage is illegal in China, but that did not deter them because they are giant badasses.

The couple held a low-key wedding reception with a few dozen friends at a restaurant. They had originally planned to marry at the local government office but the police refused, telling them not to “make a scene.”

Li and Xu said they were partially inspired by the US Supreme Court’s recent decision to legalize gay marriage nationwide. Yes, like the Backstreet Boys, Starbucks and reruns of Friends, same-sex marriage might make its way to China from the United States. 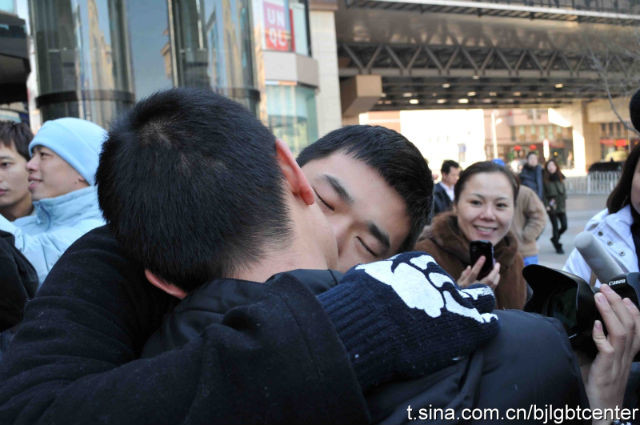 China’s social conservatives saw this coming. An editorial in the state-run Global Times written just a few days after the US Supreme Court’s decision said:

These sentiments, however awkwardly phrased, sound pretty similar to those expressed by American opponents of same-sex marriage: “it’s unnatural,” “it could weaken marriage,” “it will destroy society,” etc.

However, Chinese opposition to homosexuality is not quite the same as America’s. For one thing, China is not a largely Christian country, so we won’t likely see homophobic laws passed under the guise of religious freedom in the Middle Kingdom.

Instead, China’s opposition to same-sex marriage is rooted in Confucianism and social attitudes regarding the importance of family. While Western culture leans toward individualism, Chinese culture heavily stresses the importance of family harmony. Family is everything in China. A person’s family name goes before a person’s given name or even titles.

Chinese culture also emphasizes a concept known as filial piety (孝, xiào). Westerners honor their parents, yes, but not to the extent that Chinese people do. Chinese people, even as adults, are aghast at the idea of disobeying or contradicting their parents. Chinese adults are obligated by law to visit their elderly parents. Chinese adults support their elderly parents (or even their grandparents) financially. Old people often move in with their children, especially their sons. The idea of sending a grandparent to a nursing home is shocking.

In addition to financial duties, Chinese adults are also obligated to marry and have a child. And the One-Child Policy means that if your son or daughter is gay, then you will not have any grandchildren (unless your lesbian daughter marries someone else’s gay son in a fake marriage).

The idea is horrifying, not only because it violates filial piety, but because it deprives an elderly Chinese person of potential financial support from descendants. China doesn’t have much of a social safety net, so any old person without money or children is in trouble. For that reason, the Chinese Communist Party (aka the CCP, the ruling party within the country) stresses the value of family, while parents put enormous pressure on their children to get married, particularly to someone rich.

Legalizing same-sex marriage would entail massive changes in China’s culture and even the CCP’s policies regarding social welfare and the One-Child Policy — no wonder social conservatives are afraid.

But Li Tingting is fearless, even though she has gotten into trouble with the government before. Last March, she and four other women’s rights activists were imprisoned for planning a protest against sexual harassment. The women were held for a month, during which time they were subjected to harsh interrogations and medical neglect.

Being imprisoned would instill a sense of fear into most of us, but not Li Tingting because she’s a badass and she’s better than you (unless you are Li Tingting and if you’re reading this CONGRATULATIONS! YOU LOOK AMAZING IN THOSE WEDDING PHOTOS! I CRIED SO HARD).

In fact, Li’s imprisonment is what pushed her to get married. Her jailers refused to let her partner visit her in prison because Xu was not a family member, a lawyer, or a spouse.

Li told CNN, “I hope by doing this, we’re married no matter whether it’s legal or not. We’re married women now!”

Hey, Young Boys Can Like Disney Princesses, Too, as This Brazilian Illustrator’s Work Depicts
Drag Queens Weren't the Butt of the Joke in This 2007 'King of the Hill' Episode
As an HIV-Positive Man, These Are the 5 Questions I'm Asked Most Often About Dating
Buggery, Sodomy and Cross-Dressing, Oh My: A Timeline of Gay Criminalization in America
English