Bastard Bonds is the Gayest RPG You’ve Never Heard of

Written by Daniel Villarreal on October 1, 2016
Be first to like this. 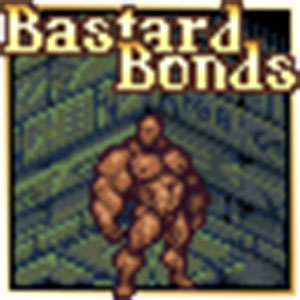 Unicorn Booty is a proud media sponsor of GX4 (aka GaymerX). For our complete GaymerX coverage, click here.

Video game developer Geremy Walker is best known as Captain GerBear, an artist who specializes in muscular male pin-ups, but he recently released Bastard Bonds a violent role-playing game (RPG) that’s one of the gayest on the market.

Other recent long-play video games have integrated gay content into them — Dragon Age, Mass Effect 3 and Fable 3 for example — but they usually feature homosexuality in a series of short-lived sexual cut-scenes where you can hook-up with a lusty elf or space ranger. In Bastard Bonds, you spend the game surrounded by muscular, skimpily dressed adventurers who are flirtatious and sometimes naked, albeit in a highly pixelated and non-explicit style.

After being convicted of a crime you didn’t commit, you find yourself amid the countless convicts of Lukatt island. To survive and escape the island’s violent mysteries, you’ll have to form “bastard bonds” with a band of muscular adventurers willing fight and flee on your behalf — each of their special skills depend on the crimes they’ve been convicted for. You can choose to be a male or female character: choose a female and she can choose to be heterosexual, if you choose a male, he can be gay.

Although many of the game’s male characters flirt with you, the game doesn’t force sexual relationships; rather it just illustrates male characters the same way that RPGs have long illustrated female ones: there’s even a leatherclad werewolf and a lusty titan you can entice. 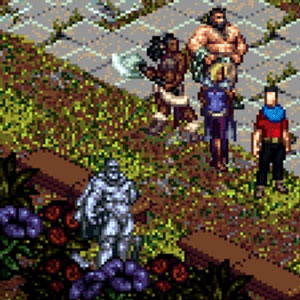 Inhabitants of this island are no strangers to sex, and if you’re lucky (or unlucky), you might stumble into one of the game’s hidden sex scenes. While nothing explicit is shown or described in this game, the sound effects and the situations your character is placed in might be lewd enough for you to get your rocks off, and there’s something out there for everyone.

The game itself is more interested in fighting rather than frugging, but the fact that it was created by a gay artist and features a bevy of hunky, scantily clad men (a few illustrated in sexy pin-up style) shows that there’s more than a passing interest where gay identity is a constant part of the action rather than a hot flash hidden deep within.