Betsy DeVos is Dangerous for LGBTQ Kids—Here’s Why (Video)

School’s hard enough as it is. Now imagine that on top of all of the usual social and academic challenges, the person running the place is out to get you.

It’s an all-too-familiar scenario for LGBTQ kids, whose access to education is frequently challenged by hostile students, hostile teachers and hostile administrators. Now, with Betsy DeVos confirmed by the Senate, we have a hostile person running the Department of Education.

The Alarming Background of Betsy DeVos

Who is Betsy DeVos? She’s a billionaire lobbyist whose fortune comes from a car-parts company and one of those multi-level marketing schemes. She’s spent most of her career fundraising for Republicans and pushing for laws that force taxpayers to fund private schools.

And she’s been extremely successful, learning early on that money is the best way to manipulate her Republican cronies.

“My family is the largest single contributor of soft money to the national Republican Party,” she once said. “We are buying influence. … We do expect something in return.”

She definitely got something big in return when Donald Trump nominated her to run the Department of Education, even though she has literally zero first-hand experience with public schools. (Her family goes to private schools—you know, the kind she’s trying to make everyone in America pay for).

Her hostility to queer people is unmistakable, with her family foundation donating somewhere around $200 million to groups that fight to restrict LGBTQ equality. The National Organization for Marriage and Focus on the Family have been beneficiaries of her family’s largesse, and she also gave money specifically to block marriage equality on the ballot in Michigan. “We support marriage between one man and one woman because that is the way God set it up,” she said. This is the person now in charge of the nation’s schools.

The reason it’s so scary that she’s in charge of the Department of Education is simple: She could dismantle or weaken the Office of Civil Rights. That’s the special branch set up to make sure everyone has access to school, and under the Obama administration it made certain that included LGBTQ students.

But it’s highly unlikely that someone dedicated to, as she puts it, using education to “advance God’s kingdom” is going to be concerned about protecting queer kids.

In fact, her cronies in Michigan came very close to passing a bill that attacks LGBTQs. Senate Bill 137 passed with exclusively Republican votes, backed by the very lawmakers she helped install in office. The law, if it had been signed, would have given students explicit permission to harass each other if they said they were basing their bullying on a religious belief or moral conviction.

That’s just one of the completely bananas changes that could be coming to the DOE under Betsy’s leadership. Of course, there are also huge concerns about trans access to facilities—Donald Trump’s Attorney General Jeff Sessions is already moving to block trans students from using bathrooms at school. And there’s a possibility she could revoke funding from institutions with nondiscrimination policies, or require that students be taught that being gay is a mental illness.

There’s no telling how bad the nation’s schools will get under Betsy DeVos. The only thing that seems certain is that they’ll be very, very bad for LGBTQ students. 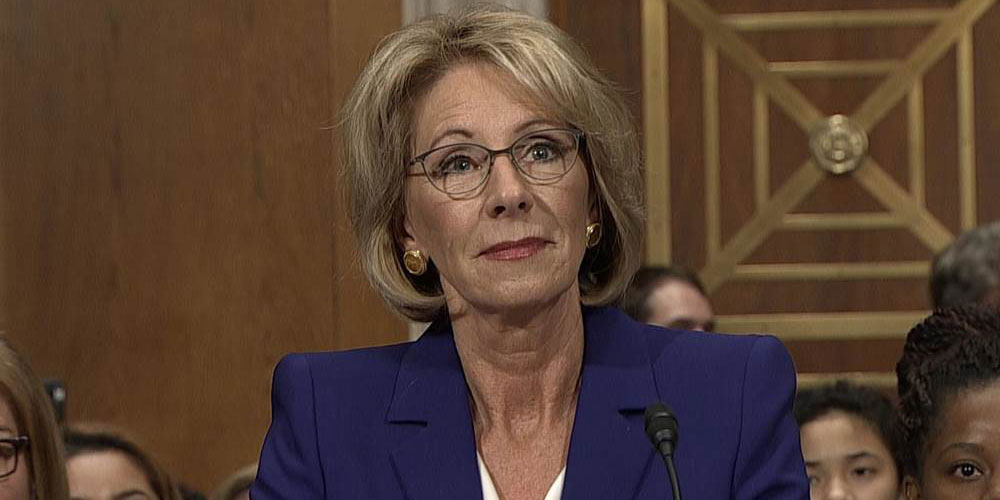