Black, Gay, And Unapologetic In The Deep South: Why You Should Watch ‘The Prancing Elites Project’

The Prancing Elites Project — a new reality series about an all-gay, five-person, African-American dance troupe from Mobile, Alabama striving to dance their way out of Redneckistan into the mainstream —premiered last night on Oxygen. It’s also your new favorite show. 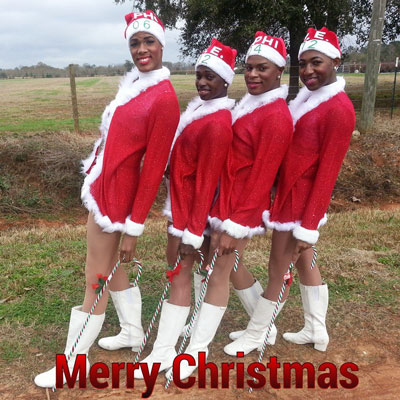 Discovered by the media when they danced in a local Christmas parade dressed as sexy Santas — a move that caused a bit of controversy among people who are fond of using the word “family” like a weapon, as in “We don’t want families seeing this sort of thing.” — The Prancing Elites have since acquired an agent, this TV gig, and a readymade Lovable Underdog status.

The first episode (which you can see in its entirety here) sees them barred from dancing in another regional Christmas parade and pelted with verbal abuse from “families” who insult their gender presentation and sexual orientation. An offscreen voice yells, “Y’all go home.” One problem with that: they’re already home.

In typical reality show form, the dancers are introduced and given shorthand identities for easy, reductive typing. Kentrell is the boss; Adrian is “the blonde;” Tim is “the lady” and more or less identifies as female (though the word “transgender” has yet to surface); Jerel is “bitchy;” and Kareem is “the guy” because he likes to play sports. All five of them are more than camera-ready; they’re camera hungry, minus the desperation seen in most reality show participants.

Also fairly typical for reality debuts, the show features some staged moments of scripted shenanigans that highlight the team’s rural background — bafflement over the various cheeses offered in a high-end burger joint, for example — and a guest star visit from Nene Leakes, whose job is to say “Dream big!” before hopping on the first plane out.

But any TV series that puts a queer person of color front and center in the action is worth noting — Fuse’s Big Freedia: Queen of Bounce is another — and worth giving a shot. The Prancing Elites Project serves up five and, if it remains true to itself and its participants, it could earn the distinction of being one of the rare reality shows that doesn’t involve the celebration of tacky luxury, aspirational McMansions, and non-stop, pre-arranged fighting among casts of alleged friends. This crew is organic and that’s rare.

Meanwhile, the payoff for the young cast is a chance to be a conduit of hope for other young outsiders in far-flung regions of the U.S.  To that end, the show reveals — at least in this episode — a few refreshingly, genuine moments of decency as lone individuals from conservative, anti-gay, Alabama, approaching the Elites with messages of support and admiration. There’s no doubt who’s going to win the war in this narrative.

Now watch this crew turn it out:

Tumblr Claimed to Be One of the Web's Queerest Places ... Then Got Told Off by Actual Queer People
The AIDS Memorial on Instagram Ensures That Stories of Love and Loss Are Never Forgotten
Homosexuality Was 'Cured' 47 Years Ago This Month
English