No, Blackface Is Still Not OK, as This White Gay Artist Reminded Us All on Instagram

Written by Matt Keeley on November 2, 2017
Be first to like this.

Somehow, in 2017, not everyone’s gotten the memo that blackface isn’t acceptable. The latest offender is gay artist and Instagrammer Zachary Crane. He decided to dress up as a genderbent version of his favorite X-Man for Halloween this year. What was Crane’s costume? A blackface Storm. Sheesh. 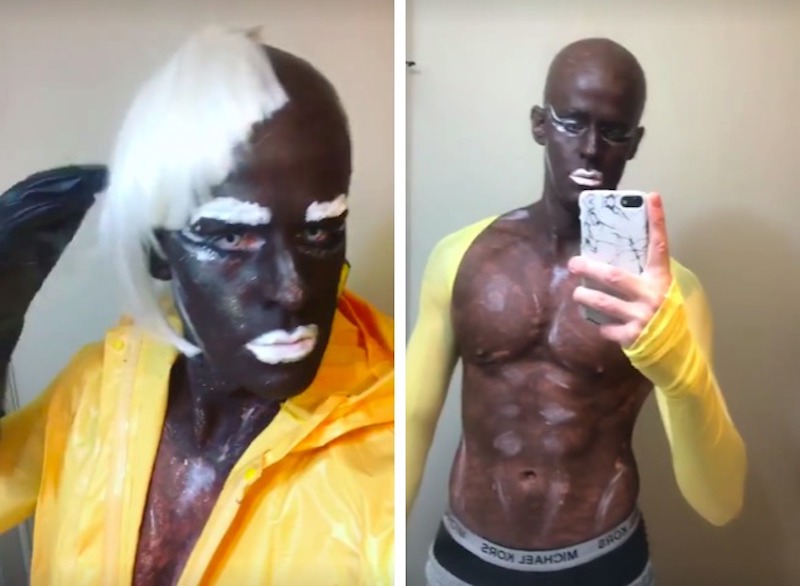 In a development that will shock and surprise no one, Crane’s one of those rare beasts — a gay Trump supporter. Crane has posted a number of photos wearing Trump gear and posing at Trump Tower.

A number of comments went up on his (now-deleted) blackface Storm photos calling him a racist idiot. He replied in a likewise now-deleted post, saying “I’m fully aware that everyone is crying over my costume and calling me a racist piece of shit.… like seriously. Just to let everyone know, I love Storm. Have ever since I was a kid.”

RELATED | 5 Costume Ideas You Should Most Definitely Avoid This Halloween

Look, we get it. Storm’s cool. Who doesn’t like Storm? But generally, a good rule of thumb: No matter who you’re portraying, if they’re black, don’t use blackface. It’s not hard, people. Dressing up like them is enough. And, of course, no one would’ve complained had Crane just wore the yellow outfit and the white wig — and everyone would’ve understood who he was.

Crane also fancies himself an artist. You can judge his talent for yourself:

Drinking Beer Can Be Healthy: A Dietician, a Counselor and Two Brewers Tell Us Why
L.A. Trio Gypsum Just Dropped a Majestic, Elemental Debut Album
Drink Up! Here's When the Bars Close in Various Cities Around the World
This Artist Has Redrawn Snow White's Seven Dwarfs as Drool-Worthy Pin-Ups
English