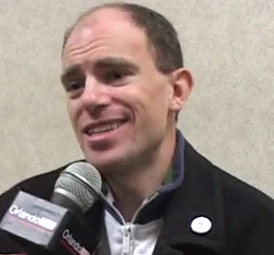 Mad props to Brian Feldman and Hannah Miller, the complete strangers who got hitched in a Florida courthouse as commentary on the fact that gays and lesbians in committed life-long relationships remain unable to wed in 45 states in our illustrious nation.

Hannah was selected from a group of three women who answered an ad from Feldman stating he would marry whoever showed up the next day. To choose between the three brides, a game of spin-the-bottle was used, as is the tradition when marrying a stranger.

Feldman fills us in on the details:

“In a conversation one night with a friend, I expressed my frustration about the inequality of rights for same-sex couples who care just as much about each other as heterosexual couples,” Feldman said. “It occurred to me that complete strangers could marry, as long as they were heterosexual, but a same-sex couple could not. I decided to do something about that through the ultimate performance art project — marrying a stranger.”

“It’s ridiculous and offensive to me that they have to live their lives denied basic rights,” Miller said.

“Some people were stunned, others thought it was courageous and there were the few who were disinterested,” Feldman said. “Overwhelmingly, the feedback for the marriage project has been positive.”

Cool! I think…? After a year of marriage, Feldman and Miller had their marriage annulled to further illustrate the inequality LGBT’s face. Straight men and women can hop into marriages and dissolve them at will, making it so they legally never even existed in the first place. For some reason beyond us, annulments aren’t a threat to the sanctity of marriage, but two women in love are.

Both former bride and groom continue their work advancing rights for LGBT Americans. Miller is currently in the midst of producing a lesbian puppet show. Color us intrigued. We’re so proud to have you guys working for the team! Thanks!

The 'Golden Girls' Themed Cruise Is Back for Diehard Fans in 2023
Tumblr Claimed to Be One of the Web's Queerest Places ... Then Got Told Off by Actual Queer People
Ever Wondered How American Nudist Resorts Deal With Erections?
Edgar Wright’s ‘Last Night in Soho’ Is a Fun, Phantasmagorical Fever Dream
English