Britney Spears And Eminem Are Basically The Same Person 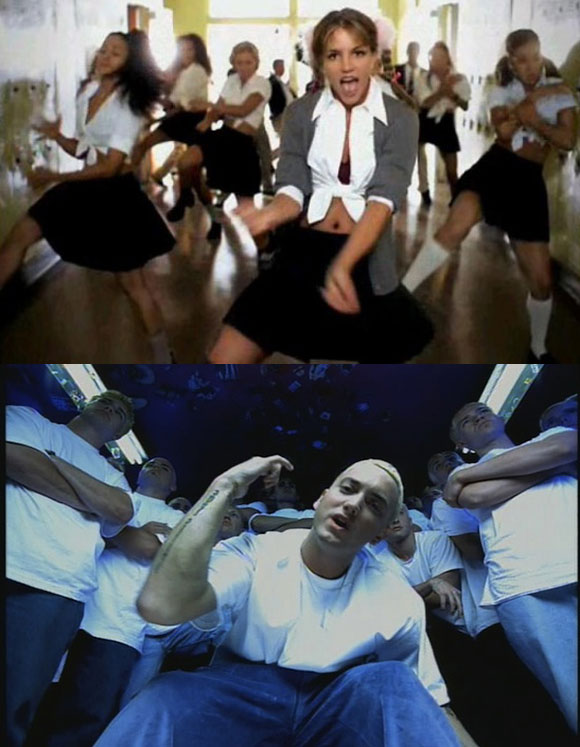 A lot has been written about both Britney Spears and Eminem. And they are often compared to other artists, both in terms of their influences (Madonna, in Britney’s case; the Beastie Boys, in Eminem’s) and in terms of their peers (Christina Aguilera and Lady Gaga, for Britney; Jay-Z and Kanye West, for Eminem). However, nobody ever talks about just how similar Britney Spears and Eminem are.

For starters, both artists became mega-successful at the end of the 90s: Britney released her … Baby One More Time album in January 1999, while Eminem rose to prominence when his second album, The Slim Shady LP, was released a few weeks later, in February. And while these albums have since been heralded as ’90s classics, both artists were initially seen as novelty acts whose time in the public eye would be short.

However, both Britney and Eminem became TRL stars, using the power of music video to instantly marry iconic imagery with their songs: you can’t listen to …Baby One More Time without thinking of Britney’s school girl uniform, or The Real Slim Shady without Eminem’s blonde dye-job. 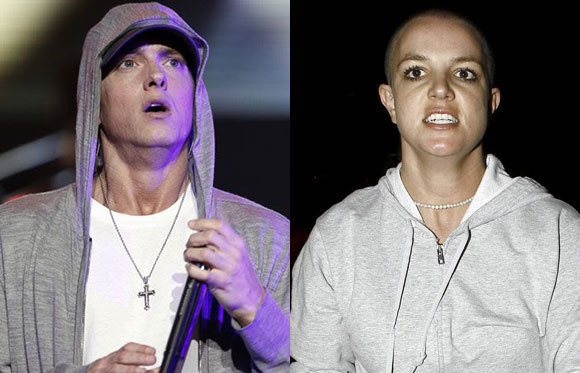 As a result of their celebrity, Britney and Eminem were both in the tabloids for the much of the first half of the ’00s. Eminem had many public feuds, including with his mother, as well as having to fend off allegations of misogyny, homophobia, and even racism; Britney, meanwhile, dealt with allegations of a boob job and cheating on Justin Timberlake.

And then both artists went away. For both artists, it seemed as if they would never return to the top of the charts: Britney spiraled out of control and ended up in a psych ward, while Eminem fell into a depression after the murder of his friend, Proof.

But like the legends they are, both Britney and Eminem came back towards the end of the decade with new albums. Neither album — Britney’s Blackout and Eminem’s Relapse — was seen as a true return to form, but both albums did exactly what they needed to: reintroduce the world to artists we had loved in the past.

Britney and Eminem have since both released more albums that have been met with better critical reception while expanding their brand. And perhaps surprisingly, both artists have had more success now than before their respective hiatuses. Even their chart statistics are bizarrely similar in this regard: Britney and Eminem both had one number one song in the first half of their careers, and both artists have since picked up four more number one songs since returning. Rihanna has been a common link for Britney and Eminem as Britney sang on a remix of Rihanna’s S&M in 2009, while Rihanna famously lent her vocals to Eminem’s Love the Way You Lie in 2010 and The Monster in 2013.

So what does all this mean? For one thing, it shows that both of these artists are legends in their respective fields. They have both managed to ride their initial wave of success into long-term careers in ways that their contemporaries could not. A lot has been made about Britney’s lack of genuine talent or Eminem’s “shock value” lyrics, but you cannot fool the public for 15 years without some kind of genuine substance to back it up.

There’s also a resilience to both artists that makes us respect them, even if we don’t especially like their music. There’s a really sick American pastime of building someone up, just to tear them down, just to see them get back up again. Both Britney and Eminem have had very public, personal struggles, but they have both overcome them to once again be huge hit-makers.

It also means that there are a lot more similarities in popular music than you’d expect. If you listen to a Britney song and an Eminem song, you would think that these two artists had nothing in common. But by looking beyond just the music, you can see that they have had a bizarrely similar career. And that’s the thing about music: it’s never JUST about the music. It’s about the album artwork and the chart positions and the tour and their evolving look and the magazine interviews and the whole celebrity that surrounds them.

And it’s in those things that you can take a teen-pop princess from Louisiana and an angry white rapper from Detroit, and mesmerize the entire world. Britney and Eminem will never collaborate on a song together, but they don’t have to, because even separately, even though their individual music may sound worlds apart, they’re still similar creatures, behaving life one another in entertainment’s vast and strange world.

Matt Craven is a freelance music writer in Seattle. Check out his Tumblr.

Juanita More, Legendary SF Activist, on the Legacy and Significance of Pride
A List of 25 People, Products and Companies American Conservatives Have Tried to 'Cancel'
10 Songs That Shouldn't Be Played at a Gay Wedding (Seriously, Just Don't)
Hey, Young Boys Can Like Disney Princesses, Too, as This Brazilian Illustrator’s Work Depicts
English