I know what you’re thinking: If there’s one thing this world needs more of, it’s hard alcohol marketed to bro culture. Well, guess what? You’re in luck. Say hello to BALLS Vodka! 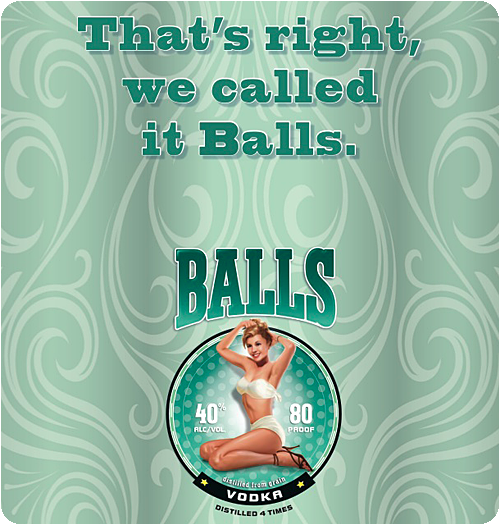 With appearances in liquor stores popping up all over New York and Connecticut, this kitschy novelty booze act seems to have all the right elements to create a craze that could sweep up every woo-girl in the nation in a good old vodka tsunami, right?

Because we’re still at the age where saying the word “balls” is funny enough to warrant an entire brand.

Okay, so perhaps they’re plagued with a terrible confusion about, you know, what makes a pun a pun, and… I don’t know… maybe they just really like balls! I mean, who doesn’t? What’s wrong with that?

Oh shit. What’s that say right down there?

Okay. Hold on. Let’s break this down before we jump to conclusions…

First off: Since when do straight people even use the term Mary? Wait! Maybe that’s it! Maybe they don’t know what it means! I mean, they couldn’t have an official tagline using “Mary” meaning, you know…

Let’s check in with Dictionary.com and see what it says there, you know, for “slang”:

Huh. Well….. Ummm… Maybe they’re gay?!? I mean, despite a total lack of aesthetic taste, sense of humor, or a single shred of evidence suggesting they market themselves to gay people… You never know! What if they’re just like the Log Cabin Republicans of Vodka?

Here. Let’s check out their video and see:

Every Mary here will be just fine without your “BALLS”.

Good luck with that.