Campaign Calls For Beyoncé To Become An LGBT Rights Superhero

Written by Terri Washington on August 8, 2015
Be first to like this.
Calling Queen Bey! In Houston, anti-equality super-villains have conspired to overturn the Houston Equal Rights Ordinance (HERO), a law which protects Houstonians from employment, housing, and public accommodation discrimination based on sexual orientation, gender identity and a slew of other federally-protected traits. Beyoncé could use her superheroic influence to help make sure that HERO stays on the law books… but will she??!
Houston’s openly lesbian mayor Anisse Parker introduced the legislation in April 2014, but since then, HERO has been beset by opposition. Opponents of HERO protested the ordinance on the grounds that (as usual) LGBT people would use their newfound protections to rape and molest women and kids. We should note that the ordinance does not allow transgender people to use the restrooms or locker rooms of their choosing, nor does it require churches or religious organizations to abide — both of which are usual sticking points for LGBT opponents of such laws. The Texas Supreme Court granted victory to the queer-phobes this July by ruling that the Houston City Council must either repeal the ordinance or put it on the ballot in the November elections. Texas is widely known as a conservative state and if the ordinance is repealed, Houstonians will lack the additional layer of protection that HERO would have offered on top of federal laws already prohibiting such discrimination.

Carlos Maza, the LGBT program director at Media Matters, pointed out that Beyoncé’s influence could help ensure that voters support HERO at the ballot box. She already supports LGBT rights after all. Soon after the historic Supreme Court decision upholding nationwide marriage equality, Beyoncé posted a video to Instagram with her, decked out in various rainbow attire, and the caption “Never Too Late #LoveWins”

She also showed her support for legalizing same-sex marriage in 2013 through a famous Facebook post featuring a note reading, “If you like it you should be able to put a ring on it.” 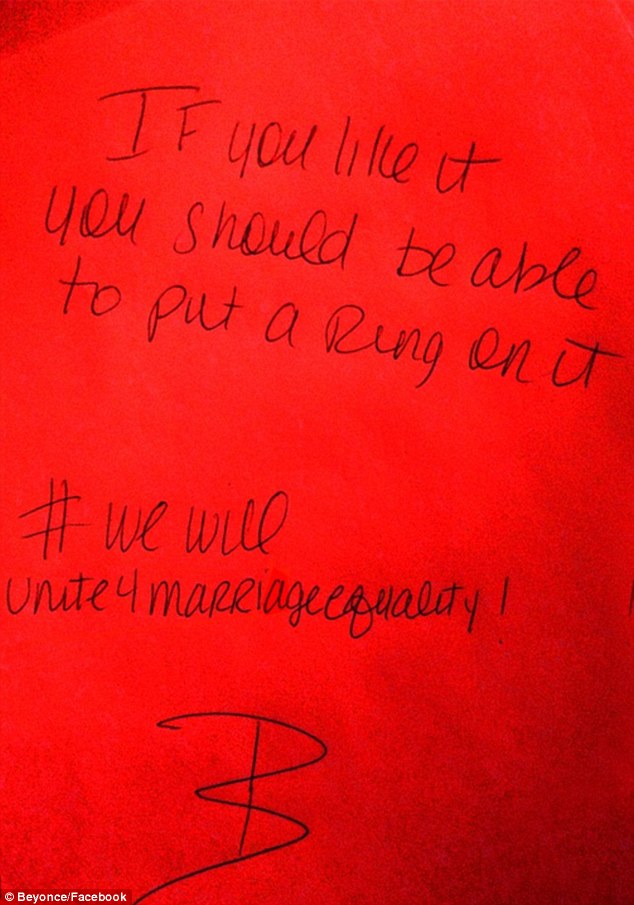 Beyoncé is known for lending a helping hand to other human rights causes as well. In April she used her Instagram to draw attention to the death of Freddie Gray and she paid the bail of Ferguson’s #BlackLivesMatter protestors in May.
Thus, Maza has urged Twitter users to call on Beyoncé with the hashtag #BeyBeAHERO to compel Beyoncé to tell her fellow Houstonians to do the right thing and vote the ordinance into law.

Twitter is using the hashtag #BeyBeAHero to fight for #LGBT equality in Houston http://t.co/xelJ9lJ7pt via @IDsMic pic.twitter.com/XBWoJbF9vV — GLAAD (@glaad) August 5, 2015

Beyoncé has over 14 million followers on Twitter, an platform she hasn’t used in two years, and 42 million followers on Instagram. She is arguably the biggest celebrity in the world — even Obama’s Twitter account has just over 3 million followers. If Beyoncé chooses to use her influence to stop discrimination in her hometown, the Beyhive will definitely follow suit. Her last five Instagram posts have averaged 1 million likes a piece and her last five Twitter posts have been retweeted a total of 87 thousand times. Beyoncé has the power and influence to make history and sway voters to end LGBT discrimination in Houston — but then again, making history and changing the world could be just another in the life of Beyoncé.
(featured image via @beyonce )
Beyonce Black Lives Matter discrimination Freddie Gray Houston Jay-Z women

This Researcher Is Giving a Voice to Gay Iranian Men Through a New Book
5 Super Queer Gifts Perfect for the LGBTQ Friends and Family on Your Holiday Shopping List
For Men Who Have Had ‘The Snip,’ Fake Foreskin Is Officially a Thing
New Gang of Four Tribute Album 'The Problem of Leisure' Honors Punk's Greatest Guitarist
English