Charlie Hebdo’s Latest Threats Are Coming From Inside The House

Charlie Hebdo, the French satirical newspaper is in trouble again. This time, it’s not a terrorist attack like in January, but internal issues stemming at least partially from the influx of money sent to support the paper and make sure it continued after four cartoonists and the editor/publisher were murdered in the January attack. 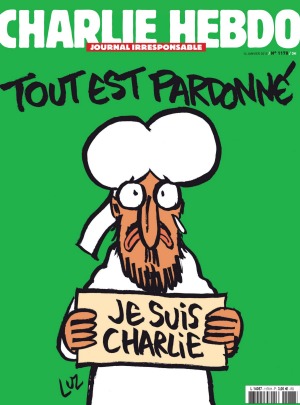 The biggest blow is the departure of Charlie‘s frequent cover artist Luz. Luz (real name Renald Luzier) has drawn many famous covers from the weekly, including the cover of the first issue published after the attacks (at right).

In an French-language interview with Libération, Luz says that as the only surviving cartoonist involved in the attack, “Each issue is torture because the others are gone. Spending sleepless nights summoning the dead, wondering what Charb, Cabu, Honoré, Tignous would have done is exhausting.”

Luz isn’t the only Charlie staffer suffering. The Comic Book Legal Defense Fund reports that all the staff members continue to be under 24-hour police protection, and that many people have said they find it difficult to concentrate on their work, let alone sleep.

Despite the post-traumatic stress disorder, morale is low for other reasons. France recently passed a surveillance bill (much like the USA’s PATRIOT Act) in the wake of the attack – something Charlie Hebdo vocally opposed.

Some of the issues are much more localized to the Charlie offices. Three-quarters of the staff members contributed to a guest editorial in French newspaper Le Monde, calling for Charlie to become a cooperative owned by the staff in equal parts. Currently, 40 percent of the magazine is owned by the parents of the deceased editor/publisher Charb (real name Stéphane Charbonnier, killed in the attack), 40 percent by the new publisher, cartoonist Riss (real name Laurent Sourisseau) and 20 percent by CFO Eric Portheault.

One of the contributors to the editorial, Zineb El Rhazoui — a staff writer and French/Moroccan journalist — was publicly called out for “incidents” prompting Charlie‘s owners to “remind her of her minimum obligations toward her employer.”  She later said: “My husband lost his job because jihadists unveiled his workplace, he had to leave Morocco, I have been threatened, I live in friends’ guest rooms or hotels and management plans to fire me…Bravo Charlie,” though Riss claims that she will not likely be fired.

Even though terrorism couldn’t kill Charlie, they need to be aware that a combination of new ownership and PTSD could do what the terrorists couldn’t. Putting out a newspaper like Charlie Hebdo is stressful anyway – when you add on all these new pressures, it’s amazing the paper comes out every week at all. Whether the paper stays afloat or implodes, here’s hoping that the surviving staff members are at least able to find peace of mind.

Drink Up! Here's When the Bars Close in Various Cities Around the World
7 Gay Manga Titles We'd Love to See Get an Anime Adaptation
New Orville Peck Album 'Bronco' Seals the Deal: He's a First-Rate Country Artist
Here's What 15 Celebrities Have Said in Support of Open Relationships and Non-Monogamy
English