We couldn’t help but LOL when Charlie Sheen insisted in his most recent interview that he is not bi-polar, but bi-winning. “I win here and I win there, now what?” 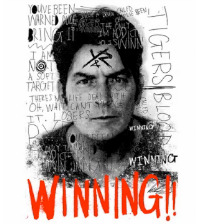 It’s hard not to watch these interviews.  This man is seriously out there, talking about “banging seven gram rocks and finishing them,” and “taking more [drugs] than anyone could survive.”

And how is it that this man is still alive? “Because I’m me. I’m different. I just have a different consitution. I have a different brain, a different heart…I got tiger blood, man. The run I was on made Sinatra, Jagger, Richards, all of ’em, just look like droopy eyed, armless children.”

So no more from us – this it! Why? Because us unicorns, we’re just different, man.

And if you love “Barbara Streisand,” you will dig this Sheen remix: