Check, Please: 10 Famous Movie Dates You Don’t Want To Be On

You’ve never been on dates this bad. Okay, maybe you have. But unless you’re also a successful screenwriter, those bad dates didn’t end up acted out on the big screen. Count your blessings that you weren’t in on these. (Note to reader: Spoilers will be delivered. All of them.)

Does it count as a date if it’s really casual and lasts all night and one person commits suicide? Sure it does! In Martin Scorsese’s black comedy, Griffin Dunne goes to Rosanna Arquette’s apartment to visit her, finds art photography that suggests she might be disfigured under her clothes, then abandons his romantic plans because that’s how sexually shallow men really are.

Her subsequent suicide is only the beginning of his night-long trip into weirdness, one that results in his being encased in plaster. He kind of deserves it.

Who has time to waste? Not you. Lay your cards on the table first thing. See how it goes. “I want a baby now. I’m 37,” says Tina Fey in the opening moments of this surrogacy comedy co-starring Amy Poehler. Her unnamed first date excuses himself from the table and never returns. Finally, she can eat that meal in peace and go have a baby with Poehler. Win-win.

This scene doesn’t technically count as a date. It’s more of a pre-game in which Martin Lawrence and Will Smith terrorize the 15-year-old boy who comes to pick up Lawrence’s daughter for what seems to be an innocent first time out.

The men use abusive, profane language and wave a gun in the kid’s face because apparently it’s funny to be cruel to kids. The boy, for his part, remains stoic and unmoved, which means he’s got bigger balls than either of them. You’ll find yourself rooting for the teen couple to lose their mutual virginity, if only to spite the middle-aged “bad boys.”

(NOTE: The clip above is not a date scene. It’s merely every swear word from the movie shouted out loudly. You’re welcome?)

Professional non-sequitur Tom Green finds a lovely young woman (Marisa Coughlin) to go on a date with him. Her hobbies involve oral sex and having her legs caned hard with a stick, which Green obliges. Green takes her to a restaurant and goes berserk. staging a fake phone call where he screams about money (“You’re fucking fired, Bob!”). Then he tears into his dinner like a wild animal. Green’s father (Rip Torn), eating at the same restaurant, approaches the table to tell him to knock it off, only to have his son tell Coughlan that his father’s name is “Little Timmy.”

There is no rational explanation for this scene or any other scene in this film, for that matter. It’s a piece of bizarro cinema that one must live in order to understand. And even then you will not.

Jim Carrey and Matthew Broderick go on a man-date to Medieval Times. Ever been to one of those? No? Dude, THERE IS FALCONING AND JOUSTING. Stop reading this article and go to a Medieval Times right now. Anyway, while eating chicken on their date they dare ask “serving wench” Janeane Garofalo for silverware, to which she responds, “There were no utensils in medieval times, hence there are no utensils at Medieval Times. Would you like a refill on that Pepsi?” The evening ends in a duel and builds the foundation for Carrey’s slow-burn obsession with Broderick, as all good same-sex romances do. 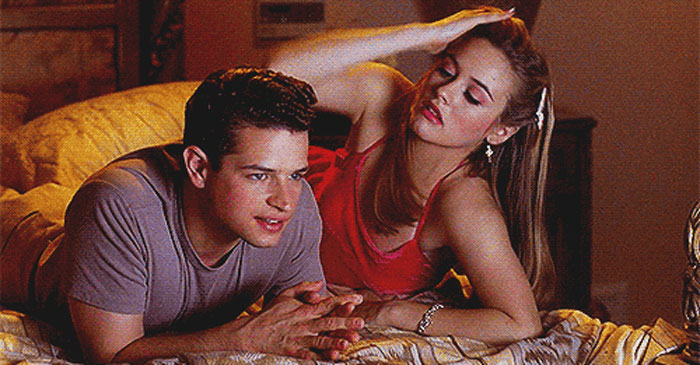 Poor Alicia Silverstone. All dressed up on a date with a gay boy and she doesn’t even know it, her best moves lost on the oblivious Christian (Justin Walker, who sort of disappeared after this one). Perhaps his film selections of Some Like It Hot and Spartacus should’ve been a clue. Whatever, she winds up with her hot, ex-stepbrother Paul Rudd anyway.

The Katharine Hepburn Film 'Stage Door' Was Surprisingly Queer for 1937
Kick Off 2022 With Some of Our Favorite LGBTQ Podcasts
Let's Play a Game Called 'Communist Propaganda Posters or Gay Couple's Vacation Pics?'
6 Sexy Gay Video Games Designed to Get You All Hot and Bothered
English