China’s stock market is in free fall right now, and has in fact been falling for about a month. Obviously, this is an important story: China is one of the USA’s biggest trading partners and the second largest economy in the world. However, American news outlets haven’t been covering it much, probably because economics is boring and confusing. So, because numbers are dull and because Americans can’t talk about China without mentioning pandas, dragons, kung-fu, or General Tso’s Chicken, here are some videos of those adorable black and white bears you love so much falling down, just like the stock market.

So! Chinese stock markets are doing badly. How badly? CNN reports that the Shanghai Composite has lost 32 percent since June 12. The Shenzhen market is down 41 percent.

It was especially bad on what some are now calling “Black Wednesday” with the Shanghai Composite falling 8 percent, and Shenzhen Composite 2.5 percent. As a result, about 1,400 companies filed for a trading halt to prevent even more losses.

According to the Bespoke Investment Group, China’s stock market has lost $3.25 trillion over the past month.

To make a long story short, China’s stock market has fallen very far. Like this adorable panda, only with terrifying long-term implications for investors and the rest of the world’s markets:

China’s government is scrambling to fix the damage and save its collapsing market. Beijing has responded to Black Wednesday by ordering state-owned enterprises not to sell shares of their listed companies in order to prevent further losses. It has also frozen new share offers and set up a market-stabilisation fund, to no avail.  It has even taken to begging ordinary Chinese civilians to support the stock market by buying and holding onto stocks instead of selling in a panic. 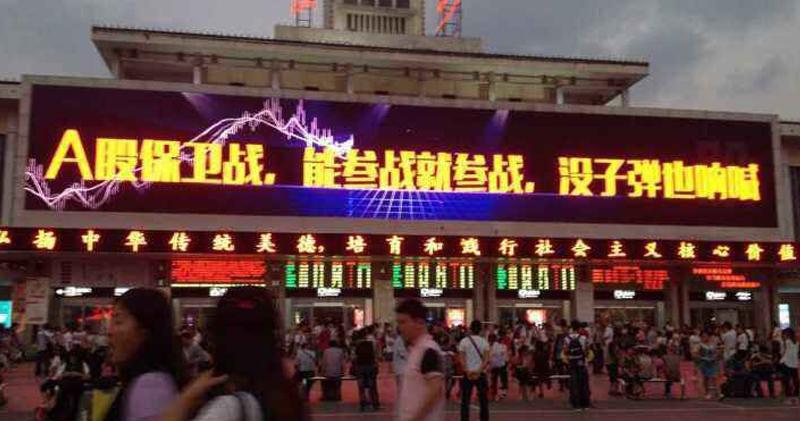 At Changsha station, “It’s a war to defend A-shares. Join the battle if have money. Or cheer those that fight”

Alas, The Economist suggests that the government’s interference reeked of desperation, thus driving shareholders into even more of a panic. Beijing does not have a terrific track record with preventing mass panic. Corralling the emotions of over a billion people is more than a little difficult. Plus, ordinary Chinese citizens don’t seem have a lot of trust in their government for some incomprehensible reason.

What caused the crash? According to Business Insider:

When prices began to dip, these investors were forcing to sell shares to pay back the borrowed money and cover losses. That vicious circle of selling is creating “panic” and pushing down prices.

So in other words, prices rose too much too quickly, leading to an inevitable downturn, like these pandas going up and down a slide:

Most of the people affected by/involved in the crash aren’t big-time brokers, but ordinary Chinese people. There are about 90 million of these “retail investors”— more than the total membership of the Chinese Communist Party. Unfortunately, these retail investors aren’t especially market savvy and are quite prone to panic, like this panda during an earthquake:

This (the massive number of retail investors, not the panda) makes the market especially volatile.

Experts say the crash is not over yet and that stocks will continue to fall, like this little guy, except with way more financial ruin (and possibly a few suicides):

Does this mean that China is doomed? Maybe not! Qu Hongbin, HSBC’s chief economist for Greater China, quoted in Business Insider, says, “The stock market wealth effect in China is smaller than many assume, as stocks represent less than 15% of household financial assets and equity issuance accounts for less than 5% of total social financing.”

Furthermore, corporations in China don’t rely on stocks all that much, and local investors are unlikely to be scared off by the market crash. China’s citizens tend to look at the stock market as a place to make a quick yuan, not an overall indicator of the country’s economic health. China’s stock market simply isn’t linked to its nation’s prosperity in the way that America’s is.

A lot of ordinary Chinese people will lose a big pile of money, but the nation itself is unlikely to collapse. Still, the government will continue to try to keep stocks from tumbling further, like these hilarious cubs:

So why did the government intervene with such desperation if China’s economy wasn’t really at risk? It has to do with saving face, according to The Economist. The stock market crash damaged the Communist Party’s credibility and prestige, just as this panda repeatedly damaged a tree branch:

But let’s get to the important issue: how will this affect America (and other countries I guess)? Fortunately for us, there aren’t many foreign investors or companies involved in China’s stock market, so we’re not likely to feel any massive immediate effects. But there are still a few things to worry about. Those (now broke) 90 million retail investors are not going to have as much money to spend, which will put a dent on the sale of luxury goods produced by foreign companies. CNN writes:

The real concern for those outside China is an economic slowdown and wider impact from a fluctuating stock market.

Fears of a downturn in China have already hammered the price of commodities like iron ore and copper this week.

In the longer term, this could also hurt places like Australia, which supplies of a lot of China’s raw materials.

Let’s hope that doesn’t happen. But if it does, we will be there to report on it with offensively trivializing YouTube clips:

Keiynan Lonsdale: 5 Reasons We're Currently Swooning Over the Queer Aussie Stud
These 3 Iconic Gay Films Almost Had Completely Different Casts
The Bechdel Test Is the Bare Minimum for Gender Equality On-Screen ... and Hollywood Is Still Failing It
MeowTalk Translates Your Cat's Meows Into Words You Can Understand
English