Written by Daniel Villarreal on April 2, 2015
Be first to like this. 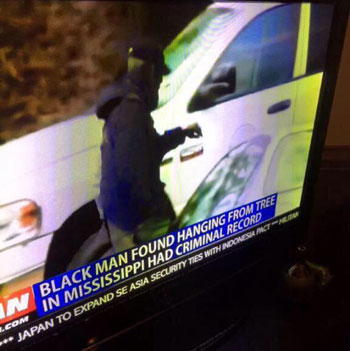 When CNN covered the hanging death of 54-year-old African American Mississippi man Otis Byrd, they chose to reference his previous criminal history (the 1980 murder and robbery of a woman for whom he was imprisoned until 2006).

But many wondered, why reference the criminal past of a man who had either committed suicide or was murdered? Would CNN do the same for a white suicide/murder victim? Many thought not.

So in response, Twitter users began using the hashtag #CNNBeLike to parody racism in the media. It’s reminiscent of the #IfTheyGunnedMeDown hashtag started last year after mainstream media showed pictures of shooting victim Trayvon Martin in a basketball jersey flashing a peace sign (or as some news sites called it “a gang sign”) rather than using a picture of him in his graduation robes. People began posting photos of themselves sloppily dressed alongside ones of them looking professional and asked, “Which photo would they use #IfTheyGunnedMeDown?”

While it makes sense for media to look into a victim’s criminal history, there’s a continued (and well-substantiated) perception of media bias against people of color. #CNNBeLike makes you think about how and why the media portrays people of different races with varying levels of sympathy, caution, ambivalence, indifference, or outright hostility.

#CNNBeLike 40 black people killed in a mass murder, but on March 12, 1963 one of those 40 was arrested for battery and assault

#CNNBeLike If you are just catching up white people can only be heroes otherwise they are mentally ill or being attacked. #AndreasLubitz

CNN is so trash. Their debates are tragic. #CNNBeLike "Is the N word worse or is 'Cracker' worse?"
* 3 white Christian men debate on topic*

#CNNBeLike Plane crashed due to extreme turbulence, could Terrorists be to blame for the bad weather?

When white people kill innocent people their just misunderstood or need help, but when black people do it we're animals & thugs. #CNNBeLike

SCREAMING "@XLNB: #CNNBeLike Suspect was deemed dangerous due to his size. Cops were in fear for their lives. pic.twitter.com/zMImShAKpF"

How the Middle East Moved From Tolerant of Homosexuality to a Battlefield of Anti-Gay Violence
This Gay Reddit Dad Got Some Uplifting Reassurance About Coming Out to His Son
Remember When Chumbawamba Worked With the Sisters of Perpetual Indulgence?
Kaohsiung Pride Makes Bid To Host WorldPride 2025 in Taiwan
English