Written by Matt Keeley on November 7, 2015
Be first to like this.

Jessica Udischas has been drawing the semi-autobiographical Manic Pixie Nightmare Girls (or MPNG to fans) since July 2013. Udischas’ cute character designs are a perfect compliment to strips about facing transphobia in daily life. She recently sat down with Unicorn Booty for a interview about her work — which we’ve illustrated with Udischas’ personal picks for her favorite strips. You can follow Udischas on Tumblr, Twitter, Facebook or Patreon. 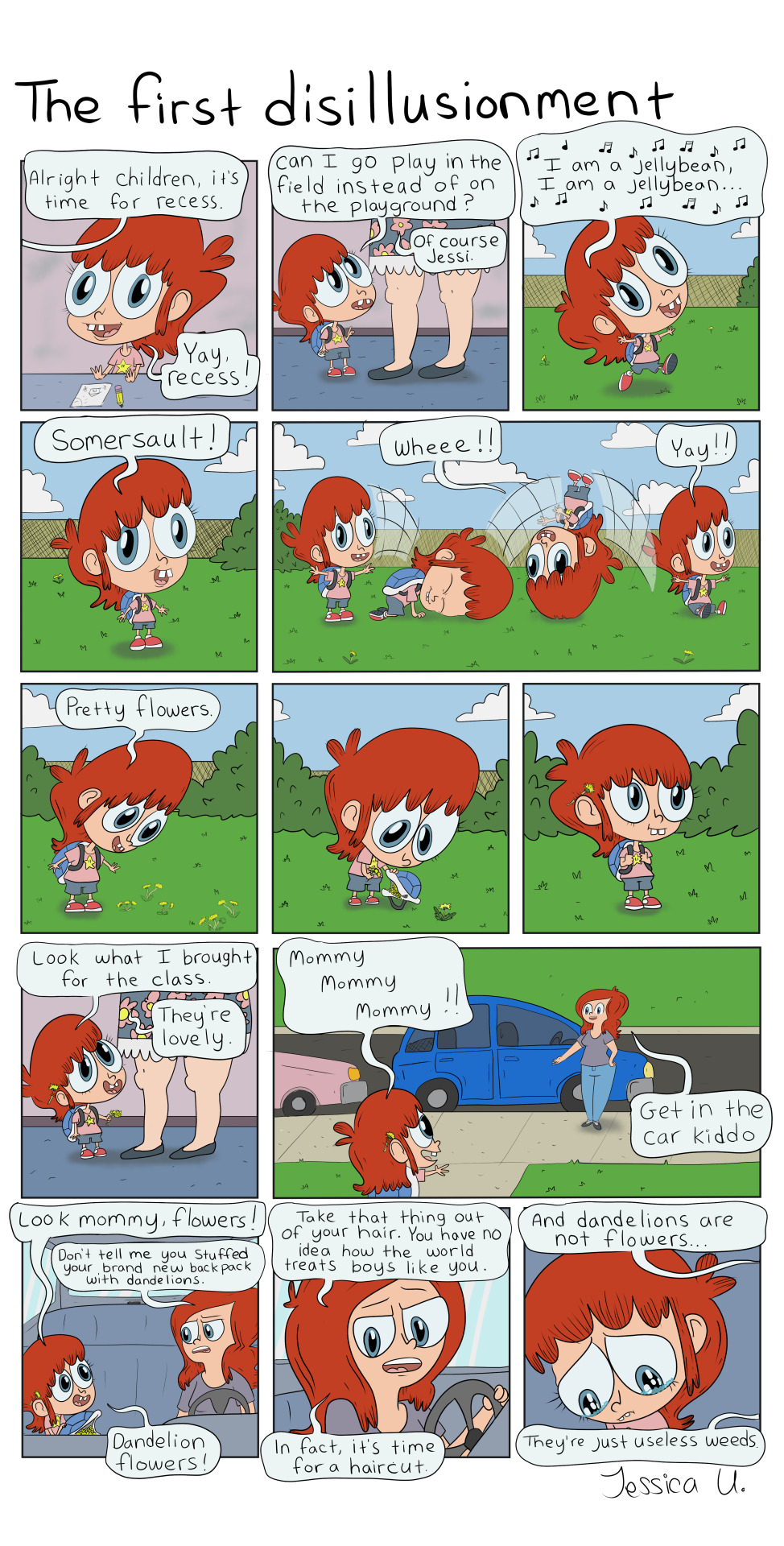 Unicorn Booty: How long have you been making comics?

Jessica Udischas: I’ve considered myself a cartoonist nearly all my life and have always made comics and stories with drawings here and there while growing up. I was the kind of kid who would have doodles all over their homework and get marked off for it. I wasn’t really the type to care about my grades so I didn’t mind. But it wasn’t until a year and a half ago did I actually get up off my butt and started making comics on a regular basis.

I’ve loved cartoons since I can remember, and would crudely draw all my favorite characters from TV and movie cartoons and comic strips. The Simpsons, Ren & Stimpy, Tiny Toons, Calvin & Hobbes, and Bone were just a few of my favorites growing up. But I still feel like I am learning how to be a cartoonist and am influenced by a lot of new stuff as well. I’m a huge Steven Universe fan and hope someday I can flesh out such strong characters. I also love the cartooning and humor in the comic strip Butthug by Shmorky and Camp Weedonwantcha by the incredibly talented cartoonist Katie Rice. 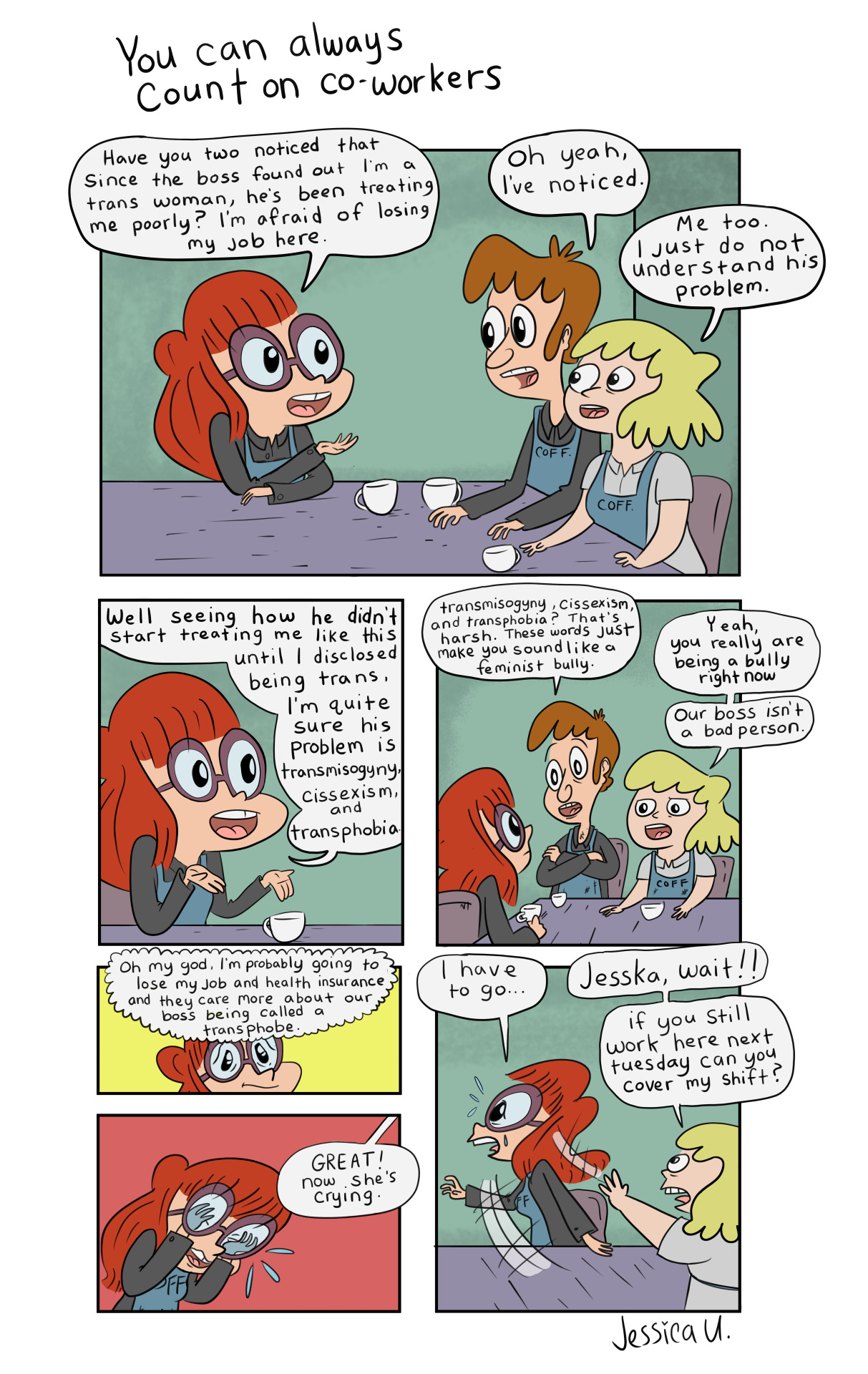 Have you gotten a good response with MPNG?

Yeah, it’s been pretty incredible and I did not see it coming. I was at a pretty low point in my life when I started doing these. I was experiencing intense transphobia from all around me at the same time. Work, family, old friends, roommates, it seemed like I could do nothing right and was beginning to think it was me who the the problem. And it was such incredible validation when folks started catching sharing my comic and sending me messages saying they’ve have had similar experiences, like hooray, I’m not alone!

How close is MPNG and Jesska in the strip to your real life?

A lot of it comes directly from real life, some of it is made up but similar things have happened to me or friends, and of course some of it I just completely made up. Like one of my latest is about my mom and I having breakfast, that conversation didn’t happen, we didn’t talk about halloween costumes. But that’s the attitude she’s had while I’ve tried to talk to her about transmisogyny. And she even agreed that it’s pretty accurate. 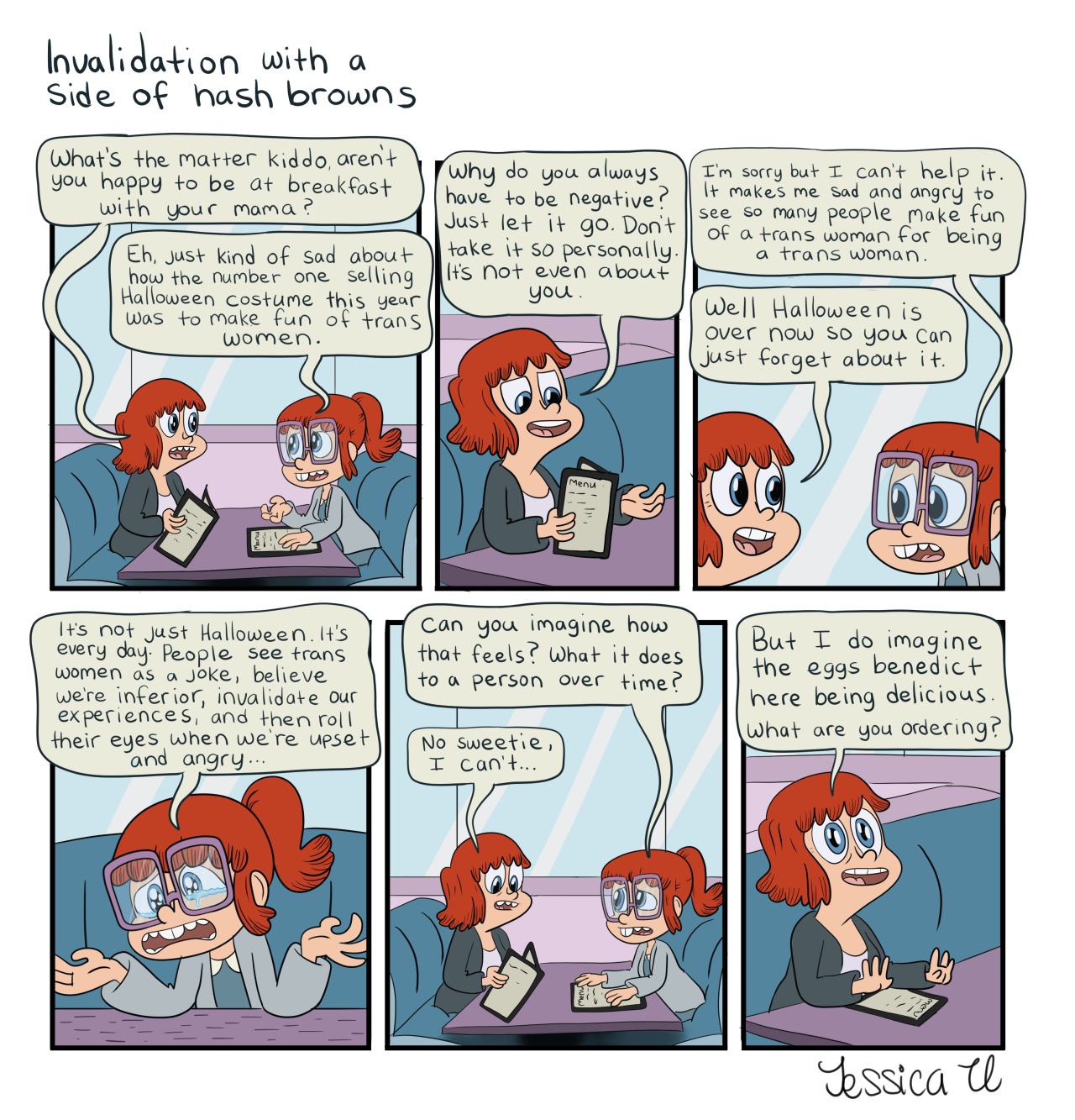 Do you listen to music when you work? If so, what do you like?

I am a big music fan and usually have something or other that I have going on in the background. Lots the time its a band or artist I enjoy like Colleen Green, Rilo Kiley, Mates of State, Lawrence Arms, Pogo, or Purity Ring. But also when I need motivation I put on a video game soundtrack because often it has a “you can do it, keep going” vibe. Like the soundtracks for the Super Mario games, Fez, and the Scott Pilgrim game.

Have you ever gotten any hate mail about your work that were so absurd it made you laugh?

Nearly all the mail I get is from other trans women saying they relate to what I’m saying and how much they love the strip. I also get mail from cis people saying how the comic has opened their eyes to the trans woman experience in ways they haven’t seen in the media before. And the hate mail I get is mostly just transphobes telling me to die, find God, saying I’m “spreading feminist lies” which I guess is a funny one.

But recently I did come across a internet message board that people use to make fun of feminists and social justice minded folks with a whole forum dedicated to my comic, and that stuff is actually really hilarious. It’s mostly them spinning what I have to say and purposefully missing the point of my comics to make it seem like I’m some kind of boogie monster. But yeah, they dug up photos of me and one even made some hate-fan art which I thought was weird because why put some much time into something you hate so much?

If you could say one thing to the Trans-Exclusionary Radical Feminists (or TERFs) of the world, what would it be?

Nothing. Speaking to many well-meaning cis allies can be like talking to a brick wall, let alone a person whose core belief is hatred against you. When you have an ideology that is based all around hating a marginalized group of people there is nothing you can say to make that person see your side. 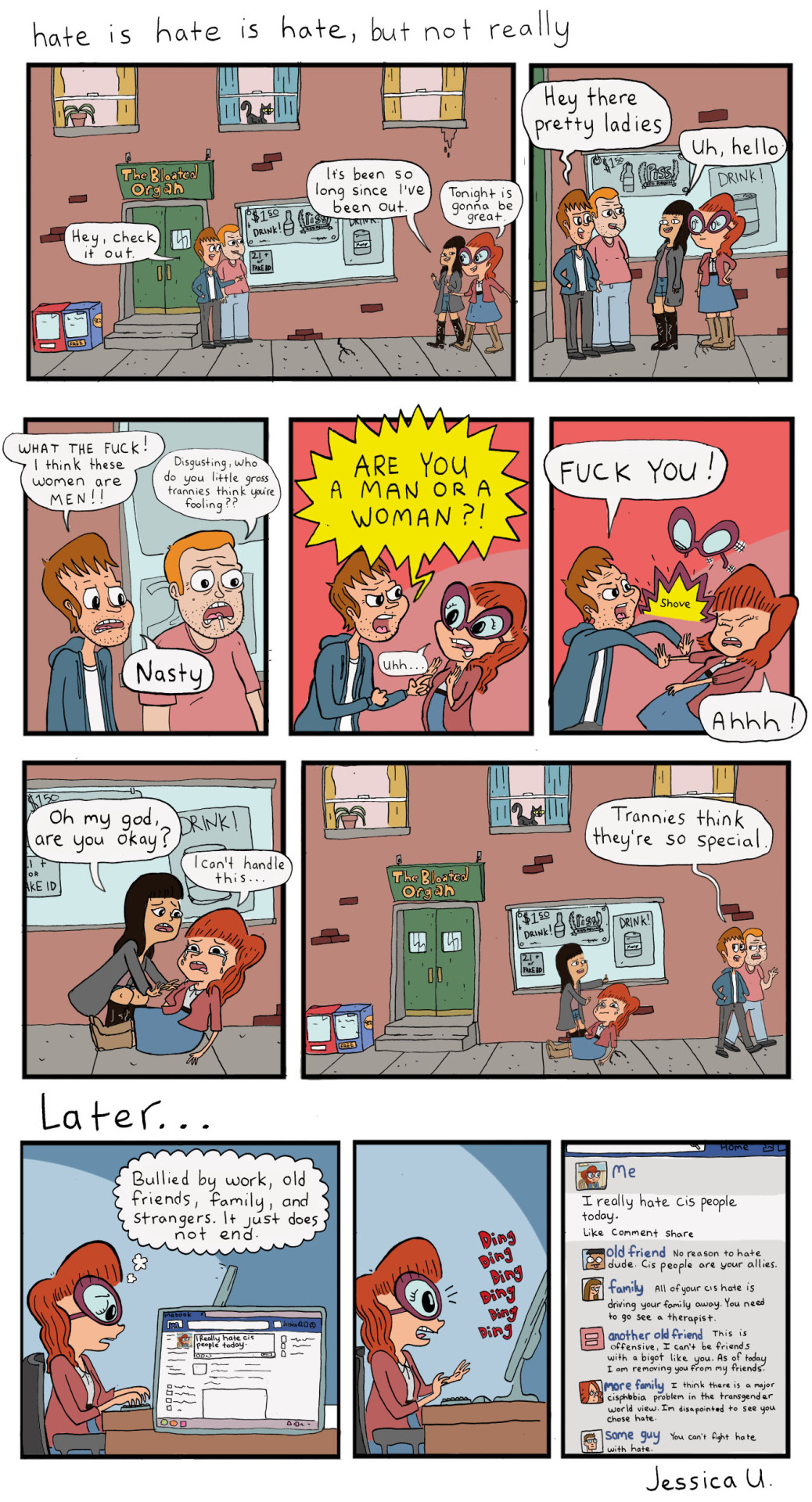 Likewise, is there anything you’d like to say to the allies of the world?

Oh yes. Do not take it personally when trans folks vent about the oppression we face and realize that even though you don’t want to be, you are part of the oppressing side. It can be a tough pill to swallow because we all like to think of ourselves as good people and we know bigotry is something that makes a person bad. But it’s not that simple. One of the biggest homophobes I’ve ever known dedicated much of their life to helping homeless people — was she a bad person?

Our society is filled with hatred towards trans people, especially trans women. And as much as we’d like to think we’re above what the rest of society thinks, it’s impossible not to internalize at least some of the hatred. And you might not even realize you have bad feelings towards trans women… But it comes out in small ways like getting annoyed with your trans co-worker much easier, not taking us as seriously, dismissing our concerns, etc.

We’re all human and not one of us is above feeling hatred and bigotry, it’s something we all can experience no matter how good of a person we are. But the good news is that each of us can work on being better people towards each other. 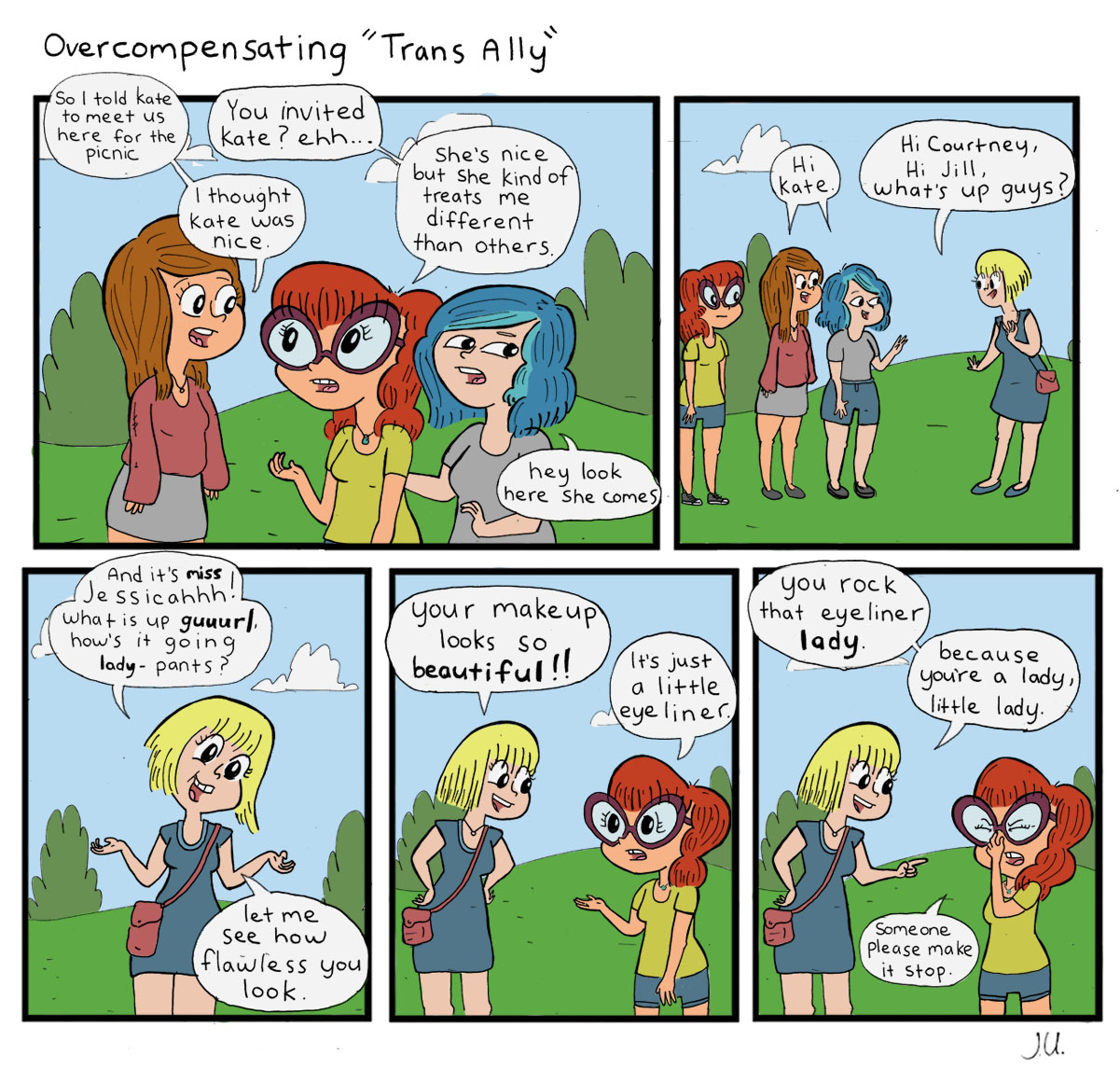 Have you ever gotten any pushback from your ally character from misunderstanding/confused/wrong cis allies?

Honestly, it’s been mostly positive. The fan letters I get from cis people mostly talk about how that first comic with the ally really opened up their eyes to the way they treat trans women.

What LGBTQ comic creators would you like to recommend?

I honestly do not read many comics but I do recommend people check out The Blue Valkyrie by Emily Reisbeck. It’s about a trans woman superhero which is pretty neat. Wolfmen by Calvin Gimpelevich is pretty great as well.

These 10 Sexy Emojis Are Perfect for Late-Night Sexting
The Year's Best LGBTQ Albums: 31 Releases That Kept 2021 From Being a Total Downer
Nice Abs, Bro, But Where's Your Face? 4 Tips to Taking the Perfect Profile Pic
Help Spread the Gay Agenda With These LGBTQ Children's Books
English