Written by Stephan Horbelt on March 4, 2017
Be first to like this.

Anyone who has ever stumbled upon the “Men Seeking Men” section of Craigslist understands there is no place quite like it. With page after page of men — some closeted, some proudly out — seeking everything from a tender embrace to speedy casual encounters to the most outlandish of fetishes, the site is a popular destination of guys looking for action and voyeurs craving a peek into the peculiar. One London-based artist is particularly intrigued by the site’s personal ads, and his Craiglist ad illustrations — included in a book by the name of (no kissing), available now — are quirky commentary on a compelling aspect of gay culture.

Dominic Myatt claims he was a frequent user of Craigslist, himself a gay man, when he stumbled upon London’s “Men Seeking Men” page.

“Drawn in by the entanglement of desperation, urgency, fetish and humour,” Myatt set out to illustrate some of the listings that stood out to him most, presenting his drawings along with the ads’ text, complete with typos. The sex these men seek is not often discussed in the mainstream; by illustrating them, he’s exposing them to sunlight, often to the amusement of those who had no idea such peccadilloes existed.

In an interview with Dazed, Myatt was asked about his book’s blurring of lines, “between private and public, pleasure and revulsion,” to which he replied, “It’s run through my work since my final year of university – this line between revulsion and pleasure, and too much pleasure and ecstasy turning into something that was unbearable and overwhelming.”

From the interview, one gets the sense that Myatt isn’t placing these men on display to be laughed at, but instead is commenting on queer shame, something most gay man face at some point or another.

Check out some of the illustrations below (click to enlarge): 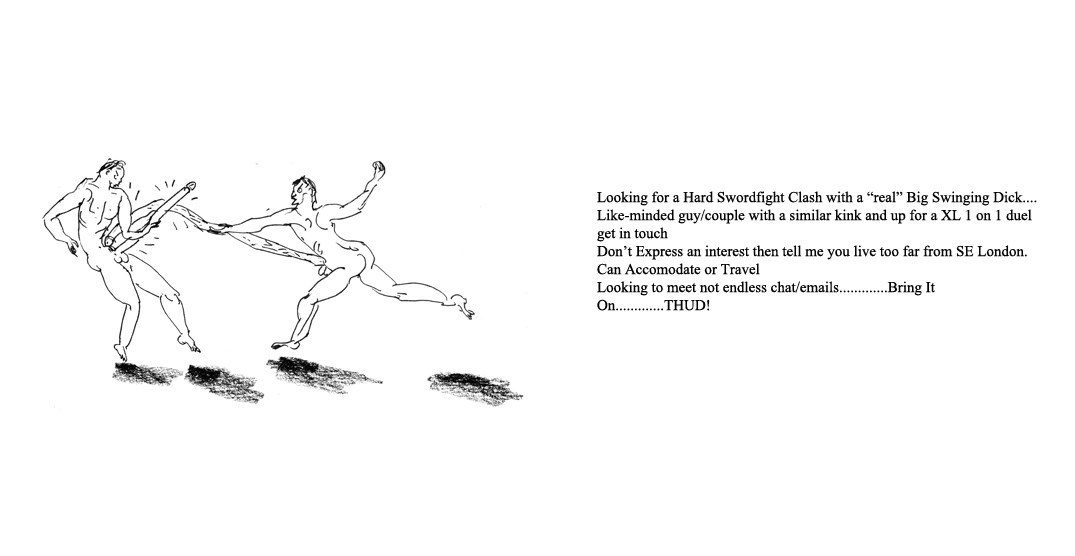 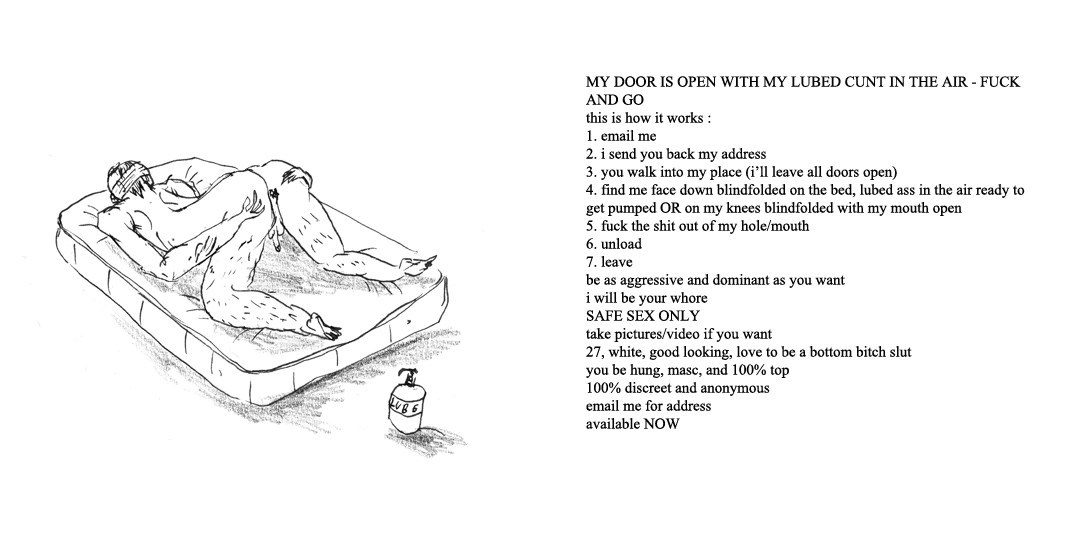 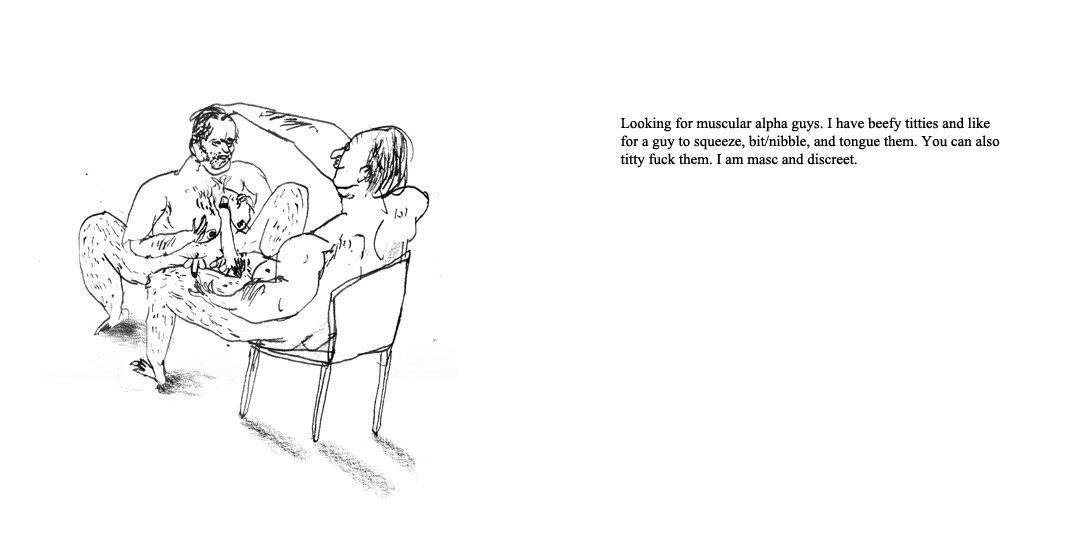 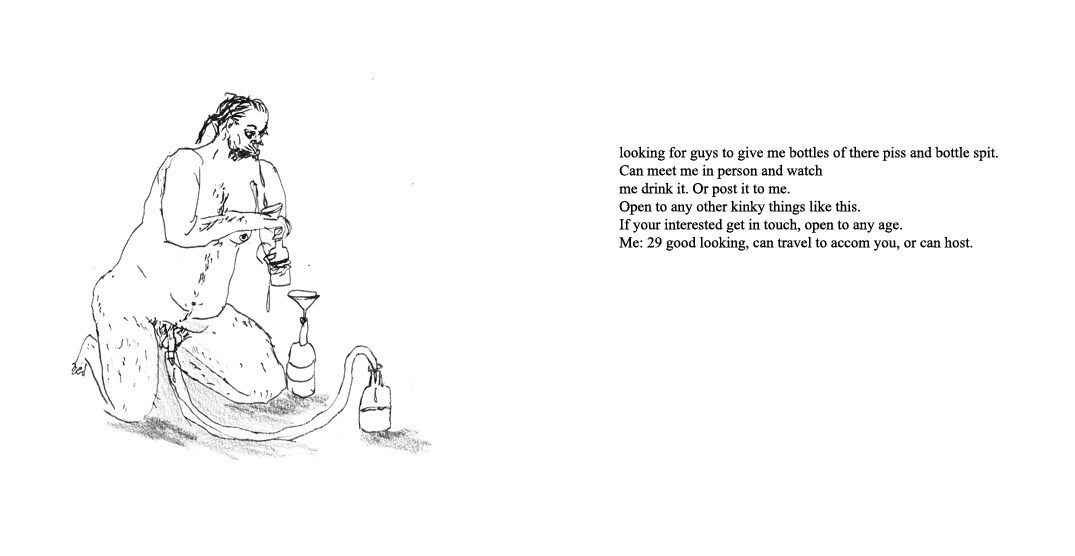 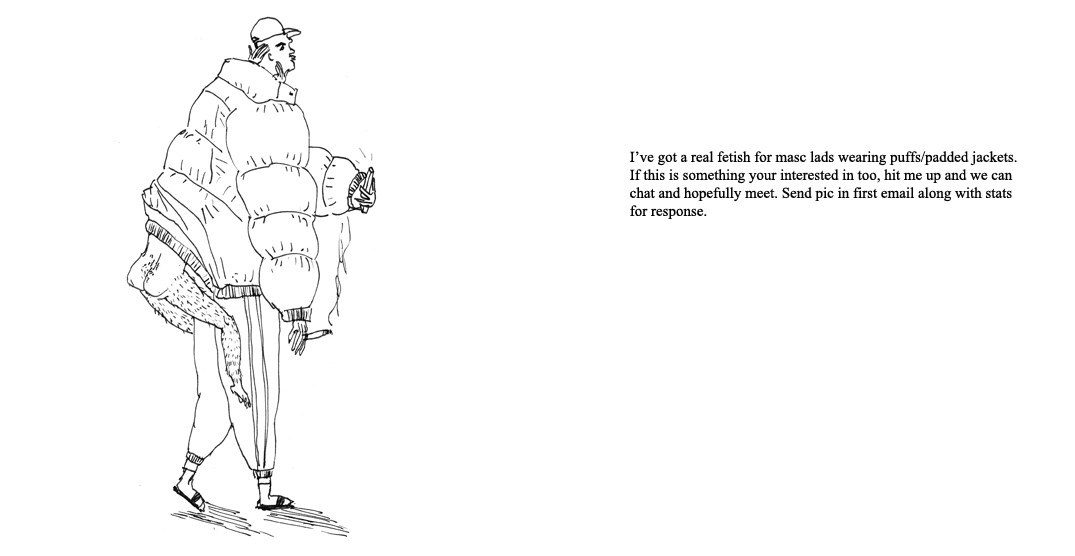 If you find yourself in the UK on March 17, you can attend the UK launch of Myatt’s (no kissing) at Hoi Polloi in Shoreditch, London.

The CW's 'Two Sentence Horror Stories' Is Bringing Serious Queer and POC Representation to the Genre
5 Things That Happen to Your Body After a Breakup
Our 'American Psycho' 30-Product Personal Grooming Regimen Is Killer
Altitude Adjustment: 5 Things You Do at the Airport That Make You an A-Hole
English