Written by Daniel Villarreal on October 30, 2015
Be first to like this.

There have been nine cases of robbery and assault on gay men in the Dallas gayborhood known as Cedar Springs since the city’s September 20 Pride parade. Police attribute five of the attacks to a four-man group — the night of the parade, one of the group members attacked a man named Blake with a baseball bat and left him bleeding in the street; on October 10, the assailants stabbed Jaime Dominguez in the chest, neck, ribs and head. The four other incidents involved a lone assailant holding people at gunpoint and a separate group of men knocking down, kicking, punching, and robbing their targets.

During that time, a vandal also smashed in the glass doors of three local gay bars in the early morning hours.

Although police have said that the attackers are “zoning in” on Cedar Springs, officers are only investigating the September 20 attack as a hate crime. Meanwhile, as local activists and law enforcement try to prevent future attacks, a rift has developed between local citizens and the Dallas Tavern Guild which runs eight of the Cedar Springs’ gay bars.

During a packed October 21 meeting at the local LGBT community center with Dallas City Council members, a local police chief, 10 cops and members of the Mayor’s LGBT Task Force, the police promised increased foot patrols, police cruisers and plain clothes detectives in the area. Mindful of that promise, local activists John Anderson and Daniel Scott Cates are petitioning the city and area businesses to commit to a larger campaign called “Lights. Camera. Action!”

(Full disclosure: Cates is a friend and local cultural collaborator with the author of this article)

True to its name, the campaign seeks greater lighting in the surrounding streets, surveillance cameras in high crime areas and investment in private security forces and other methods to keep the area’s citizens safe. Cates and Anderson organized an October 10 rally to draw attention to the violence and have organized a march this coming weekend to rally community support for their suggested improvements.

However, in an October 29 Facebook comment Michael Doughman, Executive Director of The Dallas Tavern Guild, said that he sees Cedar Springs as largely safe, suggesting that the survivors of the attacks are partly responsible for their being targeted:

“[The response to the attacks] is a media campaign and only one of the assaults has been identified as a hate crime. Our local media is creating a media firestorm that doesn’t really exist. We have one of the safest areas in Dallas by police reports. Almost every attack is on individuals walking alone, late at night and intoxicated. Never a good idea. I hate that the media is making the area sound so dangerous. It’s not dangerous if you just behave smartly.” 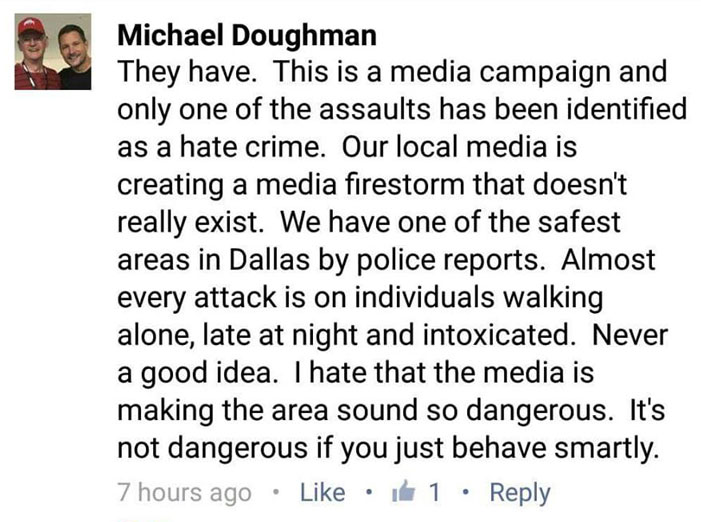 “Our community, the LGBTQ community, the community you serve and are a member of, has seen a major spike in violent crimes against us. Whether or not hate has been a factor in all of them is irrelevant. They are happening, period… and to skew statistics to keep from losing business is not only untruthful, it is dangerous and disgusting. To blame the survivors of this violence for their attacks is disrespectful, does further violence to them and displays ignorance of the fact that your businesses contribute to the conditions you bemoan.

We have a real issue on our hands in Oaklawn and we need to tackle it as a community. Burying our heads in the sand and pointing fingers at those who have taken the physical and emotional punishment is not going to get the job done. It is time for you and the rest of the DTG to show us if you are IN this community or in it for the money. Right now it is difficult to tell.”

In a telephone interview with Unicorn Booty, Cates stated, “[Doughman] says that walking  around the gayborhood intoxicated is a bad idea. Well, where does he think they’re getting the drinks from?”

“I get criticism regardless of what I do. There are detractors to anything that you say… It has always been requested by the city and by the police department [patron security] it be a two-way street. The community and the merchants and the customers have to all work together and be vigilant for something like this… Criminals are opportunistic; they take advantage of easy targets. And if people are out late at night, and if they’ve been at the club for an extensive amount of time, and they’ve had several drinks and they’re out walking home late at night, that’s not a safe move. It’s not a safe move if you’re sober… Some of the [attack survivors] have been, and I’m not saying that’s a reason they deserve to be attacked… Selling alcohol is part of our business. But also being vigilant with our customers is part of our business.”

Doughman added that he considers the recommendations of the Lights. Action. Camera. campaign to be worthwhile but says that the Tavern Guild doesn’t have a resource or slush fund to help fund the changes, adding that as a non-profit, the guild distributes its money to AIDS, HIV, and health services.

“Unfortunately when you get into those situations where you go to City Hall and ask for better lighting and everything… you’ll find financially that the city is able to do very little. It ends up being the merchants and the businesses on the streets that pay to have security cameras and extra lighting… And if you don’t own your property, then [some of the suggested changes] becomes a discussion between you and your landlord: do they want to make the investment, do they want to spend the money. Most of the clubs on Cedar Springs and on the Strip area have security cameras, security systems, and have had them for years… We have been reasonably prepared for any kind of incident for some time.”

LEGO's 'Everyone Is Awesome' Pride Set Has Proven That Everyone Is Not So Awesome
10 Songs About Gay Sex That Make the Perfect Naughty Playlist
This Couple Tried to Create an All-Gay, Hate-Free City in Nevada
Here's How to Throw Your Own 'To Wong Foo'-Worthy Strawberry Social
English