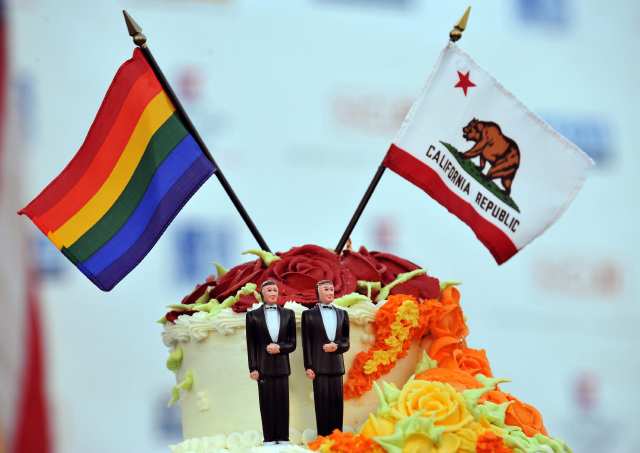 Last month California LGBT couples petitioned the Ninth U.S. Circuit Court of Appeals to lift the stay preventing same-sex marriage licenses from being issued while the constitutionality of Prop 8 is decided upon by the state’s Supreme Court. The couples argued that since Prop8 was already ruled unconstitutional, that a stay inflicted further harm on California’s LGBT citizens by preventing them access to equal rights.

We agreed. What’s there to even argue with here, really?

The court disagreed with us. SF Gate reports:

Every day that gays and lesbians are denied the right to marry while the case is on hold “is a day that never can be returned to them,” Theodore Olson, a lawyer for the couples, said in court papers.

In a one-sentence order today, the three judges on the federal court panel said they had reviewed the arguments and the applicable legal standards, and “we deny plaintiffs’ motion at this time.”

Prop. 8 overturned a May 2008 ruling by the state Supreme Court that legalized same-sex marriage in California.

The appeals court put his ruling on hold while it reviewed an appeal by Prop. 8’s sponsors, a conservative religious coalition called Protect Marriage.

Damn. Losing a battle like this makes it difficult to believe that we’ll win the war in the end, but that absolutely has to be the case. The decision to enforce the stay is a big bummer, but remember, Judge Walker already ruled Prop 8 to be an illegal and discriminatory law. It may not look it, but we are actually way ahead on this one.

Are you disappointed with today’s court decision to temporarily continue the ban on same-sex marriages in California?

From the Science of Sex to Nazi Destroyers, 11 of the Coolest Queer People in Science
The Cockettes: Remembering a Legacy of Glitter Beards and Daring Drag
Let's Explore the Story of Biblical Namesake King James I and His Lifelong Gay Lover
The Police, Disguised as Patrons, Attacked Queer People at the Black Cat Tavern
English