Dragon Age To Anti-Gay Fans: Get Over It 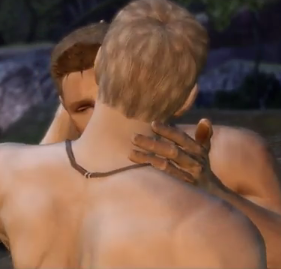 Straight up, we have absolutely no idea what Dragon Age 2 is all about, and we haven’t done much gaming since catching both Palkia and Dialga a few Pokemon cycles ago. Suck it, Giratina! But we know you gays are big gamers, and we aim to please.

Just like the creators of Dragon Age 2, it seems. The massive multiplayer online extravaganza made waves with its release because of its ability to let players romance and bed absolutely anyone in the game. Lady elves get down with human men, Human women can get freaky deaky with Charizards, or whatever. (No, not Charizards? Why not? Charizards need love too!)

Anyone extends to same-sex relationships in the game as well, which is obviously a fantastically inclusive stance for a developer to take. And for the most part, Dragon Age players have been completely supportive of the move, if they notice at all. After all, just like in real life, you can’t make someone gay just by flirting with them. Free will prevails.

Some bonehead however decided to speak up on behalf of all straight gamers in the galaxy and denounce the man-love in DA2 on the online forums for the game’s creator, BioWare.

To summarize, in the case of Dragon Age 2, BioWare neglected their main demographic: The Straight Male Gamer.

I don’t think many would argue with the fact that the overwhelming majority of RPG gamers are indeed straight and male. Sure, there are a substantial amount of women who play video games, but they’re usually gamers who play games like The Sims, rather than games like Dragon Age. That’s not to say there isn’t a significant number of women who play Dragon Age and that BioWare should forgo the option of playing as a women altogether, but there should have been much more focus in on making sure us male gamers were happy.

Now immediately I’m sure that some male gamers are going to be like “YOU DON’T SPEAK FOR ME! I LOVE DRAGON AGE 2!”, but you have to understand, the Straight Male Gamer, cannot be just lumped into a single category.

Its ridiculous that I even have to use a term like Straight Male Gamer, when in the past I would only have to say fans, …”

Um, the ridiculous part isn’t your use of the term SMG, it’s the fact that the pixelated act of smooching in an online world full of rippled muscles in leather thongs and loincloths is the thing you perceive to be overtly homosexual. Your cool with your likeness being represented by a character whose asscheeks are hanging out, but not with anything “gay.” I see.

BioWare’s David Gaider, to the delight of this gay blog, hands the delegate from Straight Male Gamer-ville his ass in a fantastic rebuttal.

The romances in the game are not for “the straight male gamer”. They’re for everyone. We have a lot of fans, many of whom are neither straight nor male, and they deserve no less attention. We have good numbers, after all, on the number of people who actually used similar sorts of content in DAO and thus don’t need to resort to anecdotal evidence to support our idea that their numbers are not insignificant… and that’s ignoring the idea that they don’t have just as much right to play the kind of game they wish as anyone else. The “rights” of anyone with regards to a game are murky at best, but anyone who takes that stance must apply it equally to both the minority as well as the majority. The majority has no inherent “right” to get more options than anyone else.

More than that, I would question anyone deciding they speak for “the straight male gamer” just as much as someone claiming they speak for “all RPG fans”, “all female fans” or even “all gay fans”. You don’t. If you wish to express your personal desires, then do so. I have no doubt that any opinion expressed on these forums is shared by many others, but since none of them have elected a spokesperson you’re better off not trying to be one. If your attempt is to convince BioWare developers, I can tell you that you do in fact make your opinion less convincing by doing so.

And if there is any doubt why such an opinion might be met with hostility, it has to do with privilege. You can write it off as “political correctness” if you wish, but the truth is that privilege always lies with the majority. They’re so used to being catered to that they see the lack of catering as an imbalance. They don’t see anything wrong with having things set up to suit them, what’s everyone’s fuss all about? That’s the way it should be, any everyone else should be used to not getting what they want.

The truth is that making a romance available for both genders is far less costly than creating an entirely new one. Does it create some issues of implementation? Sure– but anything you try on this front is going to have its issues, and inevitably you’ll always leave someone out in the cold. In this case, are all straight males left out in the cold? Not at all. There are romances available for them just the same as anyone else. Not all straight males require that their content be exclusive, after all, and you can see that even on this thread.

Would I do it again? I don’t know. I doubt I would have Anders make the first move again– at the time, I thought that requiring all romances to have Hawke initiate everything was the unrealistic part. Even if someone decides that this makes everyone “unrealistically” bisexual, however, or they can’t handle the idea that the character might be bisexual if they were another PC… I don’t see that as a big concern, to be honest. Romances are never one-size-fits-all, and even for those who don’t mind the sexuality issue there’s no guarantee they’ll find a character they even want to romance. That’s why romances are optional content. It’s such a personal issue that we’ll never be able to please everyone. The very best we can do is give everyone a little bit of choice, and that’s what we tried here.

And the person who says that the only way to please them is to restrict options for others is, if you ask me, the one who deserves it least. And that’s my opinion, expressed as politely as possible.

What do you think of Dragon Age’s response to the “Straight Male Gamer” rep?

Via No More Lost

Examining the History and Development of the Worst Trope Ever, 'Bury Your Gays'
Boxers and Briefs: We Ranked Our Favorite Male Celebrity Calvin Klein Underwear Ads
Nirvana Pushed Back Against Homophobia and Kink-Shaming at This 1992 Benefit Concert
Gay Pirates Were Very Real, and We’ve Even Got the Sea Shanty to Prove It
English