Written by Terri Washington on June 4, 2015
Be first to like this.

June first became a historic day in LGBT history as Caitlyn Jenner, formerly known as Bruce Jenner, emerged as her true self on the cover of the June 9 issue of Vanity Fair magazine. Supporters from all over the internet made Caitlyn a trending topic through supportive tweets and messages. Caitlyn Jenner’s twitter account gained over one million followers — faster than any other person in history. 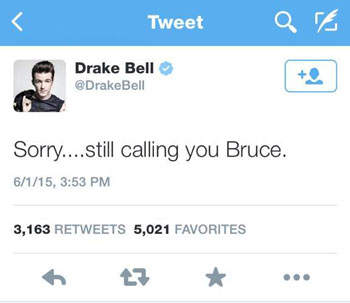 All seemed well in the transgender community until singer-actor Drake Bell tweeted “Sorry… still calling you Bruce,” which sent fans and supporters of Jenner into a craze. Bell’s claim to fame is portraying the character Drake Parker from 2004 to 2007 on the Nickelodeon TV show Drake & Josh. He also made headlines in 2013 when he publicly criticized Justin Bieber through a series of tweets.

Bell’s latest Twitter snafu has triggered much support of Jenner and hatred of Bell. Bell has received death threats, pleas to deactivate his account and the occupation on his Wikipedia page was changed to “Trans-phobic Trash” for a short time. Bell deleted the tweet soon after and then went on and tweeted “That’s bravery!” in a thinly veiled attempt to save face. 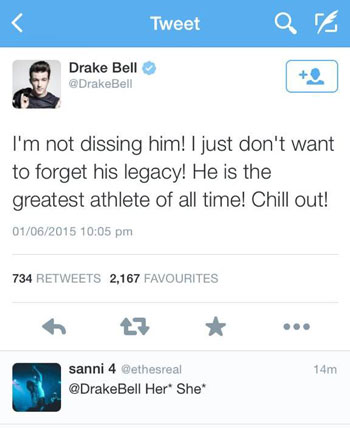 “I’m not dissing him! I just don’t want to forget his legacy;” Bell, explaining himself through Twitter, continued “he is the greatest athlete of all time! Chill out!”

Although Bell’s popularity and relevance in 2015 is questionable, his statements were clear as day. Even if Bell was being truthful in saying that he will always remember Jenner as one of the greatest athletes of all time, his lack of acknowledging the momentous change in Jenner’s life proves that he doesn’t take Jenner seriously – or at least who Jenner truly is and always has been.

Jenner will always be one of the greatest athletes of all time, regardless of gender, but after Jenner said, “Call me Caitlyn” on the cover of Vanity Fair, Bell should have addressed Jenner as Caitlyn. In no way, shape, or form does Jenner’s transition take away from Jenner’s accomplishments. Using the appropriate pronouns won’t take away the legacy either.

Gender Expression and Sexual Identity in African Cultures Existed Outside the Binary Until Imperialism
Celebrating Five Years of the Tom of Finland Store Through Pics of Its Hunky Model/Muse, Terry Miller
7 Important Facts About Gay and Bi Men Who Suffer From Eating Disorders
Here's How Leading Psychologists Say 'Traditional Masculinity' Harms Boys and Men
English