Drug of the Week: Spice

Written by Daniel Villarreal on March 2, 2015
Be first to like this. 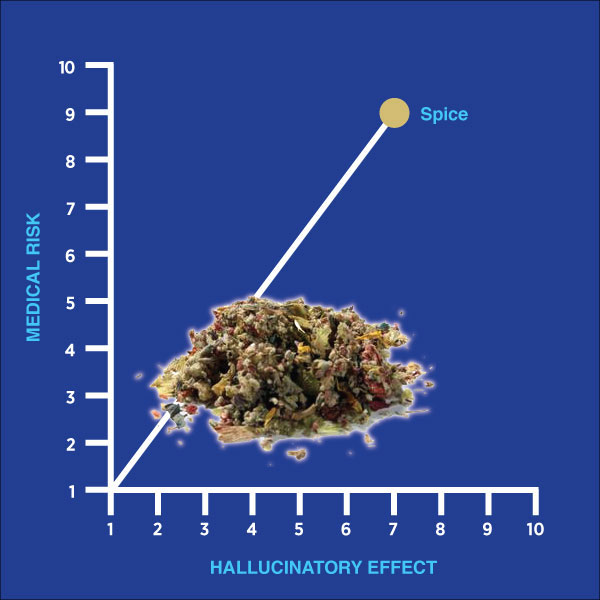 I used to smoke a lot of Spice. Even though it’s being outlawed in an increasing number of states and countries, you can still buy it at head shops across America — it comes different shiny packages bearing names like K2, Kush, and Kanabliss. They’re commonly referred to as “synthetic weed,” but Spice ain’t like no weed I’ve ever smoked.

First off, the stuff is sold as “incense,” often with the caveat “not for human consumption” (haha, right), and each type is made differently with synthetic cannabinoids that are much more potent than typical weed with less predictable effects. Yeah, you might feel relaxed and the moon will look much cooler (check out that wicked halo!), but over time it made me edgy, anxious, and paranoid with much stronger hallucinations — kinda like smoking meth. When I smoked K2, I became ultra chatty, quite twitchy, and wanted to clean my room (things I’d never do on regular weed).

I bought Spice regularly during a time when I couldn’t find real weed, but after getting into a way-too-heated argument with a friend about e-publishing, I decided it wasn’t for me. Probably a good thing: subsequent investigations into the drug have shown that the ingredients listed on its packaging often leave key substances out. Other users have landed in hospitals with rapid heart rate, vomiting, agitation, confusion, and hallucinations that drive them a little bonkers. It’s even being blamed for 700 poisonings and 24 deaths across Russia. Almost makes you long for good old-fashioned weed.

These Hornet Users Had Our Favorite Posts of the Past Week
In the Early 1950s, U.S. Feds Tried to Kill the First Gay Magazine
12 Quotable Campy Movies Every Queer Person Should See at Least Once
Help Spread the Gay Agenda With These LGBTQ Children's Books
English