Written by Daniel Villarreal on October 17, 2017
Be first to like this.

The Chinese-language internet is burning up over a well-circulated rumor that Eddie Peng, a massively popular 35-year-old actor, had an affair with Zhang Lei, the 45-year-old founder and CEO of Hillhouse Capital Group, a  wealth and investment management firm with a $20 billion net worth. Neither Zeng nor Lei are openly gay. While this is definitely still just a rumor, it has been re-tweeted by the CEO of an Asian film company, raising a couple of eyebrows.

If you live in Asia, you’ve probably heard of Eddie Peng. According to shanghaiist.com, Peng is “one of Asia’s biggest and most beloved stars.” He’s a Taiwanese-Canadian actor and model who has starred in 31 movies over the last decade (some of which have been box office successes).

Lei, on the other hand, is a somewhat secretive man who prefers to live frugally and is said to prefer staying out of the press. Neither man is married.

Anyway, in a now-deleted post on Weibo, a massively popular Chinese microblogging site similar to Twitter, a user named 圈少爷 claimed that Eddie Peng had basically offered his body to Lei in order to help further his career.

The post included screencaps of a chat between two anonymous people, one of which claimed that Peng had slept with Lei and that Peng was sexually versatile.

The now-deleted “vague post” about Peng, retweeted by a film company CEO

A social media celebrity with around 900,000 followers also posted a post insinuating involvement between Peng and Lei, and that post was briefly reposted by Liu Chun, CEO of the Zhongnan Film company, before Chun deleted it.

Peng’s team has dismissed the rumor as a complete fabrication (and have alerted lawyers) even though the actor’s close male friend, Hong Kong actor Shawn Yue, once said, “Eddie doesn’t seem to be interested in girls, but he often checks out my body.”

A web commenter speculated that the rumor might have originated from Lei saying that he wanted Peng to be his LP, an abbreviation which means “limited partner” in business-speak but could be understood as “wife” (老婆, laopo) in Chinese.

Featured image of Peng in Unbreakable 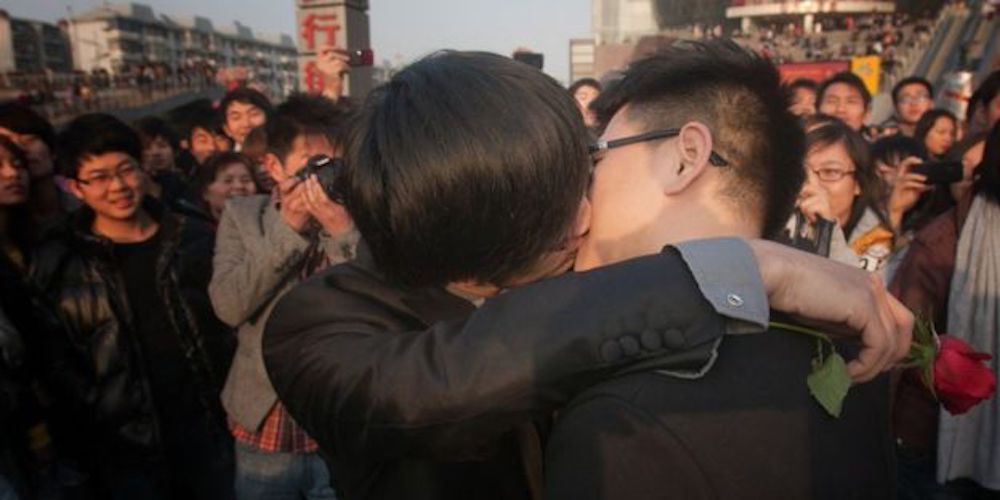