Everything You Need To Know About #BoycottDolceGabbana

Written by Daniel Villarreal on March 16, 2015
Be first to like this. 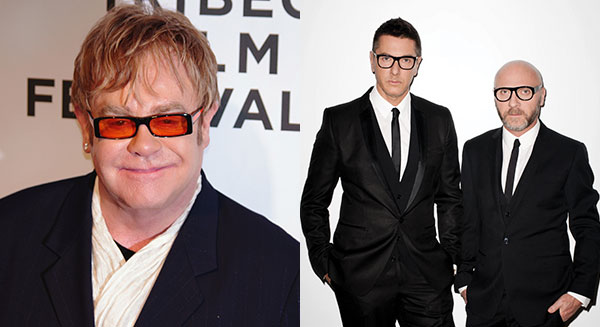 The internet caught fire over the weekend thanks to homophobic comments made by Italian fashion designer Domenico Dolce and Stefano Gabanna (aka Dolce and Gabbana or D&G). Their comments have sparked an international boycott, a Twitter backlash, and probably the worst PR apology we’ve ever read.

Last week, Domenico Dolce told the Italian magazine Panorama, ”You are born to a mother and a father. Or at least that’s how it should be. I call children of chemistry ‘synthetic children’. Rented wombs, semen chosen from a catalogue… psychiatrists are not ready to confront the effects of this experimentation.”

He continued, ”I’m gay, I can not have a child. Life has its natural course, there are things that must not be changed. And one of these is the family.”

Gabbana added, “The family is not a fad. In it there is a supernatural sense of belonging.”

Unbeknownst to them both, their words are strikingly similar to arguments made by anti-gay groups like the Family Research Council and the so-called National Organization for Marriage for over a decade now to oppose same-sex marriage and adoption. 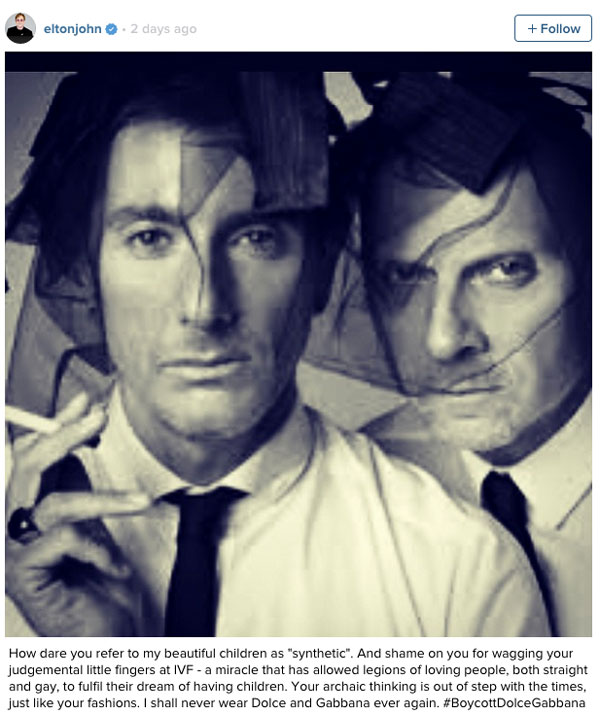 In response to their ill-considered words, British singer/songwriter Sir Elton John posted an image of the two designers and wrote on Instagram:

‘How dare you refer to my beautiful children as synthetic.’ And shame on you for wagging your judgemental little fingers at IVF – a miracle that has allowed legions of loving people, both straight and gay, to fulfil their dream of having children. Your archaic thinking is out of step with the times, just like your fashions. I shall never wear Dolce and Gabbana ever again. #BoycottDolceGabbana’

Gabbana then responded via to Instagram with an image of Elton and his husband David Furnish saying, ‘Who wants to see him in a Dolce and Gabbana dress?’

That’s when things got really heated. The Telegraph reports:

“…Gabbana, in an apparent response to Sir Elton’s criticism, posted a picture on Instagram of a child with its arms wrapped around its mother with the hashdags #dgmamma #dgfamily.

When a friend suggested that Sir Elton needed to ‘calm down,’ the designer agreed and accused him of being intolerant.

‘It is simply arrogant not to tolerate those who think like him! poor thing!’ he wrote. He added: ‘We live in a democratic country and respect the ideas of others.’”

Just round up all my Dolce & Gabbana pieces, I want to burn them. I'm just beyond words and emotions. Boycott senseless bigotry! #boycottD&G

In spite of what @dolcegabbana think, my beautiful IVF children are not "synthetic children". I agree with @eltonjohndotcom

I just read the article. @dolcegabbana sound IGNORANT and STUPID. I agree with @eltonjohndotcom #BoycottDolceGabbana jb

On Sunday, the two designers tried to walk back their comments.

Gabbana said: “We firmly believe in democracy and the fundamental principle of freedom of expression that upholds it.”

Dolce followed with, “I’m Sicilian and I grew up in a traditional family, made up of a mother, a father and children. I am very well aware of the fact that there are other types of families and they are as legitimate as the one I’ve known. But in my personal experience, family had a different configuration. That is the place where I learnt the values of love and family.”

When you think about it, their non-apology is really shitty. First off, Dolce is basically saying that his views have been shaped by the way he grew up, and so he seems them as the best or most natural way of doing things. But gay marriage and adoption aren’t legal in Italy or many other places throughout the world. Just because we grew up in homophobic cultures doesn’t mean we should repeat the same ignorant thinking that have kept gay families illegal for so long. 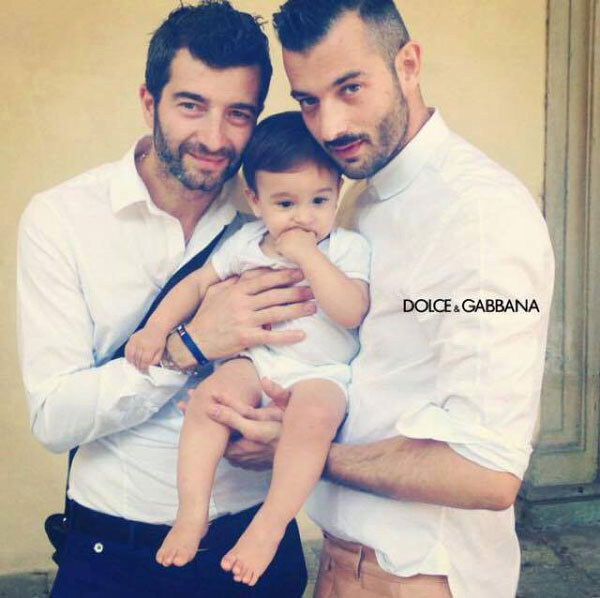 The Telegraph also points out Gabbanna’s hypocrisy on the matter (not to mention the very DILFy gay ad above):

“Despite the views expressed about ‘synthetic’ children, Gabbana disclosed in 2006 that he had asked a female friend to be a surrogate mother for his child.

The designer told an Italian newspaper: ‘I want my own child, a biological child conceived through artificial insemination.’

He said he had asked his friend, who was 12 years younger, to help and said she ‘thought it was a great idea.’

The comments were made the year after he split up with Dolce, having embarked on a new relationship. But he said he did not want his child to have two gay parents, adding: “I am opposed to the idea of a child growing up with two gay parents.

‘A child needs a mother and a father. I could not imagine my childhood without my mother. I also believe that it is cruel to take a baby away from its mother.’”

Fashionista also points out that another famous gay designer Karl Lagerfeld also he opposed gay marriage and male couples adopting kids back in 2010 by saying:

“I’m against it (gay marriage) for a very simple reason: In the 60’s, they all said we had the right to the difference. And now, suddenly, they want a bourgeois life. For me it’s difficult to imagine—one of the papas at work and the other at home with the baby. How would that be for the baby? I don’t know. I see more lesbians married with babies than I see boys married with babies. And I also believe more in the relationship between mother and child than in that between father and child.”