It’s been more than 12 years since model-turned-host Tyra Banks first launched the image obsessed juggernaut, America’s Next Top Model. The show arguably popularized the very secret, often painful world of couture fashion models. And while some contestants were privately hot messes, they were all thin, fair-featured exemplars of an industry’s surreal beauty standard.

Designers and fashion executives are well aware that their models aren’t representative of the people who may actually wear their clothing. It seems obvious without saying, but a model’s job is to showcase design and present the stylistic point of view of a designer. Oh, and also to sell clothes. 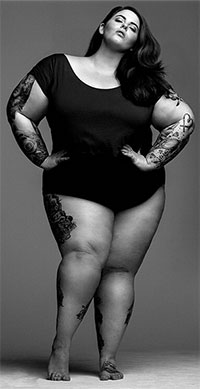 The call for diversity in fashion plates is nothing new. Fashion house United Colors of Benetton is notorious for its ad campaigns that feature all races and such shocking images such as death row inmates, amputees, and HIV positive models. And while these images are powerful representations of global realities, they remain in the realm of minority politics.

But consider that we now live in a country where two-thirds of all adults are obese or overweight. The thin models that are fashion’s go-to body type may serve as some particular fashion fantasy, but they don’t even accurately display what clothes will look like on full figures.

Australian supermodel Tess Holliday hopes that her burgeoning career may be a sign of much needed change. The Australian beauty is signed to MiLK Model Management, is featured on the cover of People magazine, and wears a size 22. Her hashtag #effyourbeautystandards is the call of a one-woman revolution with more than 700,000 Instagram followers.

Holliday told People magazine: “The whole reason I do this is to show women that you can be beautiful regardless of your size. You are allowed to dress how you want without feeling ashamed of your body.”

But weight variation isn’t the only difference that models crave on runways. Between 1979 and 2003, the number of babies born with Down syndrome increased by about 30 percent. This approximates to one in every 700 babies that aren’t currently represented by consumer culture. Additionally, people living with Down syndrome are having longer, more integrated lives. Life expectancy for people with Down syndrome has increased dramatically in recent decades – from 25 years in 1983 to 60 years today. This improvement creates a new market that the fashion industry is just now exploring. 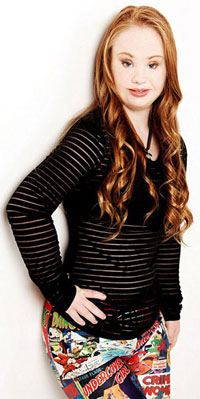 In 2012, a swimwear catalogue cover featured Velentina Guerrero — a 10-month-old with Down syndrome. Earlier that same year, six year old model with Down syndrome Ryan Langston appeared in ads for Nordstrom and Target.

It’s easy enough to turn your child into a prop for corporate America, but 18-year-old Madeline Stuart is offering herself as a Down syndrome model with a purpose. Madeline has been aggressively promoting herself on social media in hopes of attracting work in print ads and on catwalks. Her chromosomal difference doesn’t exempt her from the industry’s weight obsession – she admits to losing more than 40 pounds before she felt comfortable launching her bid for stardom. Stuart toned her figure by swimming five times a week and practicing with the Special Olympics in Australia.

Since then, Stuart has been hired by Australian geek-wear brand Living Dead that, contrary to the current state of their blonde-centric product shots, claims a commitment to hiring models of varying body types. She’s also found notoriety as a feel-good topic on major news outlets including ABC and NBC.

While an outpouring of social networking support is encouraging and may suggest that fashionistas are keen for models with difference, the world’s couture houses aren’t running charities and the trend may meet an indecorous end if goodwill doesn’t translate to cold, hard sales.

6 Sexy Gay Video Games Designed to Get You All Hot and Bothered
These Hornet Users Had Our Favorite Posts of the Past Week
A List of 25 People, Products and Companies American Conservatives Have Tried to 'Cancel'
Our Roundup of Films Where Bisexuals Aren't Portrayed as Villainous, Confused Creeps
English