Fox News’ political Twitter account, @foxnewspolitics, reported that President Barack Obama had been assassinated on Monday, July 4 in a series of six tweets. (He wasn’t.) 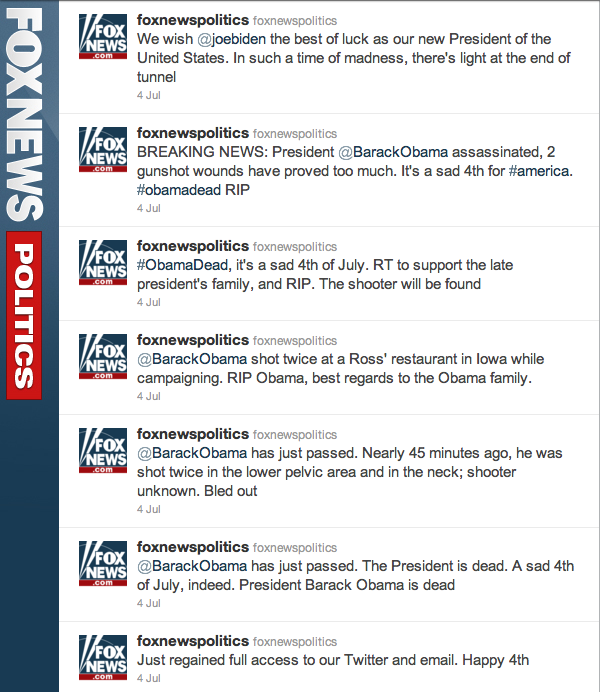 The screenshot above was taken at 8:45 Eastern on July 5. Fox is claiming they were hacked in a more recent tweet, but for some reason the company has NOT deleted the horrendously inappropriate tweets even after gaining control over their account once more.

The Secret Service refused to comment on the situation, but Fox insists there will be an investigation into the hacking. But who will be doing the investigating? There’s been a long list lately of wrongdoers falsely claiming they were hacked to cover up terrible mistakes. Just ask Soulja Boy, Anthony Weiner and James Franco – although in Franco’s defense, we quite enjoyed his twitter mystery.

Just who will be looking into Fox News’ Twitter hoax?

Radical Faeries Have Been Pushing Queer Boundaries for More Than 40 Years
We're Loving the Work of These Gay Embroidery Artists
July Is Disability Pride Month. Here Are Some Resources for Self-Education.
The Cockettes: Remembering a Legacy of Glitter Beards and Daring Drag
English