For the first time ever, documents from the gay rights movement are on the display at the Library of Congress in Washington, DC, as part of an exhibition on the United States’ constitutional history and civil rights protections.

The documents come from Frank Kameny, the original LGBT rights activist, who was fired from his job as a government astronomer in 1957 because he was gay. He contested his firing all the way up to the Supreme Court, and the Library is showing his actual petition to the Court he submitted back in 1961. Kameny called his firing an “affront to human dignity.”

Though the petition was denied, it was the groundbreaking first attempt to petition the Supreme Court for a rights violation based on sexual orientation.

Charles Francis, a founder of the Kameny Papers Project, told The Associated Press, “This inclusion is an epic milestone in the telling of gay history because it places gay Americans’ struggle for equality where it belongs — in the story of the Constitution itself.”

Kameny continued to be a champion for gay rights, protesting in front of the White House and the Pentagon, mobilizing others with signs like “Homosexuals Ask for the Right to the Pursuit of Happiness,” and successfully petitioning the American Psychiatric Association that gays and lesbians should not be classified as mentally ill. 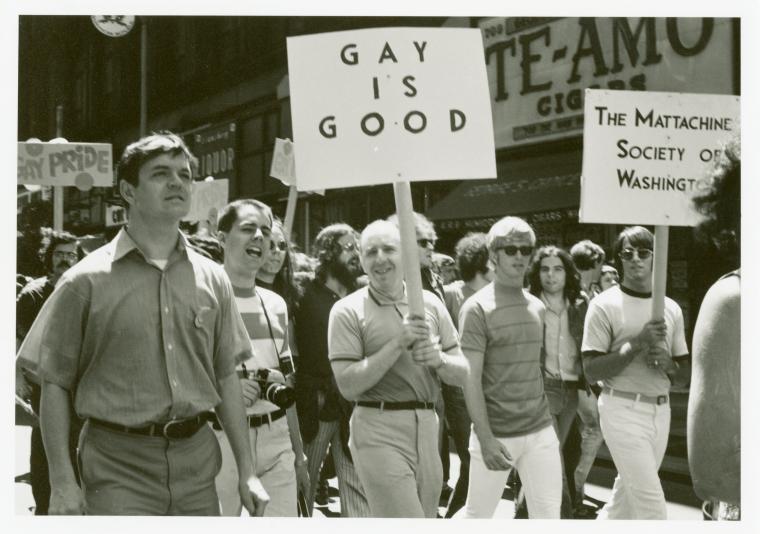 Other documents in the exhibition include a letter from 1966, from the head of the US Civil Service commission under President Johnson, that justified Kameny’s dismissal because of the “revulsion of other employees.” And yet, in many states, gays can still be fired for any pretense – including the revulsion of others. We have a long way to go, but my oh my how far we’ve already come.

Kameny, now 85 years old, also has special importance to Unicorn Booty. He came up with the first pro-gay slogan, “Gay is good,” which we have added as the tagline to our gay blog.

We were not aware of this until after we chose it, however. Kevin and I just thought that “Gay is good” had a particularly awesome ring to it, a simplicity that is easy to digest and quite powerful. When I came across the Kameny Papers several months later, I was impressed by his dedication, intelligence and general bad-assness.

So we salute you, Frank Kameny, and if we can get to DC to check out this landmark exhibit, we will do so in a hearbeat. Thank you for standing up and doing your part to make the United States of today remarkable more safe and free for gays like  me.

George Quaintance Is the Predecessor of Legendary Gay Artists Like Tom of Finland
New Study: Most Queer Gen Z Guys Are Actually 'Out' to Their Parents
Meet the Biggest Donor in History for Expanding LGBTQ Rights in America
25 Essential Drag Queen Films Every 'Drag Race' Fan Needs to See
English