Life seemed pretty damned glamorous for Kevin Sessums. He had once worked as an executive editor of Andy Warhol’s Interview magazine and now had a six-figure salary in the 1990’s working as a star writer for Vanity Fair. He regularly rubbed noses with New York’s famous and artistic elite and had a 2,000-square-foot loft in Lower Manhattan.

You couldn’t call him just a journalist though, he was Hollywood insider; he smoked a spliff with Heath Ledger in Prague, he considered Jessica Lange, Madonna, and Courtney Love his ‘three blonde muses’, and he once fiddled with a box of Kurt Cobain’s pubic hair whilst dawdling around Courtney Love’s house. In fact, Sessums saw both of Kurt and Courtney’s pubic hair that night, as Love took a bath naked during their interview — just another day on the job for Sessums.

He lived a lavish life: flying east to west coast to greet and party with his interviewees, like he did with Quentin Tarantino, John Travolta, and Sharon Stone during the Pulp Fiction event he attended in 1995. That same year he spent his 49th birthday as Jessica Lange’s date at an Oscar party — on the ride home in her limo, he jokingly held her Best Actress award between his legs like a golden, man-shaped cock, much to the disdain of her publicist.

It was all glamorous, ‘tacky glamour’ Sessums called it; until the excessive partying, late-night booty calls from an assload of prostitutes and a crystal meth addiction consumed him. ‘Cocaine came first, then the whores.’ It was only a matter of time until he crashed.

By early 2012, he was depleted; he’d contracted HIV, was ruining his health with drugs and going broke. He’d spent all of his savings, leaving him homeless in New York City and unable to take care of his two dogs. “When you can’t take care of your dogs you know you’re in trouble,” Sessums told Unicorn Booty.

Now aged 59, Sessums has just finished a two year stint as editor of San Francisco’s LGBT magazine FourTwoNine. He’s a happy and changed man: sober and “with no desire for recreational sex just to fuck.” He doesn’t go to bars, he’s not on Grindr; instead, he prefers to go for walks, ride his bike, go out with his dogs.
He carries in his pocket a mini-statue of the elephant-headed Hindu God, Ganesh as a daily reminder of his spirituality and sobriety. His current lifestyle that is worlds away from what his NYC days offered him. 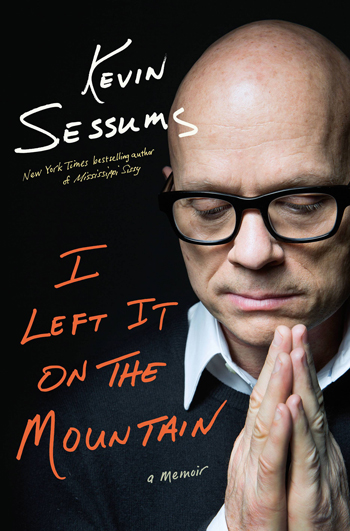 The thing is, by 1995 Sessums had found himself in a familiar milieu of celebrities, drugs and sex, constantly battling his animalistic side to fuck it all and give in. He’d see hot guys walking down the street, and find himself staring at the veins in their arms, fantasizing about shooting up with them. He sexualized everything and everyone, sometimes he’d just thoughtlessly scribble down words like ‘pussy’, ‘dick’, ‘fuck’ on pieces of paper. One day, actor Michael J. Fox happened to find one such piece of paper after their interview and confronted him about: ‘It was a litany for a word association game,’ laughed Fox. Humiliated, Sessums downed the rest of his vodka.

Sessums’ drug of choice was inhaling crystal meth with some pretty gay whore he’d found through the Manhunt hook-up site; he preferred the young-looking ones with concave cheeks, the ones who knew thought nothing of being naked. One ended up raping him; ramming pieces of crystal meth up his ass while he lay on his bed passed out. Tweaked out on meth, Sessums forgot about everything, his senses totally burned away.

Sessums would binge into the early hours of the morning before meeting his interview subjects. The night before interviewing actor Daniel Radcliffe for The Daily Beast, he fucked his brains out while inhaling the narcotics deep into his lungs, doped into delirium.

The destructive behavior went on for years. One could ask how he managed to keep such a high profile job in this mental and physical state, but it was just routine for him at this point. He’d try to obliterate his night-long drug and sex binges with his ritual of a shower, a protein shake, a banana, three cups of coffee, yogurt, Gatorade, downing liters of water, brushing his teeth, and using a trusty bottle of Visine to hide his red tell-tale eyes. 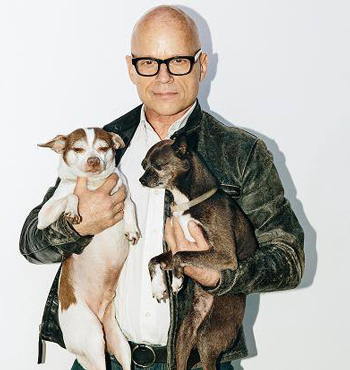 Sessums finally admitted that he was a full-blown drug addict to the ones he felt closest to: Archie and Teddy, his two terrier and chihuahua mixes. By late 2010, he’d become a regular intravenous user and customer to the whores that supplied him, mastering the art of concealing it to everyone, even his boss. With a makeup stick he’d blot out the track mark on his arm, the marks that have since left him with a scar.

By December 2011, Sessums’ life had hit a fundamental low point: he’d become a ‘homeless, poverty-stricken, desperate meth addict’ struggling on food stamps. Friends wouldn’t even let him stay anymore. One had to throw him out of his Provincetown apartment where he’d offered Sessums a spare bed, for fear of him dying inside. Sadly, Sessums saw suicide as a rational solution to his predicament. He had overdosed at his friends’ apartment after a 6-month sobriety stint, lying in bed awake for four days straight, hallucinating, his dogs’ incomprehensible cries trying to save him. Sessums described the overdose as a near-death experience — it’s a part of his book he has a hard time reading, even now.

What ultimately crushed him though, was seeing his dogs’ confused and sad faces, barking and crying when he left them in foster care to go clean himself up. “This is killing me,” he said to a friend. And that was Sessums moment of surrender; December 22, 2011: the day he walked into rehab at the LGBT Center in New York City.

At the funeral of his dear friend Perry Moore — an author and Hollywood screenwriter who passed away from a drug overdose in February of 2011 — Sessums made a promise of sobriety in his prayers. He and Moore had met at an NYC party back in 1995. They hit it off instantly through their familiar formative years, southern boys trying to incorporate their stiff religious upbringing into their new lives as gay New Yorkers. They had formed ‘a kind of older brother/younger brother mentorship relationship.’ Sesames dedicated his memoir to Perry.

Sessums had also made a pledge of sobriety to Brandon, a young boy whom he’d been mentoring since 1996. He’d met Brandon through the “buddy program” of a social services volunteer organization called The Family Center, believing that the only way to heal himself was to mentor someone else. The relationship began as a narcissistic one in the midst of Sessums drug addiction, but over time he and Brandon developed a genuine, hard-earned love for one another. They hung out doing all the things a father and son would do: going to the movies, playing basketball, riding bikes.

“It helps to have someone else to focus on,” says Sessums. “I used to be that person who’d volunteer so you would think of me as that person who volunteers. I have learned in sobriety how to be of service in a more selfless way. Service keeps me sober.”

Sessums hopes that those struggling with similar drug or sex addiction and those looking for a common goal of self-acceptance in life will relate to his story and realize what he has learned, “There’s hope. It’s a presence,” Sessums says. “It awaits you.”

After his near-fatal drug overdose, where he describes meeting the devil, and being taken by the satanic Lucifer, Sessums now calls sobriety his empyrean, his heaven.

It was December of 2012: he had only $1.23 in his bank account, but was six months sober. He’d gotten his dogs back from foster care in Provincetown. He received a few writing offers out of the blue, one for Country Living magazine, interviewing actor Corbin Bernson, and the other a cover story on Mary J. Blige for LA Confidential magazine.

He had forgiven himself.

Sessums’ took a climb up the highest mountain in Africa, Mount Kilimanjaro, and made a pilgrimage through the ancient Camino de Santiago in Northwestern Spain to find the self-acceptance he so desired. It reminded himself of his ability to be a disciplined person and erased the diagnosis he felt had previously defined him. “The Camino replaced HIV,” he says. “It replaced it in some deeper stream I can’t quite name. Some might call it my soul.”

Looking back on his glitzy, hedonistic lifestyle, Sessums eschews repentance, instead adopting a graceful, humble outlook for his future.

“The high points of my life – funny you should use the word “high” – are about not being high. Simple things. A walk alone in this beautiful city and exploring its neighborhoods means a lot to me now,” Sessums tells Unicorn Booty. 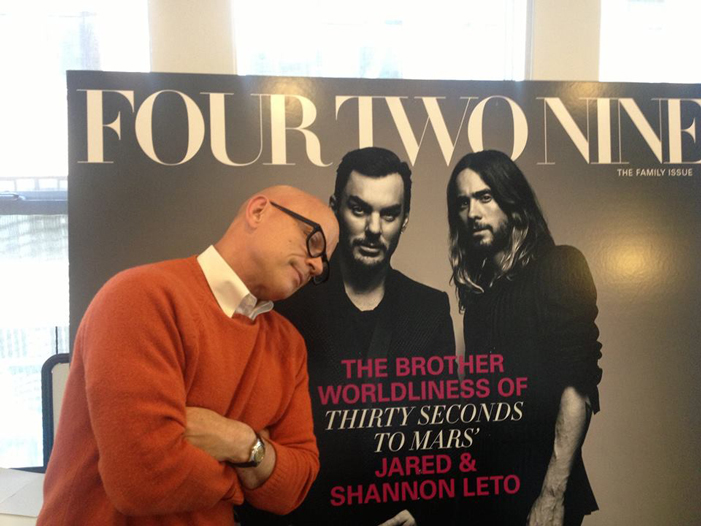 His life at San Francisco’s FourTwoNine magazine gave Sessums a kind of freedom he never had at Vanity Fair. He had ended his time at Vanity Fair due to stylistic differences when American journalist Graydon Carter took over as editor. Sessums says, “I had become to them the tacky reflection of their glamorously serious selves that they hated facing.” When he left, he had 27 successful Vanity Fair cover stories to his name.

His journalistic career now may come without a fancy car and invitations to celebrity Oscar parties, but for him it’s no less rewarding. Coincidentally, Sessums feels sometimes that he’s a dinosaur in a dying business though.

He also tells me, he’s just finished reading the poem, “When I Have Fears” by John Keats, whom he calls a comfort numerous times throughout his memoir.

The poem is Keats’ personal confession, the fear of an early death, dying before completing the writings that he is capable of:

… Of the wide world I stand alone, and think
Till love and fame to nothingness do sink”

Sessums thinks the future of journalism, with the decline of print and advent of digital media, will make print even more expensive — physical magazines will become a self-indulgent and tactile experience, physically touching and turning glossy-printed pages will one day become a luxury.

“I think more and more magazines might be corporately produced with just one advertiser footing the bill,” Sessums predicts. “Lifestyle stories and features will stand on their own and yet be subtly part of a brand as well.”

Whether this change takes place or not, he’s keeping his head above the tar pit at this point, and taking it all just like his sobriety, one day at a time.

He remains proud of his mentorship efforts and continues his friendship with Brandon, whom he’s seen grow from a young boy of six to an eighteen-year-old now attending college in Manhattan. Sessums still enjoys success as a writer — his first memoir, Mississippi Sissy was a New York Times best seller — and he had the freedom at FourTwoNine to be candid with his celebrity profiles such as he did in the profile ‘Straight James Franco talks to the Gay James Franco’.

Sessums is confident that every generation has a responsibility to pass on its knowledge and help others. “All mentors mentor themselves eventually” he says, and that salvation lies in learning how to be honest with yourself. His journey to sobriety has given him a deeper appreciation and meaning for life.

“Some days,” Sessums says, “just being the man who is responsible enough to pick up his dog’s shit and care for them is highlight enough for me.”

These Hornet Users Had Our Favorite #MySecretCity Posts
Queer People Like Hockey, Too. But Is the NHL Doing Enough to Welcome Us?
Well, We Found the Bizarre and Dangerous Intersection of White Supremacy and 'My Little Pony'
Madonna Says She #DidItFirst in Response to Lil Nas X's BET Makeout Sesh, Gets Slammed Online
English