Meet Gabriel Fontana, the Brazilian Kid Who Went From Living in Slums to Being a Swedish Pop Star

Gabriel Fontana grew up in violent, crime-ridden Brazilian ghettos before escaping to Sweden, where he rose to pop stardom as the winner of a Swedish Idol spinoff. Despite being in his mid-20s, Gabriel’s done an incredible amount of living, and it was my honor to interview him recently on my podcast, The Sewers of Paris.

Gabriel’s always been something of an escape artist, relying on a mix of hard work, talent, and love to pull himself out of places he didn’t want to be. Now, with thousands of fans following his every move, he’s feeling more intoxicating adoration than ever before in his life — and an ever-growing impulse to pursue that attention wherever it calls him.

His story started in Brazil, where he lived in poverty in a favela, a Brazilian shantytown. An effeminate child, he learned from an early age people objected to his worship of divas like Britney Spears. He was abused for his girlish manner, beaten and victimized by people around him.

But he was laser-focused on getting out. With his mother’s help, he was able to secure a scholarship to a school across the country. Even then, his family was skeptical of his ability to rise above. They thought that he was leaving home to become a sex worker.

It was there at his new school that he learned to be an artist and performer, and to use his talents for good. He organized a group of students to venture into low-income neighborhoods and do arts education for disadvantaged residents. Even there, he was shocked by what he saw — crime was rampant and murder common. On one occasion, he saw pigs used to dispose of the bodies of people killed in gang violence. 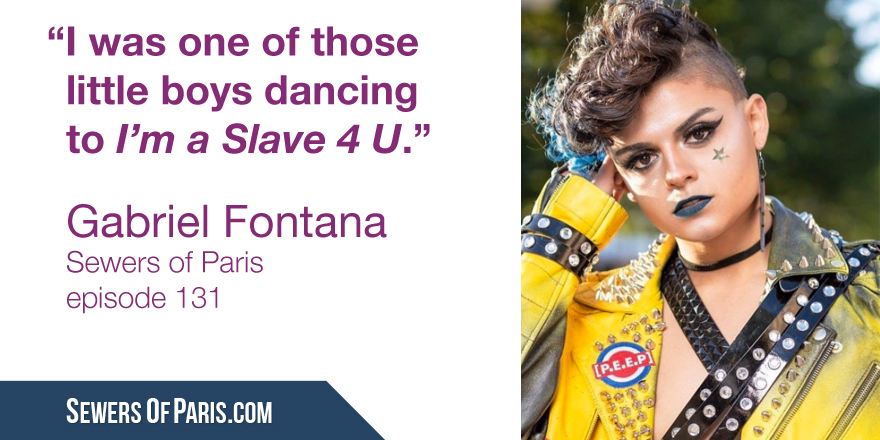 Gabriel knew he needed to leave, and as luck would have it, he met a Swedish man on Instagram with the resources to move him abroad. They fell in love and married, with Gabriel traveling across the world to be with his new partner.

Now in a position of relative safety in Sweden, Gabriel found himself able to pursue performing like he was never able to before. He auditioned for the Swedish version of Idol, and was accepted — but cut early in the process. Still, he was invited back for a spinoff series, and that time he won.

That victory changed Gabriel’s life. Immediately afterwards, he got a manager and the two set to work, crafting an image and music for him. Gabriel was inspired by the sexy dancers who appealed to him in his youth, and modeled his singing and dancing on Britney. Before long, he was ready to release a single entitled “Electric,” and is now touring Europe and preparing to release an entire album.

interviews The Sewers of Paris

Meth: Why Is It So Alluring to So Many Queer Men?
Read Martin Luther King Jr.'s Advice to a Closeted Teen
From 1860s Drag Balls to Bricks at Stonewall: Unpacking the History of the Term 'Coming Out'
78 Years of Batman On-Screen: How the Caped Crusader Has Evolved Through the Years
English