The creators of an anti-bigotry comedy website called FreeRedditCheck were forced to pull their site down in response to alleged threats and harassment from members of Reddit and GamerGate.

During its short, glorious lifespan, FreeRedditCheck was a tool designed to poke fun at Reddit users’ infamous toxicity. FreeRedditCheck worked by scanning a Reddit user’s posting history for activity in subreddits (communities) the tool classified as bigoted, as well as posts containing keywords like racial slurs or homophobic insults. FreeRedditCheck would then assign a user a score based on the results of that scan, along with an assessment of the Redditor’s particular breed of bigotry.

Here’s what a few Twitter users found when they used FreeRedditCheck:

@the_old_heresy Also considers “the jews” to be a slur. pic.twitter.com/LpXq2ZXi34 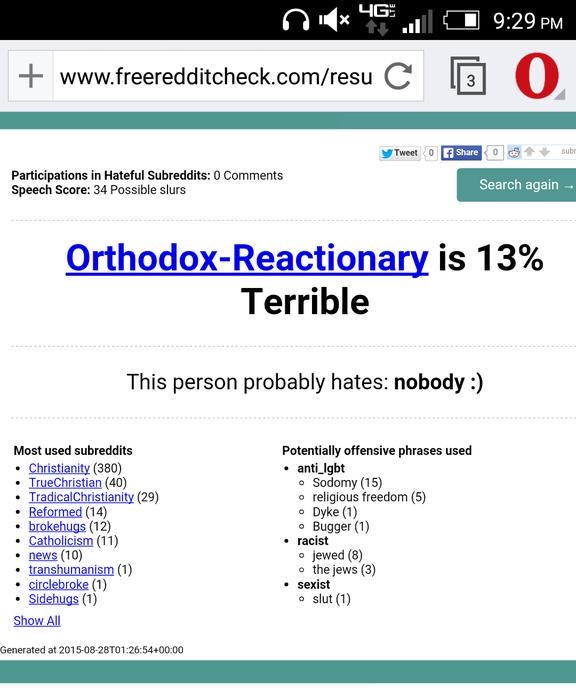 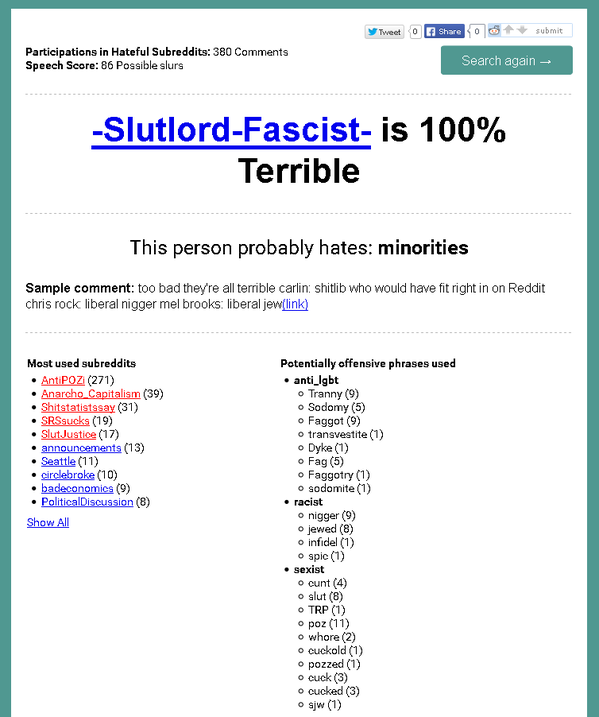 FreeRedditCheck had its flaws. It was a little blunt. Unable to judge a word’s context, FreeRedditCheck could give a Reddit user an inappropriately high score for using the keywords in posts meant to criticize prejudice. Still, it was a website meant mainly to poke fun at the problem of internet bigotry in a lighthearted, clever way.

FreeRedditCheck attracted a great deal of attention during its short run. It won Comedy Hack Day 9, a conference that mixes comedians, software developers and a lot of whiskey to compete in humor and computer programming. Motherboard wrote about the website, as did Engagdet and Fast Company. But now, alas, FreeRedditCheck is gone. This is what you’ll find if you visit the website:

Yes, a GamerGate-affiliated blogger named Matthew Hopkins took offense at FreeRedditCheck and urged his followers to Tweet their displeasure to the site’s creator and his boss and hurt the company’s rating on WordPress. As a result, Fast Company reports, one of the creators of FreeRedditCheck allegedly received “a lot of personal threats” and now the website is down.

Why would GamerGaters object to FreeRedditReport? According to Hopkins, it was because the tool classified GamerGate subreddit r/kotakuinaction as a hate community and included the names of several prominent GamerGate supporters among key words in the “misogyny” category. Hopkins was also upset that FreeRedditReport gave him a bad grade and told him he probably hates women. 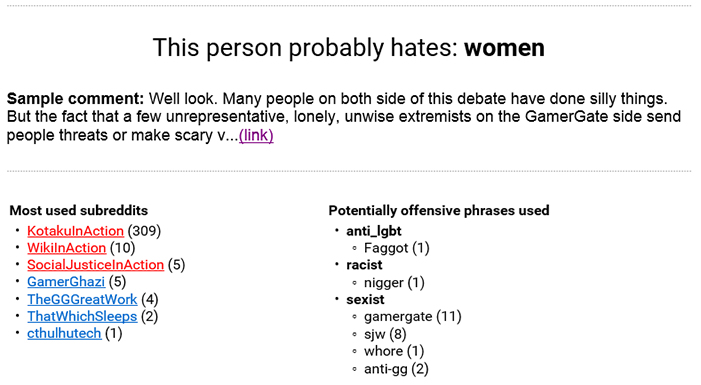 According to Hopkins, he had only used the terms ‘nigger’ and ‘faggot’ while quoting the hate speech of someone else who had first used the slurs.

Nevertheless, there are reasons to classify r/KotakuInAction as a hate community beyond its affiliation with the harassment campaign GamerGate. The subreddit isn’t only full of misogynists; it’s full of racists, too. Before Reddit’s ultra-racist community r/CoonTown was finally banned, an analysis of its users found that there was a lot of overlap between r/CoonTown and r/KotakuInAction. The two communities shared many active members.

Whether FreeRedditReport will return or whether it will be lost to the digital ether forever, we cannot say. One thing is for certain: if Redditors and GamerGaters did indeed choose to respond to its existence with threats and harassment, they will have shown the world once again that they are 100 percent terrible.

EDITOR’S NOTE: An earlier version of this article mistakenly attributed a FreeRedditReport image as reflecting the activity of Matthew Hopkins. The image has been replaced with the correct one. We have also changed earlier mention of death threats to ‘alleged threats.’

7 Important Facts About Gay and Bi Men Who Suffer From Eating Disorders
Way Before the Age of Social Media, Cuddle Parties Dominated Hookup Culture
This Artist Is Giving Us The Sexy Pokémon Trainers We Never Knew We Needed
This Artist Has Redrawn Snow White's Seven Dwarfs as Drool-Worthy Pin-Ups
English