Written by Matt Keeley on September 29, 2015
Be first to like this.

Yesterday, on Reddit, an anonymous commenter using the name “redthrowaway96” posted to r/askgaybros whether or not he’d been raped at a party:

I went to a party this weekend with two friends that turned out to be pretty gay (the party, not the friends – my female friends left early). There was a mixed crowd including some hot straight girls, but as the night wore on, it became clear it was mostly gay men staying on. I took some E with my friend earlier in the night, but it didn’t really seem to kick in. My friend introduced me to the host and I made arrangements to crash in his roommate’s loft so I could drink a bit more. I’m pretty open-minded, so being around the gay guys didn’t bother me. The host and his friends were really nice and seemed like they knew how to party. I was actually having a great time and getting really hammered. I remember several guys bringing me drinks and smoking some pot while naked in the hot tub. Everything after the hot tub is a blur. I don’t generally black-out drink (I always remember when drunk), so I am thinking maybe someone spiked my drink with something or I just had too many different things in my system.

Anyway, I remember some guy saying that after that night I wouldn’t be able to call myself straight anymore. I was kind of pissed off at him for saying that and confronted him. He mentioned that he saw me giving someone a BJ in the bathroom and to chill the fuck out. I kind of panicked at hearing that and went back to the bedroom I would be staying in to lay down. I remember coming to with several guys in bed with me and naked. As far as I can tell, they were all just talking with each other or about me.

I have another memory of two guys fighting (I think one actually threw a punch). I seem to remember one guy was telling the other that he should leave me alone and that I was too wasted to fuck. The guy standing up for me (?) wasn’t around when I came to later that night, but I distinctly remember the other guy doing something to my ass. I’m honestly not sure if he fucked me, but something definitely happened. I recall liking how it felt, but that might have been the E talking.

I woke up the next day nude with the mother of all headaches. My female friends came back to pick my sorry ass up and I told them about what happened. They completely lost their shit and are saying I was raped. They are really on me to go to the cops or therapy or some shit. I feel like saying I was raped is taking it a bit too far. From what I (barely) remember, at least some of the activities were enjoyable. I honestly do not remember if I gave consent or not. It’s tripping me out that I would have given a guy a BJ without remembering, but when I think about it I’m not as mad as I feel like I should be. The girls were majorly tripping over me mentioning something with my ass and want me to get a rape kit. 1) I’ve already showered 2) I have at least a brief memory of liking what happened 3) I very well may have said yes to that guy 4) there was a big fucking bowl of condoms at that party and the guys were pretty upfront about grabbing handfuls of the fuckers. I don’t feel like they would have done something to me without protection (I hope?).

The story’s been going around the gay blogosphere, and a common thread is victim blaming. From the Gayly Grind’s comment thread: 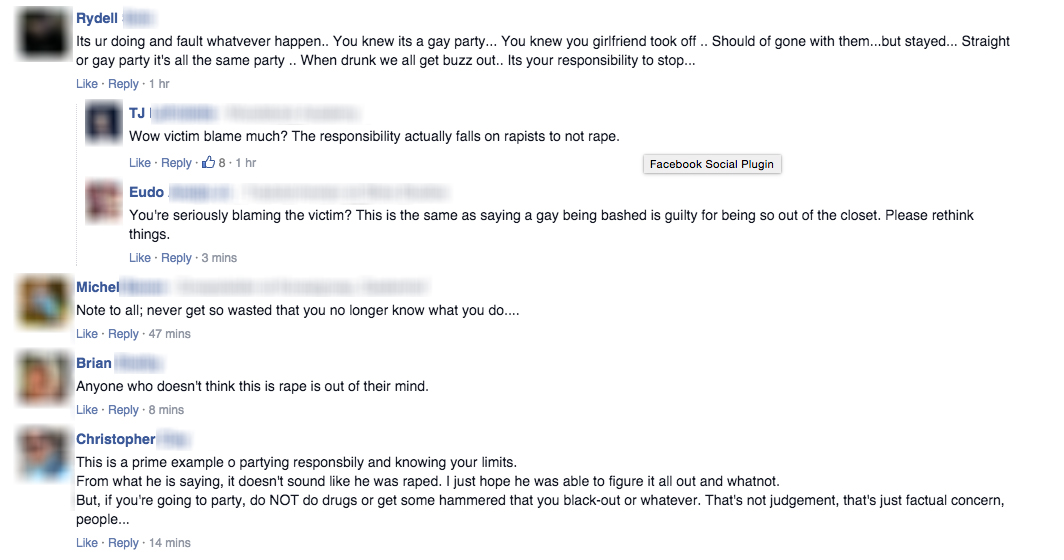 There are some callouts on blaming the victim, but of the four parent comments, three of them blame the guy for what happened. It’s worse on the Gaily Grind’s Facebook posting of their article: 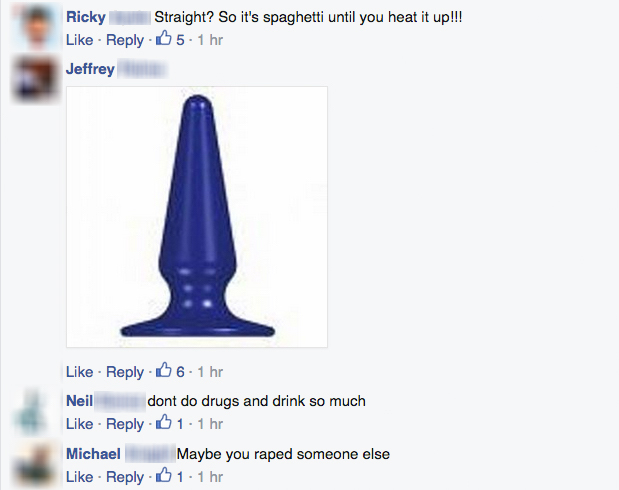 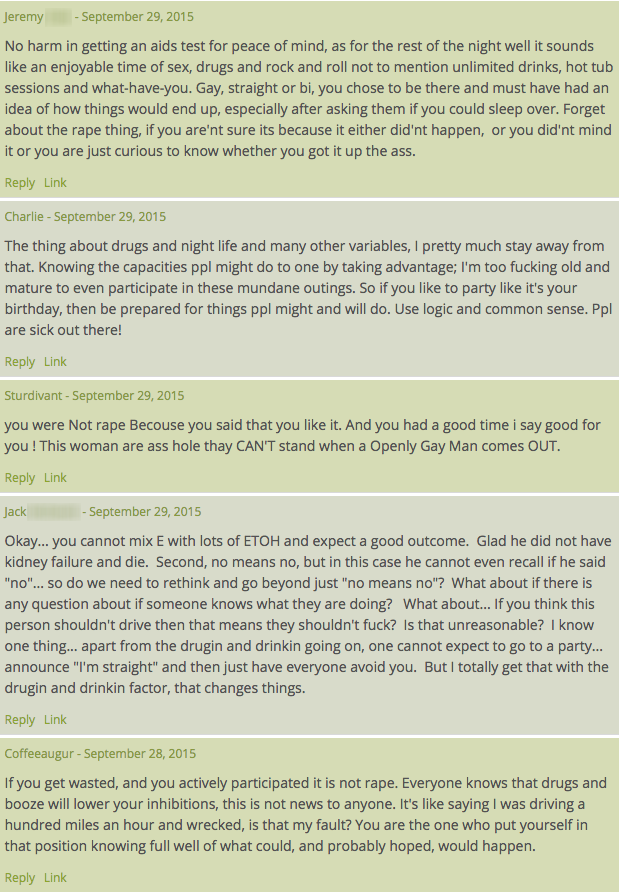 To a woman reading these comments, it might sound all-too-familiar. “You shouldn’t have gotten drunk.” “You should have been more careful.” “You shouldn’t have been there.” “You should have worn something different.” These are all common phrases told to someone who’s been raped; assuming that it’s somehow their fault. But as Dr. Freda Adler said in her 1975 book Sisters In Crime, “Rape is the only crime in which the victim becomes the accused and, in reality, it is she who must prove her good reputation, her mental soundness, and her impeccable propriety.” And that’s true for men, too. Brown University states that one out of ten men is a victim of rape.

There’s No Easy Path to Asylum, But It’s Even More Difficult for Queer People
In 1933, Nazis Quickly Declared a 'National Emergency' Then Tortured and Murdered Queer People
This 'Sailor Moon' Fan Doesn't Care He Loses Followers by Posting His Drag Cosplay
It's Now Easier Than Ever to Create a Fan Base and Monetize Posts on Hornet
English