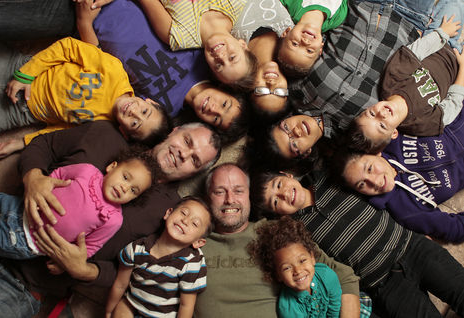 Meet The Hams. Gay blog royalty Steven and Roger Ham are the proud parents of twelve children, all adopted out of foster care in Arizona, even though neither same-sex marriage nor adoption is legal in the state.

So how did they do it?

Steven called a number of Valley adoption agencies to find out whether they considered same-sex couples for placement.

“Honestly, if I needed to lie and say I was a single parent, I would have,” Steven says. But he didn’t have to. Of the half-dozen agencies he contacted, only two showed any hesitation.

That is because although the Legislature has produced bills that would have kept single people from becoming foster or adoptive parents, prohibited same-sex marriage and given preference to married couples in adoptions, those who work with children who need homes – social workers, agencies, the courts – do not take issue with those same conditions. They are more concerned about the thousands of children taken from homes each year, who then bounce among foster homes and group homes in alarming numbers.

The Arizona Department of Economic Security, which licenses foster and adoptive parents, cannot discriminate based on sexual orientation.

State child-welfare officials learned to trust and rely on the Hams, bringing them 42 foster children over 10 years. Some needed shelter for a few days; others stayed for months. Child caseworkers knew the men would take in any child, day or night, no questions asked, and treat them as their own. And in the Hams’ home, children were never sent back for doing something wrong, and it didn’t matter that they were not all the same color, or had special needs.

Ten of the Hams’ children are adopted from Arizona, two from Washington state. Both dads’ names appear on the birth certificates of the two from Washington. But legally, the 10 children adopted in Arizona belong only to Steven. Arizona does not allow same-sex couples to adopt, or for a same-sex partner to adopt a partner’s children.

Roger jokes that if he ever leaves, he’ll take his two kids with him. Very funny, Steven counters: “If you ever leave me, we split the kids down the middle – and I get to pick.” They grin at each other.

Because they can’t co-adopt, a rather complicated series of legal actions had to be put together to cover all circumstances. Roger legally changed his last name to Ham in 2007, so everyone has the same name and there was less explaining to do when he picked up the kids from school or took them to the doctor.

An attorney drew up papers that, in case something happened to either dad, guardianship of the children goes to the other. Medical releases ensure that either dad can take the kids to urgent care, and paperwork filed at school means either can pick the kids up.

I highly recommend the rest of this inspiring article from AZ Central. It’s a fascinating read, and clocks in way longer than we are able to copy and paste into our own coverage here. You can read the rest HERE. And you should. These kids adore their fathers!

The Ham family has officially made my day. We LOVE to see stories like this.

Do you plan on becoming a parent one day? Are you already one? Do tell!

As an HIV-Positive Man, These Are the 5 Questions I'm Asked Most Often About Dating
This Week We're Swooning Hard Over 'The Batman' Star Zoë Kravitz
Read This Homophobic 1969 News Article About the Stonewall Riots
Semen Exchange During Sex Can Make You Less Depressed, According to Survey
English