Georgia Wants Their Own Version Of Indiana’s Anti-LGBT Law. Here’s How To Stop Them…

Written by Daniel Villarreal on March 28, 2015
Be first to like this.

Remember that awful “religious freedom” law that Indiana just passed — the one that allows people to discriminate against LGBT folks? Yeah, well Georgia is considering passing their own version. 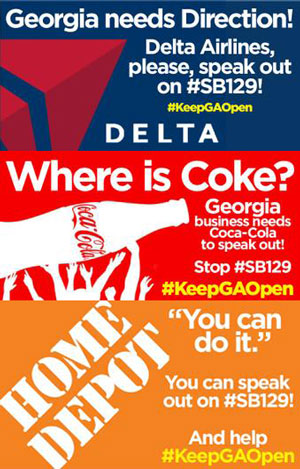 “The bill is tabled, but many times we see that is merely code for lying in wait,” Scott Wooledge, the activist behind StopSB129.com, told Unicorn Booty. “We know the people with an agenda to hurt LGBT Georgians will not give up easily. There is still a week in the session they can use to regroup and return. Now is not the time to rest on our laurels.”

That’s why Wooledge is asking folks to pressure Coca-Cola, Home Depot, and Delta — all companies headquartered in Georgia — to speak out against the bill; he’s even added social media tools on his site’s front page to make pressuring the companies easy. All three businesses spoke out against the bill when it came up during the 2014 legislative session, but they have yet to mention it in its newest incarnation.

Remember, big businesses didn’t speak out against Indiana’s “religious freedom” bill until it was already on the Governor’s desk, so applying pressure is more important now than ever. Luckily, several Georgia conferences have already written the legislatures saying that the state stands to lose $15 million if they pass the bill.