Written by Kevin Farrell on March 2, 2011
Be first to like this. 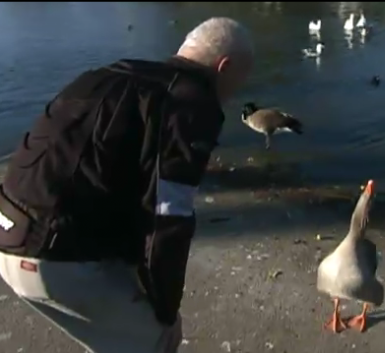 Maria, Maria, you’re making a mockery of the LGBT community’s fight for marriage equality! Your fiery passion and deep commitment to your mate is the stuff anti-gay legislators dream of! The old excuse about same-sex marriage being a precursor for legal unions with animals – Maria, you’re setting our entire movement back years! Ha!

A Los Angeles retired salesman named Dominic Ehrler has formed an unlikely companionship with a Toulouse Goose he named Maria in Echo Park. Maria sits by the street curb each day waiting for Dominic to arrive on his red scooter. She goes positively ducky when she hears him approaching.

Maria is territorial of her man, and has banned other geese from approaching Dominic. Dogs aren’t on the guest list either. Maria runs a tight ship! Dominic doesn’t feed her, and remains unsure what his goosey gal saw in him in the first place.

“They walk around the park together like they’re in love,” said one park-goer. “It’s wonderful.”

“People would look at us like – what is this?” Ehrler said.

“What, they’ve never seen a guy walking with a goose before?” Hartman said.

It all started about 10 months ago when Maria simply started following Dominic. He wasn’t feeding her. He wasn’t coaxing her. He was just one of probably a thousand people who walk around the lake every day. But there was something about his waddle that did it for Maria and she’s been smitten ever since.

“She thinks that she owns me,” Ehrler said. “The other geese are not allowed to be near me on account of Maria.”

It’s not just other geese. Maria doesn’t want any species stealing her man.

“I’ve seen her go up and scare the heck out of pit bulls,” Ehrler said. “Maria, be nice, don’t bite the dog.”

Adorable! Since the two bonded, Dominic has stopped eating poultry and has a new found respect and admiration for the intelligence of birds.

17 Stories of Straight Guys' Gayest Moments Ever, Ranked by Hilarity
Elska's New Issue Shares the Bodies and Voice of Queer São Paulo, Brazil
Here Are the Facts About Student Loan Debt in the LGBTQ Community
Nearly 1.2 Million People in the United States Are Nonbinary Adults
English