Written by Booty The Unicorn on January 23, 2011
Be first to like this. 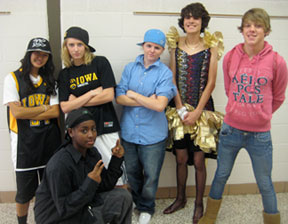 Grades from kindergarten to eighth were set to voluntarily participate – no child was being forced to dress as the opposite gender if they didn’t want to – and the event was meant to be in good fun. “They discussed the fun that the day might generate, plus how the experience might help boys and girls understand a bit more what what it felt like to be a member of the opposite sex…That was the plan,” said Ross Virgo, of the York Region District School Board.

We’re of two minds about this. On one hand, the event was clearly organized with the intention to create awareness about how the other half lives, which should be applauded. On the other, there are trans students, students just beginning settling into their gender, and students wrestling with their sexual orientation across the entire gamut of K-8. This sort of event could be absolute hell for someone already facing bullying for not fitting gender norms on a day to day basis. Let’s face it, middle school is awkward for the majority of us. Would an event like this unfairly point out kids who are having a harder time already than others?

We’re curious about what you think about Opposite Gender Day. Were parents correct to be concerned, or would the student body have benefited from walking a day in someone else’s shoes?

10 Styles From the '90s That Definitely Deserve a Comeback
LEGO's 'Everyone Is Awesome' Pride Set Has Proven That Everyone Is Not So Awesome
A Short History of the Bidet, and Why They're Just Not Popular (Yet) in America
This App Has Developed a Special ‘Pride Month Meditation’ for LGBTQ People
English