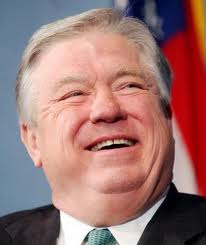 Why are Republicans so concerned about this? Do they really think there are so many soliders that are just repressing their homo desires that allowing gays to serve openly would just cause sexual chaos? I mean, COME ON! The gays are already there, Governor, and just because you allow them to serve openly doesn’t really change much.

“And it’s not necessarily over homosexuality. Its over the fact that when you’re under fire and people are living and dying of split-second decisions you don’t need any kind of amorous mindset that can effect saving people’s lives and killing bad guys.”

Gay soliders are just as patriotic and dedicated as their brothers and sisters in the military, and just because they can be open about one part of who they are is not going to change a thing. There will be no dropping of arms in favor of sex! Unfortunately.

This Artist Has Redrawn Snow White's Seven Dwarfs as Drool-Worthy Pin-Ups
46 Trans People Have Been Murdered in America in 2021
'The Queer Frontier': 5 Things You Didn't Know About the (Super Gay) Wild West
You Didn't Have to Make This, Vol. 5: The Crotch Cannon
English